Tricks to Helping All Kids Have a Happy Halloween 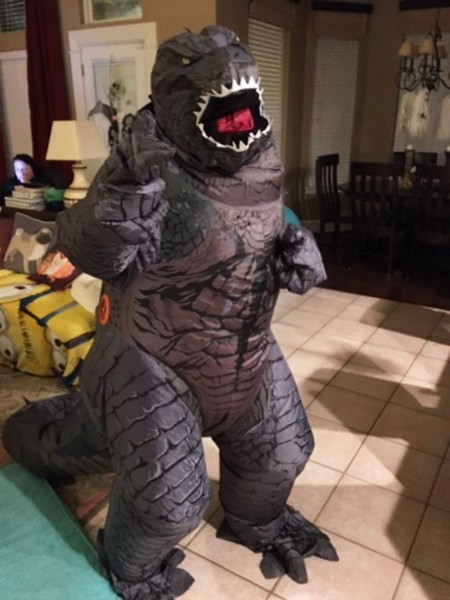 Ben Conly likes to have a roarrrrring good time trick-or-treating as Godzilla even though he's stomping around Houston and not Tokyo.

If you see Godzilla stomping through your neighborhood this Halloween night, slapping his tail on your front porch and reaching out his claws to pick out a treat from your candy bowl, be brave. We know all Godzillas can look pretty intimidating, but you can’t always judge a giant roaring reptile by its scaly tree trunk thighs. Your ferocious trick-or-treater might be 11-year-old Ben Conly. Ben, who has autism, attends The Monarch School for kids with neurological disorders and learning disabilities.

Ben’s mom, Donna, said “Ben has liked dressing up as Godzilla [for many Halloween nights] because Godzilla is one of his favorite subjects to discuss and the costume covers his face so he doesn’t have to look directly at someone handing out candy. He can also just roar instead of having to say ‘trick or treat’ which can be intimidating sometimes.”

Seventeen-year-old Zack Rodriguez also attends The Monarch School. A few years ago, Zack and his family dressed up as Men in Black from the movie of the same name. His mom, Nicola, explained how it helped Zack enjoy Halloween night. “One successful strategy for us was to create a group costume including Mom and Dad. Our family has done Men in Black but other good choices might be Justice League or Wizard of Oz, building off the child’s interest. That way it is very natural to stand by your child with autism at the door while trick or treating. We can provide direct support, prompting and explanation if needed.” 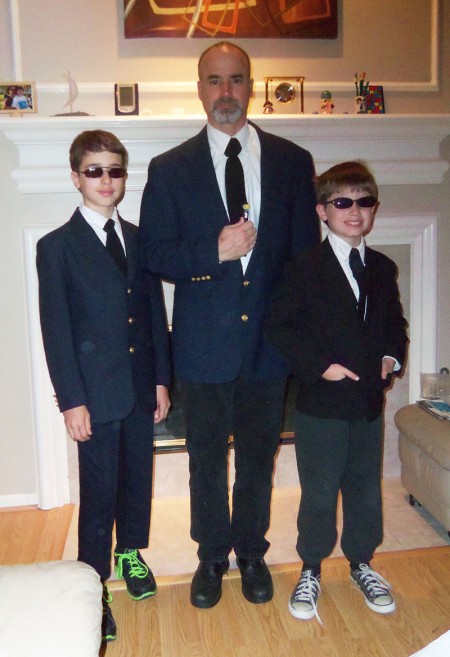 One of Zack Rodriguez's favorite Halloween nights was when he dressed up as a team of Men in Black federal agents with his dad and brother, Alexander. Pictured are (from left) Alexander, George and Zack Rodriguez.

Nowadays, Zack usually stays at home, wearing a costume and helping answer the door and distributing treats instead of trick-or-treating. Nicola said, “It gives him more communication practice, and it gives the greater community a chance to interact with him to expand awareness of people with differences.”

Eleven-year-old Zachary Dunn, who has autism, has never dressed up for a single Halloween or gone trick or treating; he has always been uncomfortable trying on costumes and the sights and sounds of Halloween were overwhelming and scary to him. His anxiety was so high that he would wear his ear defender headphones and stay in bed on Halloween night. His family would keep their lights off and not give out candy.

His dad, Mike, shares, “Ours has been a long journey with respect to Halloween. But just a few weeks ago, Zachary came up with a Halloween story about a character he created named Toother Luther. We are thrilled that he has decided to go trick or treating this year and dress up as Toother Luther. Zach’s mom and I had no idea what a Toother Luther looks like (we think it might be a cross between a vampire and a clown) or how Zachary would create it. Thankfully he went on Amazon looking at costumes and said ‘That’s ITTTTT. That’s my Toother Luther costume!’” Zachary and his parents look forward to him trick or treating this year.

If you are lucky enough to see Ben, Zack, Zachary or any of the other 1 in 59 children that have autism spectrum disorder (ASD) this Halloween, here are some friendlier-than-Casper-the-Ghost suggestions to help everyone have a boo-tiful experience.

Last year, Alicia Plumer, a mom who lives in Burus, Louisiana, shared an image of a dark blue Halloween bucket on social media to let neighbors know that her adult autistic son would be carrying a dark blue jack-o-lantern while trick-or-treating to help people be aware of their family’s situation and to how they could help her son have a happy Halloween.

Her Facebook post read, "If you see someone who appears to be an adult dressed up to trick-or-treat this year and carrying this blue bucket, he's our son! His name is BJ & he is autistic. While he has the body of a 21 year old, he loves Halloween. Please help us keep his spirit alive & happy. So when you see the blue bucket share a piece of candy. Spread awareness! These precious people are not ‘too big’ to trick or treat," she said.

The post went viral and has become an unofficial symbol of awareness for autism.

Alicia was inspired to use a blue bucket jack-o-lantern after hearing about the Food Allergy Research & Education (FARE) Teal Pumpkin Project, launched in 2014 to raise awareness of food allergies and make Halloween safer and more inclusive for all trick-or-treaters by placing a teal pumpkin or sign on your porch to let families with food allergies know your home has safe non-food treats as an option.

Here are some more helpful trick-or-treat ideas the parents of Godzilla, a Men in Black agent and Toother Luther’s shared:

Hope this October 31st leaves kids from 1-101 grinning like a happy jack-o-lantern. Happy Halloween to all!