Add Something New to Your Table This Year 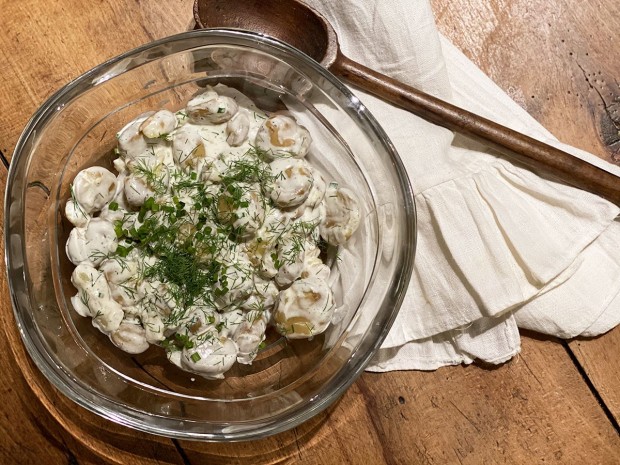 We are entering the busiest cooking week of the year.

Maybe I’m making that up. But in my house, it’s truth. The week before Thanksgiving is the one time of year you can bet that my pantry is clean, my refrigerator organized and my serving pieces at the ready. My freezer is already stocked with pie crusts, made last weekend, and biscuits, made the same day (so yummy with leftover ham).

Adding to the anticipation, I’m getting email after email from my favorite culinarians sharing all manner of twists to put on my traditional Thanksgiving menu. Replace the pumpkin pie with pumpkin flan! Deconstruct the green bean casserole! Make gluten-free dressing – you’ll never know the difference! Mostly, I’m turning up my traditional nose.

But one of those emails caught my eye. It came from Alison Roman and The New York Times: “Alison Roman makes Thanksgiving in her very small kitchen (with an extremely small refrigerator and even smaller oven.”

How couldn’t I read that? Alison is a (very funny, very real) food columnist for The New York Times and Bon Appetit and the author of the much-acclaimed cookbook Dining In: Highly Cookable Recipes and the newly-released Nothing Fancy: Unfussy Food for Having People Over. I wanted to see what her kitchen looked like, and I definitely wanted to read about what she was planning to make for the Big Day. Yes, the story gave me a peek into Alison’s tiny kitchen, and it shed light on what she considers important for Thanksgiving (bread torn for dressing, never neatly cut). It also helped me think about devising a timeline for the week’s flurry of to-dos.

And, her story gave me a new recipe to add to our Thanksgiving repertoire. New! If you know me, you know I’m not much for new. But Alison Roman’s Crushed Sour Cream Potatoes are the bomb, if I must say so. Crushed little potatoes hang out with garlic-infused cream and sour cream, and the whole thing lights up with the addition of a ton of dill and chives. Bold statement: These potatoes deserve a place at your table.

I shouldn’t admit to it, but, while taste-testing, we made a dinner of these decadently creamy, herby potatoes paired with a fall salad (think greens, crisp apple, blue cheese – we’ll share the recipe next week). Scandalous, but oh so delicious.

Step 1
Cook potatoes in a large pot of boiling, salted water until tender, 10 to 15 minutes. Drain. (This step can be done ahead of time; keep potatoes covered and warm on the stovetop.)

Step 2
Meanwhile, in a medium pot over medium heat, gently simmer the cream and the garlic until garlic is completely tender and cream is reduced by about a third (it will look slightly thicker, about the consistency of melted ice cream), 8 to 10 minutes. Season with salt and lots of pepper. Add butter and swirl to melt. (This can also be done ahead; rewarm before proceeding.)

Step 3
Using your hands or something like a small dish or bowl, crush the potatoes and place in a large bowl. Pour cream mixture over the potatoes, and season with salt and more pepper. Toss to coat, encouraging the potatoes to break down slightly but remain textured and chunky.

Step 4
Stir in sour cream, half the chives and half the dill. Transfer to a large serving bowl and top with remaining chives and dill, and more black pepper and sour cream, if you like.