The Art of The Brick: Using LEGO to Explore Humanity 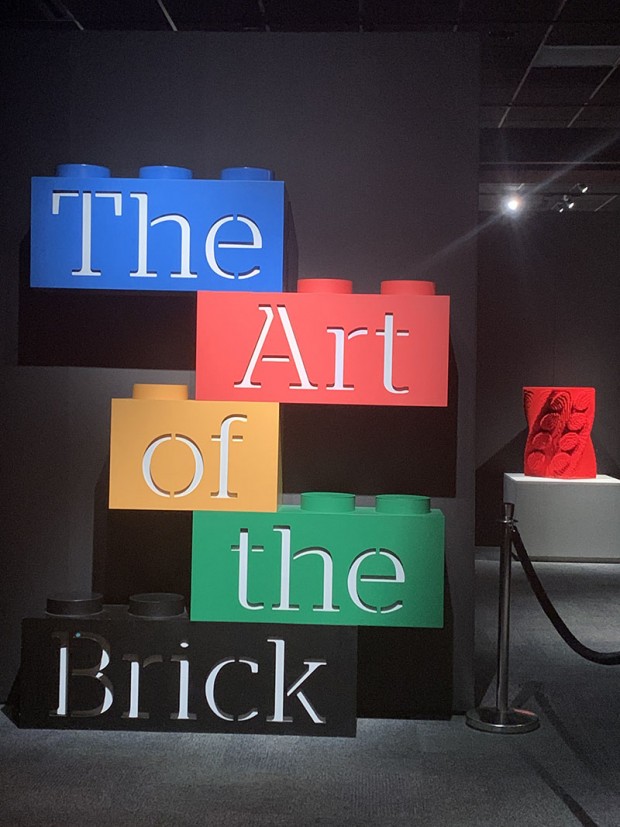 Artist Nathan Sawaya’s “The Art of The Brick” is on display at the Houston Museum of Natural Science through March 29, 2020. (Photo: Pooja Salhotra)

So says Nathan Sawaya, the award-winning artist behind “The Art of The Brick,” an exhibit currently on view at the Houston Museum of Natural Science. On display until March 29, 2020, the exhibit features a collection of artworks made exclusively from a popular children’s toy: LEGO bricks. The pieces range from reimagined versions of world-famous treasures such as Da Vinci’s Mona Lisa and Edvard Munch’s The Scream, to original sculptures such as a dinosaur skeleton made from more than 80,000 LEGO pieces and whimsical creations like a row of over-sized crayons.

“I decided to become an artist that uses LEGO bricks for my medium because it makes the art very accessible,” Sawaya said. “Families who may have never been to an art gallery are drawn to my exhibitions […] They can connect with the art on a different level because they have played with the toy before. It is about the democratizing of the art world.” 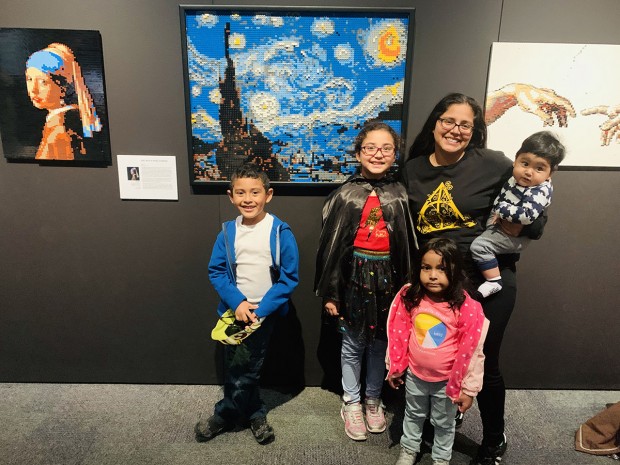 Mom Diana Prado brought her three children (from left) Alex Prado, Elena Prado and Santiago Prado plus her niece (at front) Aria Cruz to check out “The Art of The Brick.” (Photo: Pooja Salhotra)

The diversity of pieces makes the exhibit attractive to children and adults alike. The first gallery, titled “Past Masters,” has recreations of works such as Van Gogh’s Starry Night. As I walked in, I found myself closely examining the sculptures, trying to discern how Sawaya managed to create such a range of shapes out of a single rectangular block. Meanwhile, one mom viewing the gallery with her three young kids and niece was using the gallery to teach her kids about some of the world’s masterpieces.

Perhaps this is exactly what Sawaya intended with this gallery. A placard on the wall features a quote from Sawaya stating: “I first learned adjectives through School House Rock. I learned how to count to ten through Sesame Street. I learned about gravity through my Slinky. Imagine if a child learns about art history through LEGO!” 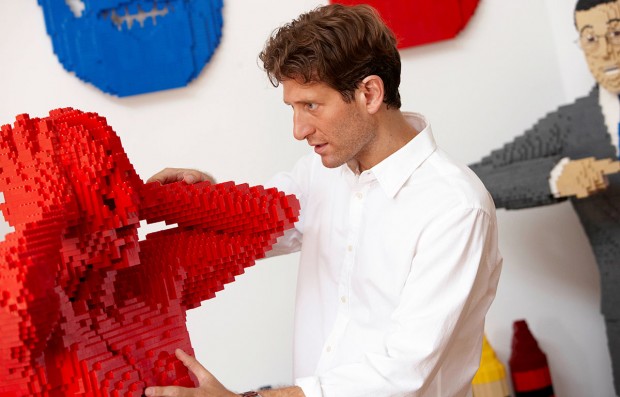 Award-winning artist Nathan Sawaya is the first to ever bring LEGO to the art world. (Photo: Dean West)

Sawaya’s path to the art world is far from traditional. After Sawaya graduated from college at NYU, he went to law school and became a corporate lawyer in NYC. Sawaya says that at the time, he didn’t have enough faith in his art to pursue it as a full-time career. But after long days at the law office, he’d blow off steam by creating art, whether it was through painting, drawing or sculpting out of various media.

“Eventually my apartment was packed wall-to-wall with art,” Sawaya said. “I put together a collection of sculptures on a website as a virtual gallery. Eventually, I was getting commissioned to create works of art.  And the day the website crashed from too many hits, I decided to make a change in my life.  I left my day job behind to become a full-time working artist.”

As someone who left law school and opted to pursue creative writing instead, I found Sawaya’s path from corporate law to sculpting inspiring, and I was interested to see how this decision that Sawaya made 15 years ago manifests in his art. 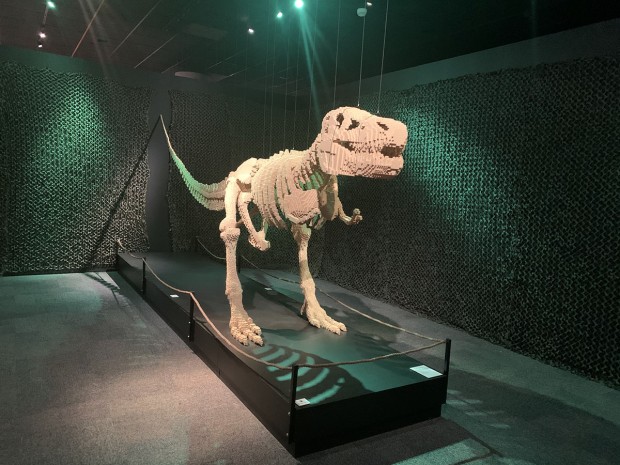 The largest sculpture in the exhibit, this piece is made up of 80,020 LEGO pieces. (Photo: Pooja Salhotra)

One piece, entitled “Grasp,” depicts a man trying to walk forward, while multiple hands are pulling him from behind. It’s a piece symbolizing Sawaya’s career change. “Grasp is about my transition from lawyer to artist,” he said.  “So many folks told me I was crazy, and that I shouldn’t do it. I had to break away from those people.”

Another piece titled “Pointing” depicts an arm reaching upwards, with the index finger pointing towards the ceiling. It’s accompanied by a placard that reads “Following a path is important, but sometimes you need to point your own way to go.” This piece seems to represent what Sawaya felt when he decided to create his own path.

“It was scary, but also completely liberating,” he told me. “I was in control of my own destiny, and the first morning I woke up after leaving the law firm was the beginning of what has turned out to be a truly thrilling adventure.”

Ultimately, while some pieces in “The Art of The Brick” reflect Sawaya’s personal path, there’s something for everyone in the exhibit. We can all resonate with the heart-wrenching pieces on love and loss and feel inspired by thought-provoking pieces like “Yellow” and “Green Torso” that seem to be about personal growth. And it’s hard not to smile at the playful creations like the peace sign or the massive game of Jax made of LEGOs. 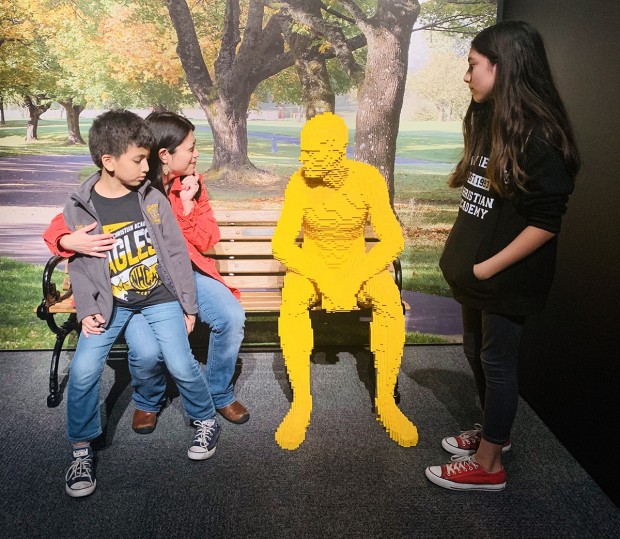 As one viewer, 10-year-old Maddie Lechuga, put it, “It’s just so cool how he takes something so tiny, the LEGO pieces, and turns it into something so big and interesting.” 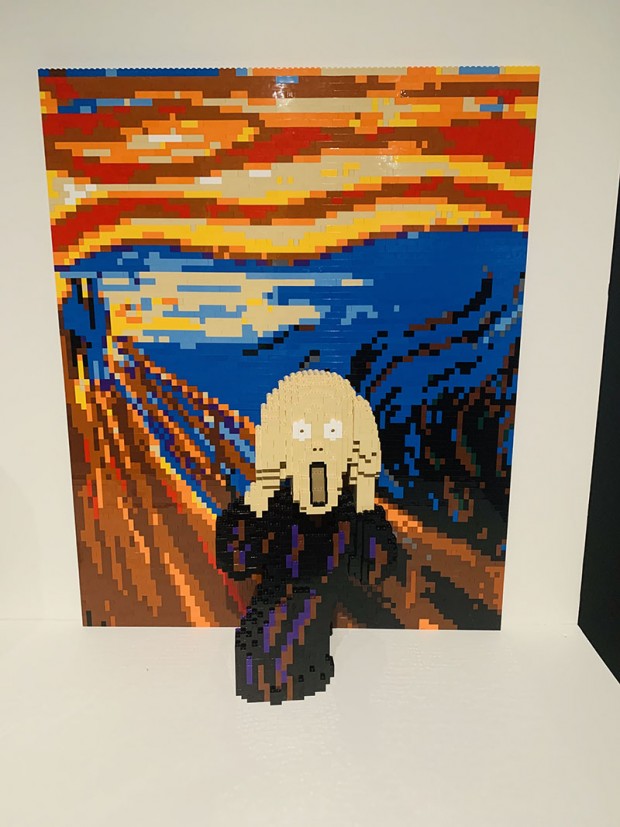 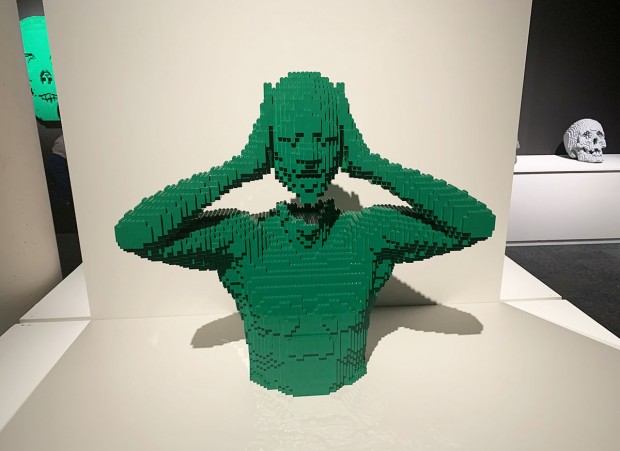 Titled “Green Torso,” this sculpture is made of 8,905 LEGO pieces. (Photo: Pooja Salhotra) 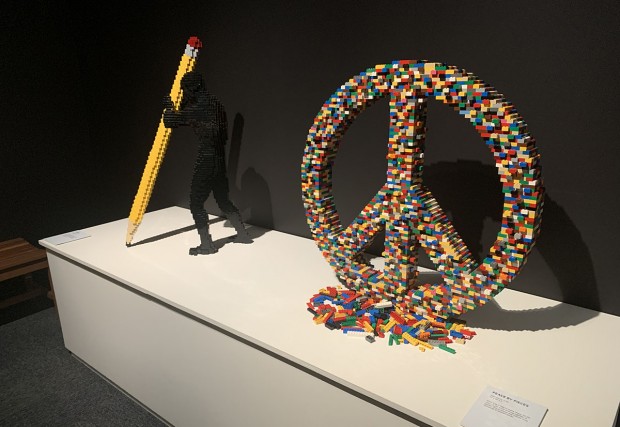 One room of the exhibition features whimsical sculptures like this peace sign created from thousands of recycled LEGO bricks. (Photo: Pooja Salhotra)