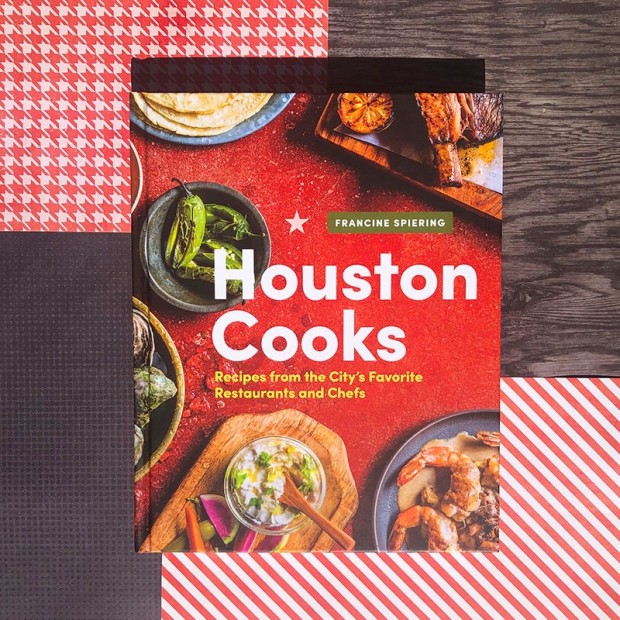 Andria Frankfort, who writes the Back Porch Table column, and I continue to enjoy collaborating on cookbook reviews and recipe testings. This week, we are highlighting a fabulous new local cookbook entitled Houston Cooks: Recipes from the City’s Favorite Restaurants and Chefs by Francine Spiering, a food writer and blogger who lives here in Houston.

Houston Cooks focuses on 40 restaurants in the Greater Houston area and includes a wide variety of cuisines mirroring the diverse and eclectic population that calls Houston home. The book is organized alphabetically by restaurant starting with Atlas Diner HTX and ending with TRIBUTE at The Houstonian. Spiering also groups the recipes by category, such as Appetizers and Small Plates or Mains, at the front of the book and includes a lengthy index at the back to aid readers in finding the right recipe.

“Houston takes pride in its wide-open arms, and the immigrants who’ve settled here have enriched our cultural and culinary landscape. With over 145 languages spoken here, it’s no wonder that Houston is one of the most ethnically diverse cities in the U.S. Translate that into cuisines, and that’s a gastronomic world tour within the city limits,” says Spiering wrote in the introduction. Houston chefs are finding ways to couple culture with innovation and creativity resulting in a “colorful culinary tapestry, a conflation of gastronomic diversity and local and international food traditions.”

While Houston Cooks is a cookbook, it also provides a glimpse into the everchanging and cutting-edge restaurant scene in Houston and highlights the numerous award-winning chefs that reside here in our city. In the one-page summary about each chef, the evolution of both the chef’s career and the current restaurant(s) is traced. While some of the individuals have lived in Houston for a long time, others are newer to the city and bring with them their experiences in other cities and sometimes countries.

Most of the recipes are not complicated, but as in most cookbooks, some will take longer than others to prepare. The book is filled with a wide variety of dishes, and the Shrimp and Grits from Harold’s Restaurant and Tap Room, Pork Belly with Sweet Potato Hash and Guajillo Sauce from Field & Tides, and the Sweet Corn Bisque with Crabmeat and Crispy Bacon from Common Bond are high on my list to make.

One of my favorite aspects of Houston Cooks is that I now have a long list of new places to dine. Some of the establishments included are favorites of mine including The Dessert Gallery and Brasserie 19, but there are several with which I was unfamiliar such as Field & Tides, Rudyard’s Pub and Theodore Rex, and numerous others that I have yet to try including Harlem Road BBQ, Cacao & Cardamom, and Sparrow Cookshop. Another outstanding aspect of the cookbook is the photography – it is beautifully done and features a photo of each chef, the recipes included and often the interiors of the discussed dining establishment.

While Houston’s restaurant scene is thriving, Spiering also references the fact that nearly 20 percent of Houstonians face food insecurity. The nonprofit Second Servings of Houston rescues unused food from hotels, sports venues and other retail outlets and delivers it the same day to approved charity sites such as shelters and soup kitchens. In an effort to support Second Servings, Spiering has decided to donate a portion of the proceeds from the sales of Houston Cooks to this nonprofit. (Read more about Second Servings here.)

The beauty of Houston Cooks is its appeal to both foodies and those who enjoy glimpses into local culture. Leave yourself some time to browse the entire book because once you pick it up, you will not want to put it down.

Editor’s Note: See Back Porch Table by Andria Frankfort tomorrow for a recipe from Houston Cooks: Recipes from the City’s Favorite Restaurants and Chefs. Francine Spiering will be one of the authors at the December Conversations from a Page event. And to see other collaborations between Andria and Cindy, read about Mixtape Potluck and the Beach House Cookbook.