Live Music in Houston This November 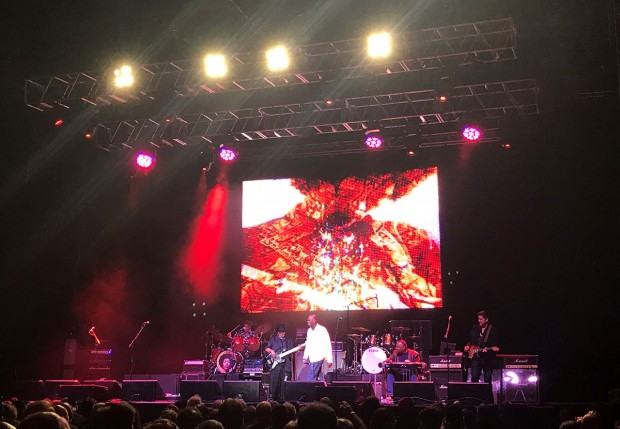 Haley Kurisky took this photo from the recent “Experience Hendrix” show at Revention Music Center. Musicians gathered to pay tribute to Jimi Hendrix by playing some of his big hits.

Can you believe we are in the next-to-last month of the year? The holiday rush is almost upon us. Sneak some time before that to go listen to some live music this month - we have some great performances in Houston this month. And if you’re not wanting to spend a bunch of money on a concert ticket, check out some of the free events like the Dia de los Muertos celebrations or the free performances at Miller Outdoor Theatre.

Nov. 2: Día de los Muertos @ Karbach
In celebration of Día de los Muertos, Karbach is hosting an art show and local market along with live music performances from a mariachi band and The Slags. There will be food, face painting, and other themed activities.

Nov. 2: 5 Seconds of Summer & The Chainsmokers @ Toyota Center
This isn’t a combination I would’ve put together, but I’m in favor of it. 5SOS is the boyband that toured with 1D for their last big stadium tour. The Chainsmokers are the DJ duo with hits like “Closer” and “Roses.”

Nov. 5: Post Malone @ Toyota Center
Post Malone is known for putting on a great show, and he keeps putting out hits. Go see him while he’s in his prime.

Nov. 6: Tedeschi Trucks Band @ Hobby Center
Having recently seen both Tedeschi and Trucks perform (at the Crossroads Fest in Dallas!), I can confirm that they are still awesome. Tedeschi is an unbelievable singer and guitarist, and Trucks is known throughout the rock and blues community as a fabulous guitar player. This is live music at its finest. Expect little talking and lots of jamming.

Nov. 9: Texas Medical Center Orchestra @ Miller Outdoor Theatre
The TMC Orchestra is performing the score from Ellis Island: The Dream of America with interpretations from young actors at the Emery Weiner School. It’s an ode to immigrants and the American Dream. As always, tickets are free upon reserve.

Nov. 10: The Band Perry @ The Studio at Warehouse Live
The Band Perry is a country band known for songs “If I Die Young” and “Better Dig Two.” The three band members are all siblings, and are trying to make the move from country to pop.

Nov. 10: Joe Walsh and Friends / VetsAid @ Toyota Center
This is the 3rd annual festival put on by Joe Walsh, benefitting VetsAid, a non-profit that helps veterans. All proceeds go to veterans charities. This year, performers include ZZ Top, Sheryl Crow, the Doobie Brothers, Brad Paisley, and others.

Nov. 11: Sara Bareilles @ Smart Financial Centre
Sara Bareilles can really sing (Who DOESN’T love “Love Song”?) and has the catchiest songs. This would be such a fun show to see.

Nov. 12: The Black Keys @ Toyota Center
The Black Keys last released an album in 2014, but longtime fans are excited about the opportunity to see the band together for their first tour in a while. Modest Mouse will also be performing.

Nov. 14: Two Door Cinema Club @ White Oak Music Hall Lawn
TDCC is an indie-pop band with a happy and fun sound. PERFECT for the lawn at White Oak. Fun fact: The band members are from Ireland!

Nov. 16: Simple Plan @ Revention Music Center
You know rock band Simple Plan from songs like “Welcome to My Life” and “I’m Just a Kid.” They were an early 2000s staple, but who says you can’t appreciate a throwback?

Nov. 16: Jon McLaughlin @ The Bronze Peacock at House of Blues
Jon is a pianist and singer-songwriter who has toured with many bands, including one of my favorites (Cowboy Mouth)! Beyoncé has covered his music, he wrote a song that appeared in the Amy Adams movie “Enchanted,” and he wrote music for Demi Lovato. If you haven’t gotten the gist, this is a really cool person who knows a lot of other really cool people.

Nov. 18: Willie Nelson @ Smart Financial Centre
Willie Nelson is arguably one of the most interesting musicians there is. He has had an extensive career spanning six decades and considers himself not only a musician but an artist, author, and philanthropist. Smart Financial is the perfect intimate-yet-elegant setting for a night with Willie.

Nov. 20: Alessia Cara @ Revention Music Center
Alessia Cara is only 23 years old but has an amazing voice and a stellar tour record. She has performed at various awards shows and always does a great job.