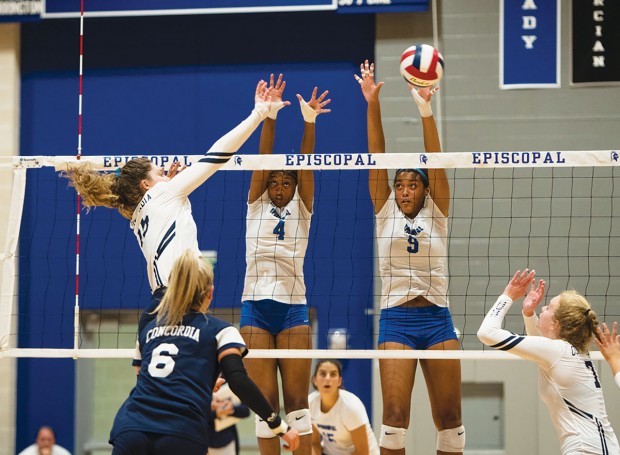 REJECTION Juniors Sania Petties (#4) and Cimone Woodard (#9) are part of a powerful lineup for the Episcopal Knights volleyball team. The duo are among several Knights who’ve already committed to play collegiate volleyball.

Behind a lineup loaded with major collegiate prospects, the Episcopal Knights emerged as one of the top high school volleyball programs in Texas. Deep into the season, the Knights owned a lofty 22-2 record, including several victories over large UIL 6A powerhouse programs. In fact, Episcopal finished third at the prestigious season-opening Adidas John Turner Volleyball Classic, which included most of the top-ranked volleyball programs across the state.

“We have a big and strong attacking lineup,” said head volleyball coach Amanda Watts. “I’ve coached a lot of talented teams and players over the years, but nothing that compares to this group.” The Knights powerhouse lineup includes five players who’ve committed to major Division 1 programs.

Senior outside hitter Trinity Watts, the daughter of Coach Watts, will play next at Liberty University. Junior twins Bria and Cimone Woodard have committed to Texas A&M, junior right-side hitter Sania Petties will play at Mississippi State, and sophomore middle blocker Morgan Perkins has committed to the University of Oklahoma.

In addition, Watts had high praise for several other players, including senior Brennan Howell, who’s been a standout starter since her freshman season, as well as junior setter Camille Hanna, who has also started since her freshman year. “Besides all this talent, what’s also really unique about our group is the team chemistry,” added Watts. “Even our practices are intense and competitive. They play against the top team in conference daily, and that’s each other. Every person on our 14-person roster truly contributes to our success.” 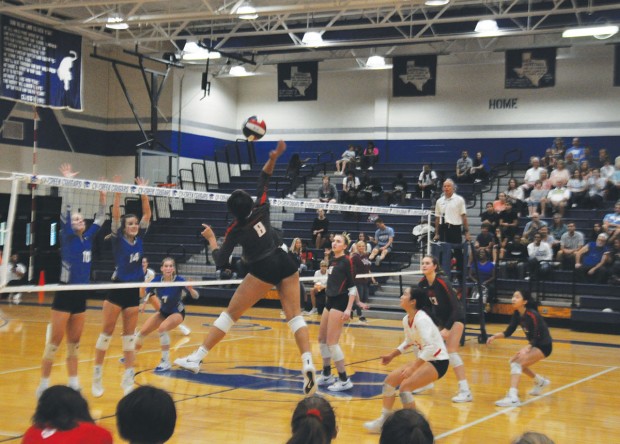 POWERFUL PUNCH Memorial Mustangs junior outside hitter Lauren Elie soars up high for a powerful spike in a recent Mustangs victory. Late into the season, the Mustangs owned a 26-10 record with victories over many of the area’s premiere volleyball programs.

It’s the start of a new coaching era for the Memorial Mustangs volleyball program under the direction of Kaddie Platt, who fills the position left by the retirement of longtime Mustangs head coach Beth Gammill. Gammill taught and coached at Memorial for 38 years while securing over 500 victories during her illustrious tenure with the Mustangs.

“Coach Gammill left a great team here with a lot of experience, so it’s been a pretty smooth transition,” said Platt. For her part, Platt brings extremely impressive coaching credentials to the high school level, having been the head volleyball coach at the University of Houston for the last seven years. Prior to that, Platt coached volleyball at HBU for 17 years.

Deep into this high school season, Memorial owned a 26-10 record with victories along the way over top tier Class 6A programs such as Cy Fair, Clear Springs and Katy. Leading the team in kills is junior outside hitter Lyla Traylor, with several other players making major contributions. Junior Kingsley Wallace, a 6’4” outside hitter, is a standout player who’s committed to West Point. In addition, Coach Platt lauded the play of senior middle blocker Brooke Duncan, junior outside hitter Lauren Elie, senior libero Abby Hwang and junior setter Logan LeRoux. “Our whole team is a really positive group who work hard and want to be good.” 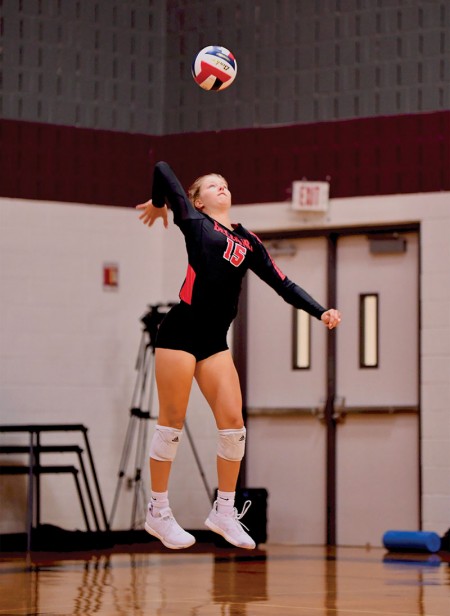 CARDINALS ACE Bellaire Cardinal Emily Hawes led her team in service aces for the third consecutive season. The senior standout is a four-year varsity starter for the Cardinals.

Deep into the season, the Bellaire Cardinals volleyball team was well on its way to a 20th straight trip to the post-season playoffs. In fact, the Cardinals hadn’t even dropped a single set while going undefeated through the first half of the district race. “I think coming off last year where we really didn’t play that well the kids were determined to not let that happen again,” said Cardinals head volleyball coach Ap Clarke.

Clarke, who’s coached the Cardinals program for all 19 of its consecutive playoff appearances, also credits a tough non-district schedule for the team’s success. “We finished in the Gold Division of the big John Turner Classic in Pearland, and then competed well in the Clear Creek tournament and Kingwood Invitational. We beat some good teams, like Seven Lakes out of Katy, which was a great win for us. We also had nice wins over Stratford, Clear Brook and Fort Bend Austin. It really prepared us well for district.”

The Cardinals lineup includes a dynamic duo at the libero position in senior Emily Hawes and sophomore Nylah Raspberry. “Both are playing a huge row at that key spot,” said Clarke. Clarke also credited the play of senior middle hitter Armyni Perales and junior outside hitter Clarke Adams. “Clarke is playing in all six rotations and is doing a lot of great things, and Armyni is hitting and blocking well. She’s a real spark for our team.”