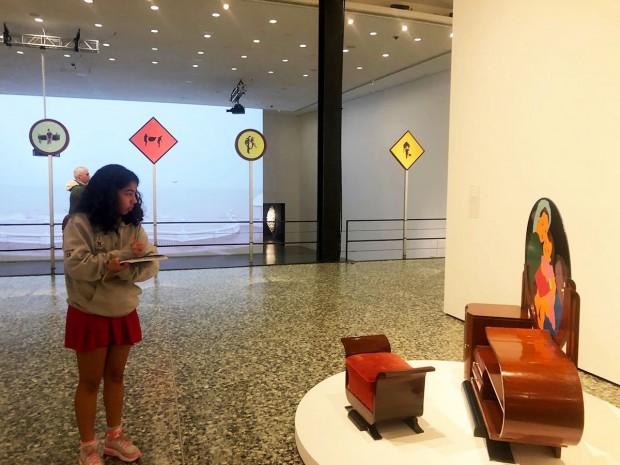 Eliot Aiman looks at a piece of furniture painted by Beatriz González.

Vibrant yellow and blue hues depicting the Spanish Civil War capture the breath of many of the students entering the room. Canvases, furniture, curtains fill their line of sight.

On Thurs., Nov. 14, all 10 Spanish III classes embarked on a field trip to the Museum of Fine Arts, Houston to see the Beatriz González exhibit. Half of the sections visited the museum in the morning while the other half attended the exhibit in the afternoon. Students ranging from all high school grade levels, predominantly sophomores, had the opportunity to study and interpret the works of this “pop artist.”

Spanish III teacher Sherifa Meguid Kehs discovered this art exhibit and decided to coordinate with fellow Spanish III teacher Aline Means to plan the details. The field trip was approved by both the team and Head of Upper School Hollis Amley.

In previous years, Spanish III students have attended the Picasso Prado Spain exhibit and The Menil Collection. Because the students study art vocabulary later in the year, Kehs is always looking for interesting events happening that she can take the students to. Kehs decided to choose this exhibit because González was an artist that Kehs had not heard of before, so she also had the opportunity to learn along with her students. Secondly, she believes that the course focuses heavily on Mexico and Spain. Kehs thought that it was a unique exhibit to see a Colombian woman who is also considered more of a radical artist and one where a lot of her work is in response to political situations in Colombia.

“It was super interesting to me to see such a horrible political climate with lots of tensions in Colombia portrayed in such a colorful, pop manner,” sophomore Lucia Valderrabano said. “I thought it was interesting how she played with the colors for that.” 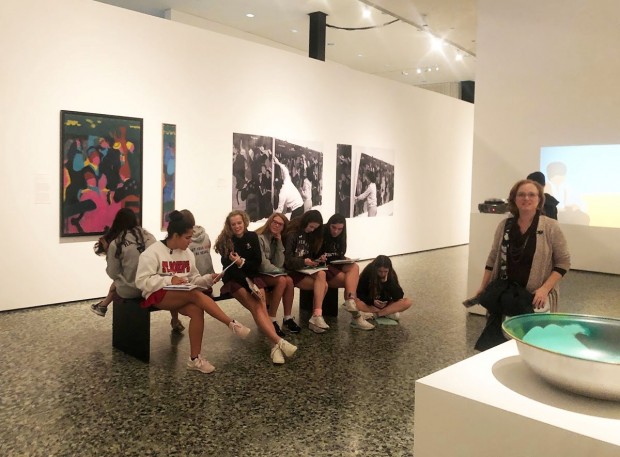 The goals of this field trip were art appreciation, learning about famous latinos, and being able to discuss art in Spanish. Because there are lots of opportunities and events in Houston, Kehs believes that it is “wonderful” to combine what is going on in the city with what is going on in class. From talking with her students, she could see that a lot of them enjoyed the trip and the art. She says that she was pleased with the results in class when she saw that her students could talk about and deeply discuss the works that they saw.

“As we get older, we get fewer field trips and opportunities to go to places like museums since we have a lot of work during the weekend,” sophomore Lexie Leitner said. “This trip allowed me to learn a lot about the culture and internal affairs of Colombia that I didn’t know before or had any idea of. The art was also beautiful.”

Kehs and the rest of the Spanish III team hope to have more field trips in the future. The exhibit at MFAH will finish in January, but Kehs is always looking for more ideas, even events other than museums.

“I think it was a good experience for most of the students,” Kehs said. “Art is a unique thing; everybody appreciates it in a different way and has their own opinions on what is art and what is not. But, I feel like that particular exhibit had something for everybody because it wasn’t just the painting - it was the furniture and the sculptures and the curtains."