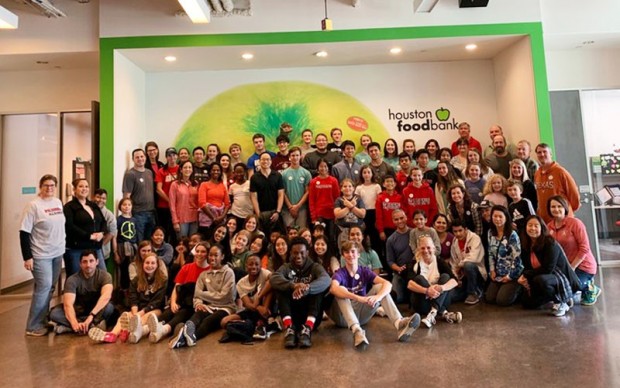 Mavericks pose for a photo at the Houston Food Bank.

When people think about Thanksgiving break, images of turkey legs drowned in gravy and plates piled with stuffing and sweet potatoes topped with marshmallows surround peoples’ minds. In the excitement of the holiday season, people often neglect the actual spirit of gratitude. To give back to their community, 300 St. John’s community members gathered at the Houston Food Bank to pack and assemble food for those who would not be able to enjoy decadent meals that others typically would.

While at the Food Bank, the SJS group worked in the warehouse where they unpacked boxes, sorted various food items and put food in new boxes where it could be removed for storage, or distributed.

“It is important to think about those who struggle with food insecurities year round, but during the holiday season, it is a nice way for communities to come together,” sophomore Eliot Aiman said.

After completing four hours of volunteer work at the Food Bank, the SJS group had sorted enough food to help thousands of people struggling with food insecurity.

While students were initially skeptical about the idea of a schoolwide event, their concerns were soon relinquished once they saw everyone work together.

“The purpose of making [the Food Bank] a schoolwide event is to really connect the different divisions of St. John’s and to make it known that you can give back no matter what age you are,” Aiman said.

From kindergarteners to seniors, members of the SJS community worked together just before the holiday season to help those with food insecurities.

10:00 am to 5:00 pm
Location:
The Houston Design Center
END_OF_DOCUMENT_TOKEN_TO_BE_REPLACED