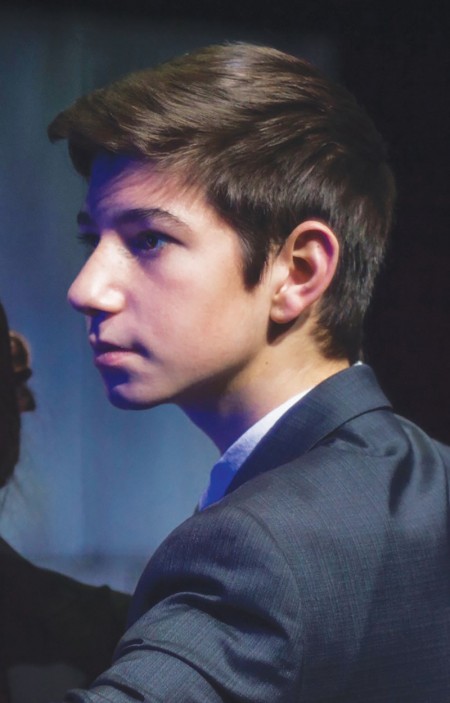 IN THE MOMENT Jordan Sheldon, a junior at Kinder High School for the Performing and Visual Arts, says participating in the arts is an opportunity for stress relief and staying present.

I needed an escape more than anything. Consumed by thoughts about last night’s regrets, my endless supply of junior year homework, and finishing the spring cleaning which had worked its way into the fall, all I could think about was how I would tackle the mound of tasks life threw at me on this very day. As the hours flipped by, I painstakingly completed each task, all the while second guessing myself. What if I don’t finish everything today? I was looking too far into the big picture as opposed to actively pursuing each task, causing myself a great deal of stress and anxiety.

In today’s society, with instant communication via social media/smartphones, we tend to overload our brains more than ever, having to constantly respond to texts or remember to make a birthday post for some dude you met in junior high. It’s no wonder that mental illnesses such as stress and anxiety have become a prevalent issue in the 21st century. We, humans, need a creative outlet that relieves us from our fast-paced society and enables us to be more present.

The arts and performing have helped me temporarily escape a world that demands constant organization and control. Through acting, I am able to enter a room, leaving behind whatever happened outside, and step into the shoes of another being, or character. Performing a scene, I push myself to live in the moment so I can respond and react honestly to my partner’s words. Likewise, when drawing and painting, my strokes and scribbles allow more creative expression than the open circles on an ACT scantron. When I’m singing and playing my guitar, I am so overcome with the sound of the chords that thoughts of my reeking pile of undone laundry cannot disturb me.

Perhaps your escape lies in making sushi, shooting hoops, or hiking the daunting hills (ok, mounds) of Evelyn’s Park. Whatever the activity is, it should present itself as an opportunity to unplug. We need a constant reminder of our humanity in a world that can turn us into robots if we let it.