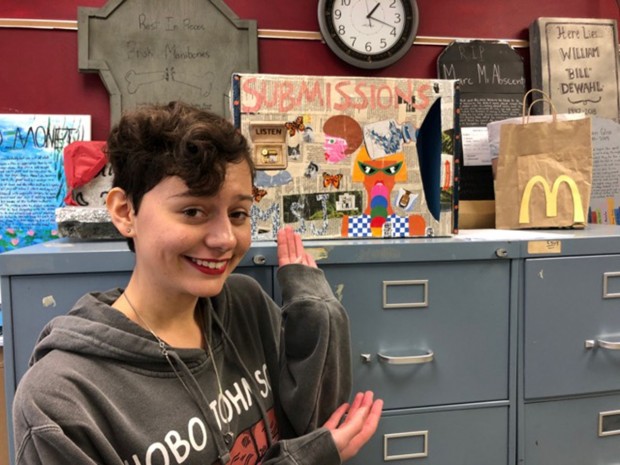 Abbie Hart, a Maple Street Journal editor, with the submission box in the club sponsor’s room.

Television and movies tend to portray high school as a dramatic experience - brooding students, rivalries, sporadic choreographed dances - all things that make for good entertainment. But what is this experience truly like? Away from the effects of the rather distorting silver and small screens, how do students feel about the high school experience? One of the most authentic portrayals of this formative time comes from high schoolers themselves, specifically through their art, poetry, stories, and photography.

This year at Bellaire High School, a new means in which the creative messages of students can be spread has emerged: the Maple Street Journal. Maple Street Journal is composed of a group of student editors, myself included, who hope to publish an authentic body of work from their fellow Bellaire High School students in a literary and art magazine. The editors receive submissions that will be accepted until late spring and will then be printed and sold in a hardcopy format for anyone to purchase - something easier said than done.

When urging students to submit their art or writing, I often receive a response with a reluctant tone. Students are too embarrassed, too shy, or too busy to share their creativity with their peers. Even if they wanted to, students often say there is no time. It is discouraging for editors like Ellery Strength, who is eager to see more submissions in the Spring semester. “We want to hear from people. It’s always frustrating talking to someone about MSJ and then being shut down, because I know everybody has the potential to contribute. We all do. I wish people had the confidence in themselves to see that, but maybe this semester that could change.”

With currently a total of 15 submissions, Maple Street Journal has hope and is nonetheless excited to share the work they have received so far. After all, the feat of publishing the high school literary journal has been achieved before.

Maple Street Journal is nothing new to Bellaire High School, which has been in print most of Bellaire High School's history up until the early 2000s. The goal of this year’s editorial board is to successfully revive the journal and reinstate it to its former glory among the ranks of the school newspaper, the Three Penny Press, and the yearbook, the Carillon.

In its first incarnation, the journal was sponsored by a now-retired English teacher. Editors would gather all of the submissions, a variety of work which included poems decorated with hand-drawn ink borders and essays to name a few, at the teacher’s house where they assembled journal’s pages. The journal was much like today, except that there was no social media or Google forms, which today allow for electronic submissions. Instead, everything was done by hand, except for the printing of the final product on a slow and antiquated copier.

Today, Maple Street works a little different than in the '80s, but the goal is still the same; to unite Bellaire High’s enormous student body through art and literature, with a unique and authentic message created by students, for students - a tradition which will hopefully endure for years to come.