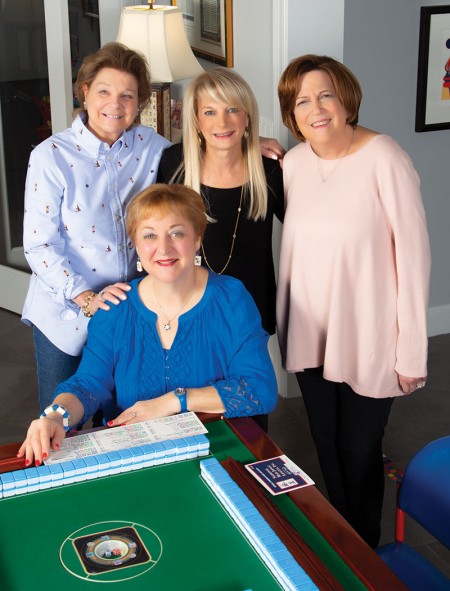 The clacking of the tiles is a tell-tale sign. So are the groups of people seated around square tables, choosing and discarding rectangular, colorful tiles adorned with birds, numbers and symbols. Listen carefully and a whole new world of words comes tumbling out: “pungs,” “kongs,” “charleston.”

Across Buzz neighborhoods, residents gather in homes and clubs to play a game celebrating its centennial in America this year. Originating in China, mah jongg, which translates to “clattering sparrow,” is a game of luck and skill – and it’s experiencing a red-hot renaissance right now.

This is not your grandma’s mah jongg game.

“I heard the tiles in utero,” laughs Linda Freedman Block, the regional president of Hadassah and a mah jongg aficionado. “My mom played mah jongg every day in the 1950s, and I have been playing for 36 years. I cannot get enough of it!” And true to her word, Block is deeply invested in the game and eager to share her passion. 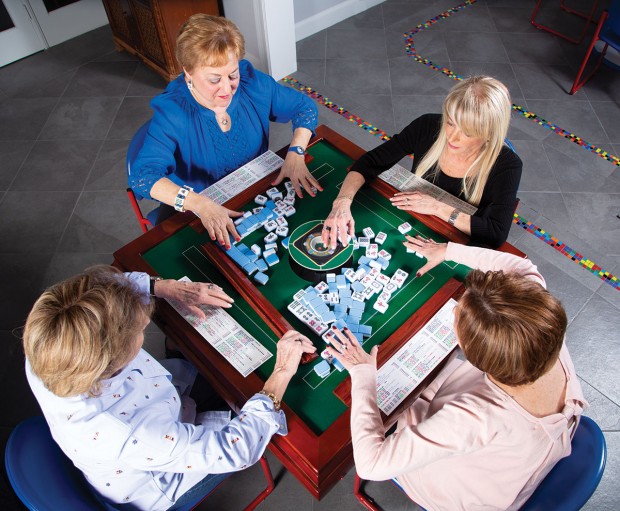 “On a good week, I am in three games: one Chinese mah jongg and two American mah jongg,” she says. “Plus I sometimes pick up extra games. Our groups will play four to six hours a day.”

Although Block’s mother played during her youth, the experience did not come full circle until Block began playing in earnest when she herself was a mother, pregnant at the time with son Brian. “Some girlfriends asked me to play, and there were 12 of us,” she says. “We had two or three tables each week, and it was a great way to get out at night. Our husbands took care of the kids and it was good girlfriend time – there’s nothing better than that.”

Since then, Block has upped her game and gone on to compete in national mah jongg tournaments and teach others how to play the game that she loves so dearly. “I have taught more than 500 people,” says Block, everywhere from the Jewish Community Center to senior living homes to classes in her own home. "I love to see when people ‘get it!’” 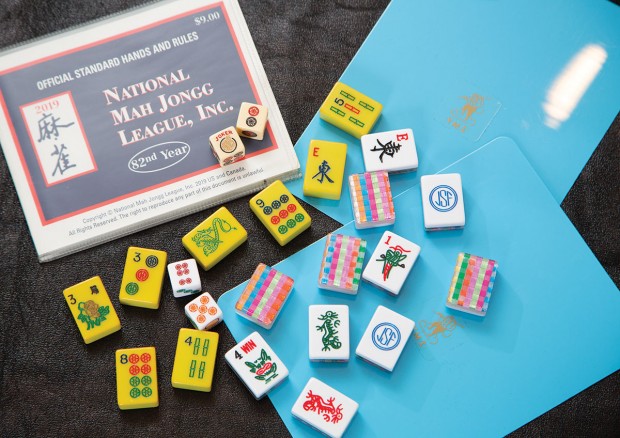 Susan Magaziner was one such student, who excelled to the point where she now plays in one of Linda’s groups. “About 10 years ago, when my son was a senior in high school and I was about to become an empty nester, one of my friends came to me and said, ‘Do you want to play mah? And I said, ‘No way, it’s an old ladies’ game!,’” she recalls, laughing. “But my friend convinced me and got a group of six of us. I am a natural gamer, but I was the last one to catch on to mah jongg. I struggled, but once I got it and it clicked, I became obsessed and I played seven days a week. Linda is known as ‘the mah maven of Houston,’ and when she asked me to be in a group, I knew I had finally made it.”

Getting the game to “click” is rewarding, players say, because mah jongg does require concentration and memorization. The game is played using tiles (which are divided into suits called bamboos, craks and dots), racks (a stand to place the tiles, as well as to push the tiles out), dice – and the card. “You win the game when all 14 of your tiles match a hand on the card,” says Block.

“When we get the new card every year, I wait by the mailbox every day for it to arrive,” says Magaziner, half-joking. “My husband knows to not talk to me for a week and within 10 days I have the whole thing memorized.”

The card, which is released every April, provides the patterns of hands that are played for that year. The hands have varying degrees of difficulty, with a monetary amount (ranging from 25 cents to 75 cents) attached to each hand, paid out to the winner.  “Every year in American mah jongg, there is a card created by the National Mah Jongg League with different, varied hands that you play with 152 tiles, which includes eight flowers and eight jokers,” says Block. “In contrast, in Chinese mah jongg,  you don’t play with jokers or flowers. There are set patterns with a ton of possible combinations.”

Players say the game is always fun because the new card requires ever-changing memorization and challenge. “I was totally intimidated at the start, and I thought there was no way I will learn how to do this. But for me, the test is: Can I drink wine and play mah jongg?” quips Betsy Mercer, laughing. “But I am not there yet. Every time I drink wine I suck. The game does take a lot of mental gymnastics.” 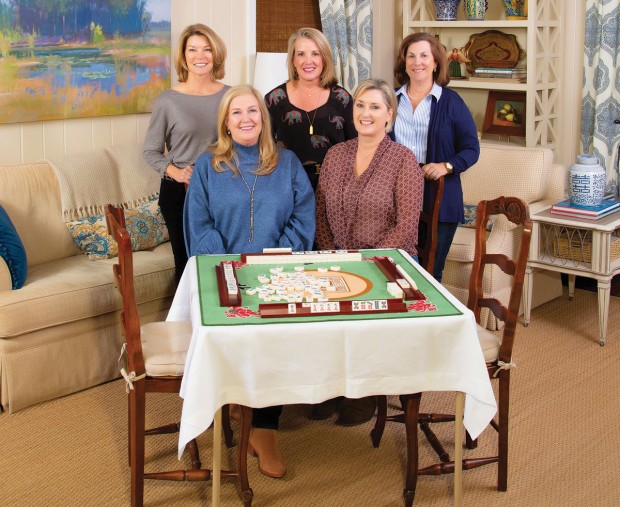 Amy Reid started Mercer’s West U group three years ago. They have 13 members, and they play every Thursday, rotating houses and hosting the games with food and drink. Creatively, they communicate all of their plans via the GroupMe app.

Mercer says the betting makes the game even more competitive. “We are baseball moms and we bet,” she says. “Whatever the card is, we double it.”

Across the board, the biggest draw in mah jongg, however, seems to be connecting with friends. “What I look forward to each week is half camaraderie and half it is an interesting game," says Allison Strawn, who plays with a group of six every Wednesday at The Briar Club. “To me, playing is like a puzzle, and it is very gratifying to solve a puzzle.” 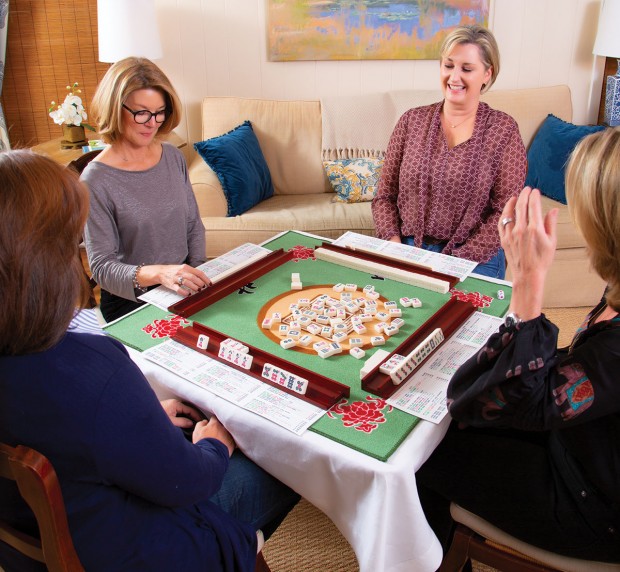 Amy Reid’s mah jongg group has their cards ready to play their next game. (Photo: lawellphoto.com)

Jennifer Saucer, who plays in Strawn’s group, agrees. “One friend said we had to learn how to play so we don’t get beat when we are in a retirement home one day,” she says, laughing. “I love the mental aspect of it and I love the social aspect of it – we are all genuinely concerned about each other.”

The group asked Claudia Selzer, an avid player, to give them mah jongg lessons, which Saucer believes helped them learn the right way. “Claudia started with the basics so we had a good foundation to build on, and she taught us in a way that we could understand. We all decided to go on a field trip to Where the Winds Blow after three weeks of lessons,” says Saucer, referring to the mah jongg supply and gift store in southwest Houston. “It was so much fun picking out our tiles. We felt like we were ready to play because we had our monogrammed mah jongg sets done!”

Joan Mauel, who plays with Saucer and Strawn, says their group, having just formed nine months ago, seems a little late to the party – but they are delighted to finally get in on a game others already knew about. “It has meant a forced couple of hours a week to think about nothing but patterns, and I think that is a good thing to use your brain in that way. Everyone in our group is lovely. I am thrilled to be a part of that,” says Mauel. “I think mah jongg is becoming super popular all of a sudden.”

Or maybe it always was, and it’s just now being experienced in new and different ways. Robin Lindley, who plays in Reid and Mercer’s group, says that even though they have been playing for three years, she has watched her mother-in-law play for decades. “She has all kinds of antique and vintage tiles,” says Lindley. “The tiles are just so unique. That’s also part of the fun. My mother-in-law has collected tiles from different antique shops and festivals.” 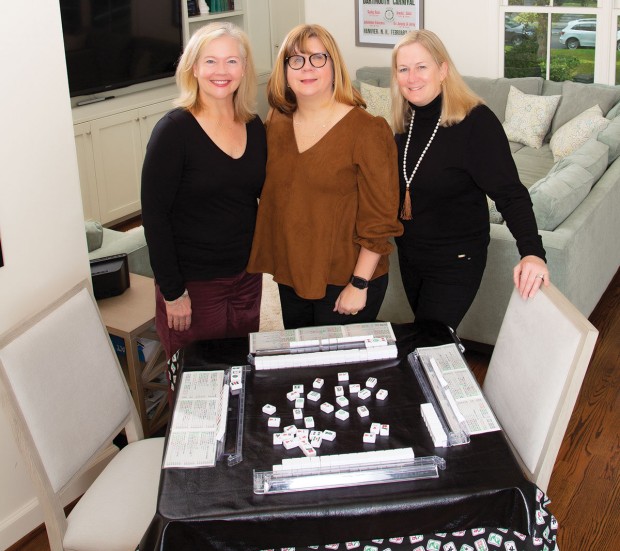 GAME ON Joan Mauel, Jennifer Saucer and Allison Strawn (from left) enjoy the camaraderie they get from playing mah jongg every week together at The Briar Club. (Photo: lawellphoto.com)

Besides collecting antique sets to play with, players can also challenge themselves by going online. “I play on a mah site online with live players every night,” says Magaziner. “My husband laughs at me, but I have made so many friends and we will make it a point to meet up at mah jongg tournaments.”

Block has something that is revolutionary in the mah universe: an electric mah jongg table, which shuffles the tiles at the press of the button. “My table is really special because I won it for a first place in a mah jongg tournament!” she says.

“When mah jongg came to the United States in the 1920s, back then all the bubbies [a term of endearment for a Jewish grandmother] played. Now it has become so widespread,” says Magaziner

“Mah jongg is a game you can play with all ages, and I have played with people from their 20s to their 90s. To play, you have to be so alert and so aware of everything,” says Block. “It has been proven that mah jongg is so good for the mind and without question keeps you sharper as you age. I would say anyone who is even slightly interested should jump in feet first and take a class or find a friend to teach them. It’s a mind-stimulating game where you need to think quickly, and it’s social time spent with friends — it is the best.”