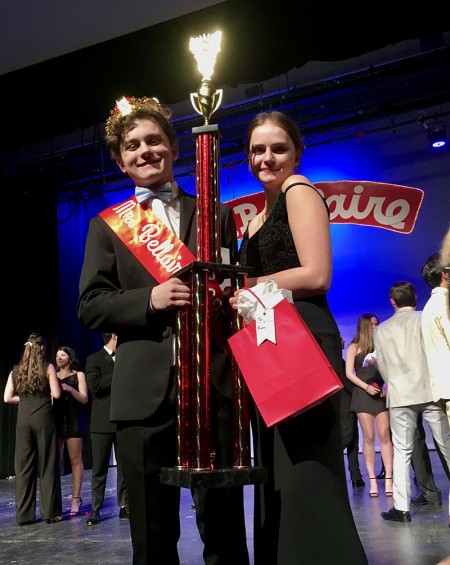 On the evening of Jan. 29, in the Bellaire High School auditorium, the lights dimmed, the curtains parted, and Mr. Bellaire began.

What is Mr. Bellaire? It’s an annual pageant where a group of boys from the graduating class, along with their escorts, take part in a costume contest, a dance number, and a talent show.

When the show began, the contestant pairs were introduced in their costumes. Starting off this section were Soheil Esmaeili and Giulia Sdringola, dressed as Aladdin and Princess Jasmine. Ethan Towber and Ashlyn Holly, dressed as John F. Kennedy and Marilyn Monroe, were a crowd favorite. Next up was the beachwear and group dance section. The contestants ran on stage in their swimwear as their interests were announced by the MC. Then, they all participated in a group dance number. The next section was the talent show. Michael Batten sung "Take Me Home, Country Roads" by John Denver. Jack Pittman performed a magic trick with the help of volunteers from the crowd. Noor Jahlul did a comedy set. Preston Jong danced to "All of Me" by John Legend and "Leave Me Alone" by Flipp Dinero.

After that, the contestants and their escorts changed into their formalwear. The five finalists were announced: Dany Ramirez, Preston Jong, Lloyd Ford, Nathan Schlitzberger and Gene Gopon. They were each asked a question by the MC for the interview portion and the judges considered their answers before announcing the runner ups-and the winner. Coming in fourth place was Lloyd Ford. In third place was Preston Jong. Dany Ramirez and Nathan Schlitzberger were tied for second.

And finally, the crowned winner of Mr. Bellaire 2020 was Gene Gopon. Gene and his escort Julie Fitsch-Mouras dressed as Mary Poppins and Bert for the costume portion. Gene sang and played the piano to "Piano Man" by Billy Joel for the talent show. “I kind of signed up for Mr. Bellaire as a joke, but once I got into it I realized I should get serious about it because so many people were putting in a lot of effort to make sure the show went smoothly,” Gene said. “I did not think I would get to the final five. Winning was unexpected. The most memorable part was when all my friends jumped on stage after I won and celebrated with me.”