Cindy Burnett interviews local author Chris Cander (pictured), who lives in West U and is actively involved in the Houston literary community. Her latest novel is The Weight of a Piano. (Photo: Lauren Vollness)

This week I decided to interview local author Chris Cander. Her latest novel, The Weight of a Piano, has received numerous accolades and is a stunningly beautiful tale. She is a resident of West University Place and is actively involved in the Houston literary community. I thought it would be fun for readers to learn more about her and the story behind for her latest novel.

What inspired you to start writing this latest novel?
Not long after I lost both my grandmothers, I overheard a woman talking about finally letting go of a piano her father had given her when she was a child. She’d been taking lessons for a few months when he suddenly died, and afterward, it became a symbol of her grief -and also of him. She didn’t play it, but also couldn’t get rid of it. It struck me how heavy certain possessions with provenance can be, and I knew then that I wanted to unpack that idea in a novel.

How long have you been writing?
I came to writing the same way Mike Campbell in Hemingway's The Sun Also Rises went bankrupt: "gradually and then suddenly." As a child, I wrote poems. Stories, letters, and journals in my teens and early 20s. For more than two decades I wrote articles and essays for health and fitness, family, and lifestyle magazines. But it wasn't until I was in my late 30s that I wrote my first novel.

What comes first, the plot or the characters?
Typically, ideas are carried into my imagination on the shoulders of their protagonists, though as I mentioned, this novel was inspired by an event (that of a girl being given a piano by her father, who then dies shortly thereafter). But even the most compelling events don’t carry a story forward; it’s how the people who endure these events react to them, revealing their unique qualities and, hopefully, something about human nature in general.

How do you come up with the title(s) to your book(s)?
In this case, the title is a double entendre. There's the psychic, emotional weight of the piano in the characters' lives, which grows heavier and heavier for different reasons, and the actual physical weight, which makes it not only a symbolic burden but a real one. (By the way, this particular Blüthner weighs 560 lbs. That's a lot of piano to drag through a desert - and a life.) 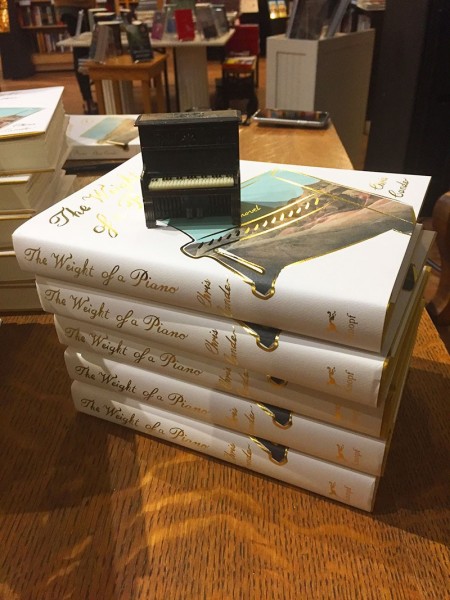 The Weight of a Piano has received numerous accolades, and the book just came out in paperback in December.

Do you have any say in what your book cover(s) look like?
Typically, authors don't have contractual rights to make the final cover (or even title!) decisions, but most publishers want their authors to be happy with the design. The first mock-ups my editor sent me didn't capture the essence of the novel at all. I asked if the designer might consider, if not an actual piano, then the suggestion of one, and also the possibility of using an image from Death Valley's otherworldly landscapes. Within a few hours, the designer came up with the final cover, and I could not have been happier with it.

What is the most difficult part about writing for you?
No matter how many books I've written, or the degree of success they've achieved, each time I start a new novel I have the same panicky feeling that I've forgotten how to do it, I'll never be able to do it again, I'm a hack and a fraud. After a certain amount of predictable hand-wringing, I confront the blank page and begin.

How do you do research for your books?
When I started working on The Weight of a Piano, I knew nothing about pianos. I'd never been to Death Valley National Park. I didn't know what it was like to live as a Refusenik in Soviet Russia. So I had to rely on the experiences and knowledge of others who did. I spent countless hours interviewing professional musicians, piano tuners, composers, and movers to learn the myriad aspects of piano playing and ownership. I spoke many times with the 85-year-old owner of the oldest Blüthner piano dealership in the U.S as well as a generous marketing contact at the Blüthner factory in Leipzig, Germany. I visited Death Valley, and photographed a tiny, antique metal pencil sharpener that looked like the novel's eponymous piano. I talked with Jews who'd lived behind the Iron Curtain and escaped. Not only did I learn what I needed in order to write the book, I received an incredible education in matters I might not have otherwise explored.

Can you share something with me about your book that is not in the blurb?
The blurb talks about the two protagonists, Clara and Katya. But I consider the Blüthner in my novel a protagonist, too. She - I think of it as a she - has lived a long and interesting life. Like Shel Silverstein's tree in The Giving Tree, she's given all she has to those who loved her. Over the years, she's quietly absorbed all the grief and longing and joy and exultation expressed through her action, the impression of every touch and every tear shed at her keyboard. By the end of the book, she feels like a very old woman, an ancient and childless babushka with little left to offer. Strange as it may sound, I feel a psychic connection to her even though she doesn't speak and I don't play music. I think it was from a desire to hear her express her emotions that I decided to commission a piece of music by a professional composer, Konner Scott, which became part of the novel. That piece is "Die Reise" and readers can listen to it on the novel's page on my website.

What do you hope your readers take away from your book?
I'd be honored if readers could lose themselves in the pages of the book - and find something of themselves there, too.

What was the highlight of writing this book?
Being surprised, again and again, by the characters as they revealed themselves to me.

Are you working on anything at the present that you would like to share with me?
The current political climate in our country has provoked in me an insomnia-inducing concern about the thoughts, emotions, and actions that can draw people together or wrench them apart, and the wounds they inflict on others as they try to heal themselves. I'm working on a new novel that examines those themes.

What are you reading now?
The Far Away Brothers: Two Young Migrants and the Making of an American Life by Lauren Markham and Where We Come From by Oscar Cásares.

What do you like to do when you are not writing or reading?
In addition to taking care of my family, I practice taekwondo, teach women's self-defense, and volunteer with organizations that help Houston's immigrant and homeless populations.

Share something your readers wouldn’t know about you.
I used to be a firefighter. (And still miss it.)