West U Community Embraces the Season of Giving 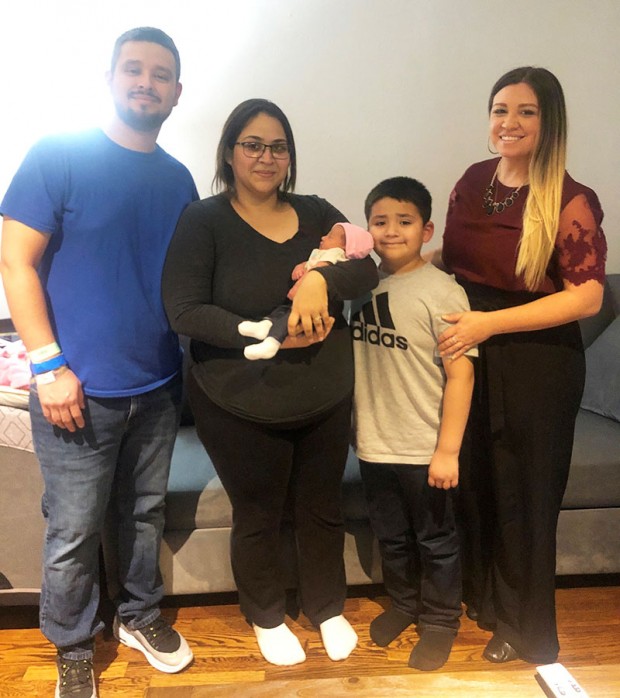 At a time of year that’s filled with indulgent consumption, the West University community epitomized what this season is really all about: giving.

On Dec. 5, West University Elementary School welcomed a new student, third-grader Diego Morales. Diego might seem like your typical eight-year-old: he has a friendly demeanor, he enjoys school field trips, and he was looking forward to unwrapping presents on Christmas Day. But Diego was facing circumstances unlike any of his classmates. His family had recently moved to Houston from Progreso, a town in the Rio Grande Valley, because Diego’s brother Victor required cancer treatment from MD Anderson. Victor, 11, has been battling bone cancer since he was eight years old, and, after he stopped responding to chemotherapy, was sent to Houston for an experimental drug treatment.

When Diego’s third-grade teacher, Rachel Treviño, learned about the Morales family’s situation, she was moved to help.

“When [Mrs. Yesenia Morales] told me [Victor] was on palliative care, that really resonated with me because my mother was diagnosed with stage IV cancer, and she battled it for seven years before she passed,” said Rachel, a native Houstonian. “I not only felt sympathy, but I felt empathy because I understood exactly the situation she was in.” 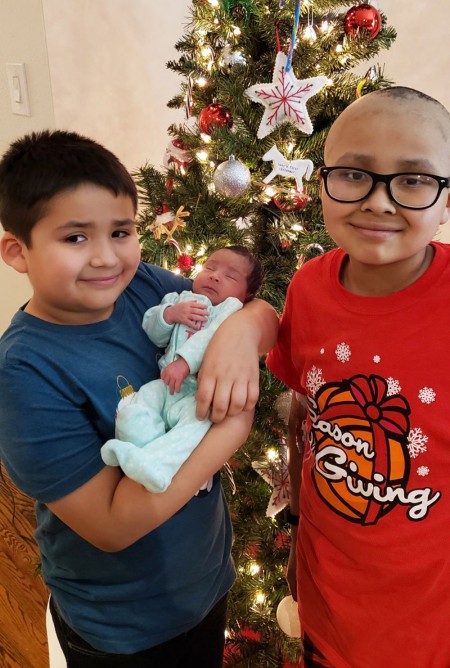 Victor Morales was discharged from the hospital on Christmas Eve. Here, Diego (left) and Victor (right) are celebrating Sofia’s first Christmas together at A Shelter for Cancer Families. (Photo: Morales Family)

Victor was discharged from the hospital on Christmas Eve, and a CT scan next week will reveal whether the experimental treatment is successfully killing off the cancer cells in Victor’s body. While Victor was not responding to chemo, the cancer spread to other areas of his body including his lungs and pancreas.

On top of battling cancer, Rachel soon learned, Yesenia was expecting another baby in December. Although the Morales family was receiving support from A Shelter for Cancer Families – a non-profit organization that provides housing and additional support to out-of-town families receiving cancer treatment at MD Anderson – Rachel could only imagine the financial and mental stress the Morales family faced.

Less than a week after Diego joined Rachel’s third-grade class, Rachel reached out to her students’ parents, informing them of the family’s hardship and asking them if they could help in any way. She then looped in the school administration, and assistant principal Amber Pinchback took on the responsibility of collecting baby gifts from faculty and staff.

But Rachel felt she hadn’t done enough. So she widened her ask, reaching out to her own family and friends through Facebook and even posting on a West U community group. “Hello Everyone! I’m a third grade teacher at West U and wanted to reach out to this amazing community because I am feeling it in my heart to share this,” the post began. The post included Rachel’s personal Venmo and PayPal account information where donors could send money, along with her email address where the community could send cards and kind words.

Within two hours, Ms. Treviño had already collected $1400 dollars, and with every minute came more messages with prayers and donations.

“I got a bigger response than anything I had ever anticipated,” Rachel said. “I could barely keep track. Messages were coming through left and right.”

Only one week after her initial post on Facebook, Rachel had collected $6,750 in cash for the family, plus gift cards, baby items, and Christmas gifts for the Morales kids. Donors ranged from West University administrators to strangers who had gotten word, to the crossing guard at the school who donated a bassinet he no longer needed. 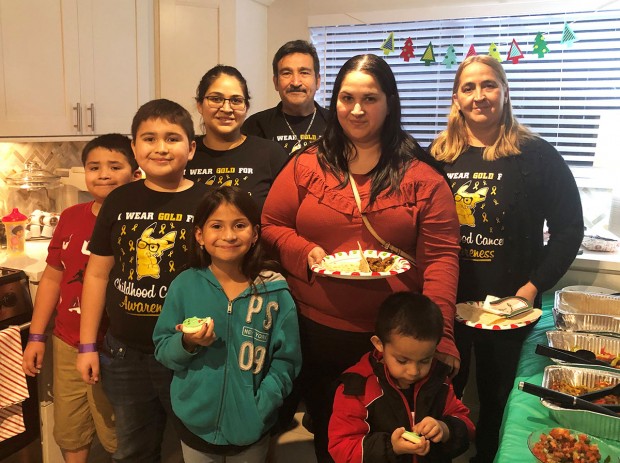 The extended Morales family gathered to celebrate Christmas together. (Photo: A Shelter for Cancer Families)

On Dec. 19 – just two days after Yesenia delivered her baby girl Sofia – Rachel and administrators from West U Elementary visited A Shelter for Cancer Families, located within West U at 4115 Drake St., to surprise the Morales family with the check and gifts.

“[The family] literally had no words,” said Amber. “They were completely shocked. It took some time for them to process and to understand. It was a humbling experience to be there in their happiness.”

Yesenia said she had no idea the West U community was collecting donations for her family, and she’s deeply grateful for the support from people, most of whom she has never even met.

“Sometimes you’re just speechless by the amount of love you receive from people who don’t know you,” Yesenia said on Christmas Eve. “The people who donated didn’t do it because they had to, they did it because they wanted to, and they did it with their heart. We can feel the love.”
Editor’s Note:  For information on how to volunteer with A Shelter for Cancer Families, visit the website here. If you are interested in donating to the Morales family, reach out to Rachel Treviño at [email protected].