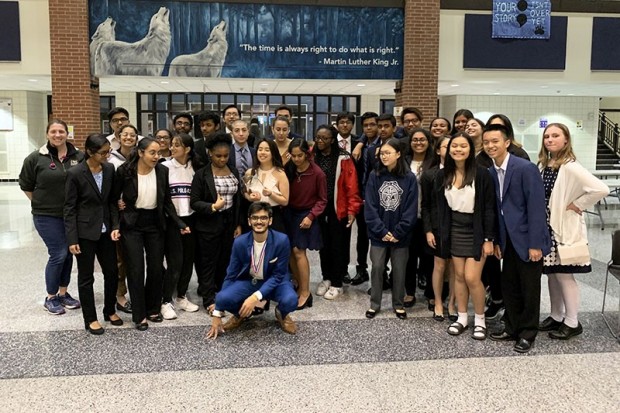 I have been competing in Houston’s Urban Debate League (HUDL) for a long time, but only recently did I realize the full impact of this organization on urban debater’s lives, especially in greater Houston.

Houston Urban Debate League is an organization comprised of over 40 high schools and 12 middle schools across Houston. HUDL gives students the opportunity to compete in debate tournaments at both the local, state, and national levels. This month, HUDL is hosting its annual City Championship tournament. Students compete in three tournaments prior to this in order to qualify. The winners in every event win $1500 in scholarship money, supported by Andrews Kurth Kenyon. This money and the NAUDL qualification have always been a driving force in students’ motivation to improve their skills. Students train all year and frequently over the summer at camps to develop research skills, speaking skills, and connections to collaborate on cases.

HUDL also has an award every year for Squad of the Year. This is awarded to one school every year. The winning school has the most points total that year, calculated by how many wins the team has total. The winner is then slated back to 0 points to give other teams a better chance at getting the award. Up until two years ago, DeBakey won the Squad of the Year award consistently, but then this rule was implemented. The award was our biggest accomplishment every year, so losing it was devastating to our team, even the freshmen who hadn’t been around for very long.
This year, no one expected DeBakey to accumulate enough points over the year to bounce back to the other schools in a matter of two years. Winning the award was an amazing way to end our season this year. DeBakey’s culture has always been hyper-competitive so HUDL’s awards gave our entire team a reason to put in twice as much effort. It also contributed greatly to our team bonding.

In a few weeks, I will be competing with about 30 other Houston students for the chance to go to the National Association of Urban Debate League’s national tournament. Whether I make it or not, HUDL has imparted onto me some very valuable skills and left me with a circle of new friends I would even call family.

Blood Drive at The Health Museum

11:00 am to 5:00 pm
Location:
The Health Museum
END_OF_DOCUMENT_TOKEN_TO_BE_REPLACED