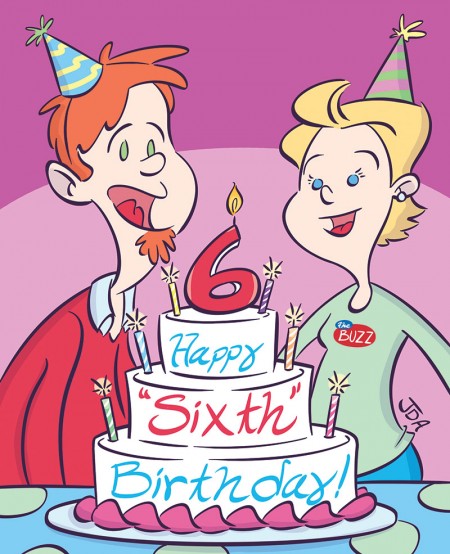 SIXTH BIRTHDAY, 24 YEARS For those of us born on Feb. 29, official birthdays are few and far between. (Illustration: behance.net/runamokstudios)

I never really understood leap year. Didn’t get why we had one year, sometimes, with an extra day. Huh?

That’s all to say that you probably don’t want anything significant to happen on Feb. 29. You won’t be able to commemorate it annually – only every four years. So when the doctor’s office tried to schedule my first child’s birth (a c-section; she was breach) on Feb. 29, I said no way.

Most people don’t have that choice.

That same year, Mickie Strait was due to deliver her first son, Jackson, now a sophomore at A&M, on March 4. “On the 28th,” she remembers, “I was leaving work, and I just didn’t feel well. My friend said, ‘What if you’re in labor?’ I said, ‘I’m not. I am not having a leap year baby.’”

During the night, though, Mickie continued to feel bad. When she and her husband Bill went to the hospital, “I broke down and sobbed,” she says. “I was willing it not to happen. I asked the doctor, ‘Isn’t there anything we can do?’ But Jackson came right in the middle of the day on Feb. 29. Bill said, ‘Think about it, he’ll have a cool birthday. It can be a pickup line!’ But I told Bill that was not a good pickup line, and it was a good thing we met in high school if he thought it was.

“I was sad for him to only have a birthday every four years. When he was 3, Jackson came home from preschool crying because his birthday wasn’t on the calendar. Trying to explain leap year to a 3 year old? I hardly understand why we have leap year.”

Twenty years later, I wondered if having a leap year baby had turned into something fun. “Jackson’s [two] brothers think it’s hilarious and awesome,” Mickie says. “His youngest brother tells him he’s really the youngest. But it still annoys me!”

Teresa Sisro was born on Feb. 29, eight Feb. 29ths ago, at 12:19 a.m. (“How old is she now?” would be a great trivia question at the dinner table tonight.) “They were in shock that it came so close to not being on the 29th,” the executive assistant says of her parents. “My dad tried to pay off the nurse to change my birthday, but she couldn’t legally do it.”

Teresa says she didn’t notice that her birthday was special until fifth grade or so. “My parents would give me a birthday party on the 28th or the first,” she says. “At first I did feel a little bit cheated. The teachers wouldn’t have anything for me at school, and my parents would have to tell them we could celebrate on the first. But when my parents made it, ‘Oh, you can have two birthdays,’ then it was okay.

“I’ve never met anyone with the same birthday,” she says. “When I get my ID checked when I go out, they’ll have a reaction. Or when I’m at the DMV, they’ll say, ‘Your birthday’s not popping up,’ and then they’ll realize.”

Having had so few “official” birthdays, Teresa’s parties have been mostly kid-themed. “When I was 16, all my friends surprised me at Chuck E. Cheese because I was turning 4. And last leap year, I got all my friends and went to Pump It Up. When we got there, they said, ‘Where are the kids?’ They were a little confused.”

One of Teresa’s friends remembers the party: “All of us 20-somethings had an absolute blast,” she says. “It was so funny celebrating that way. And, yes, we did go out for drinks afterward!”

As of this printing, Teresa hasn’t decided how she’ll celebrate this Feb. 29. “Everybody’s asking me what we’re going to do. Maybe go-karts and mini-golf, or maybe we’ll go way back and go to a roller rink.”