Just as I finished recovering from Weekend 1 of Galveston Mardi Gras, it was time for weekend 2.

Friday night was Tilman Fertitta's annual San Luis Salute. The theme this year was Ice Garden, in line with the Scandinavian Knights of Momus theme. Upon entering the Galveston Convention Center, which was converted into a winter wonderland, guests were greeted with an ice tunnel (with gigantic ice sculptures of Vikings) and drinks that lit up. The curtains opened to the ballroom, featuring aerial dancers and violinists, all dressed in sparkly white. Gigantic centerpieces with flowers frozen in ice lined the tables. The decorations really fit the theme well and brought the idea of Ice Garden to life. 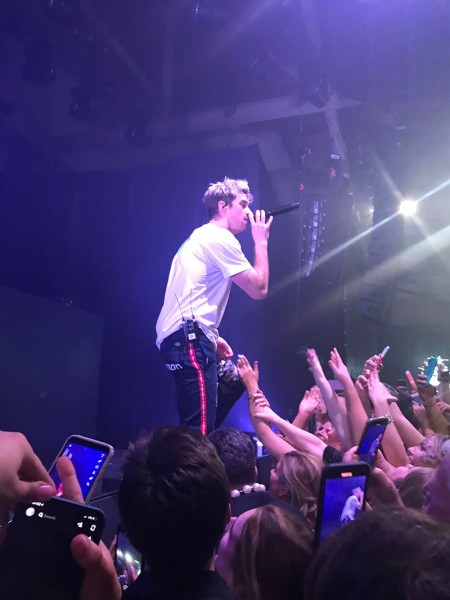 The guests of honor, including the hostesses - the Fertitta family - processed through the entrance, followed by the Knights of Momus Duchesses. Other guests of honor included UH President Renu Khator (Go Coogs!) and Houston Police Chief Art Acevedo, among others. Guests took their seats at their tables and began dinner as the opening musical performance took the stage - The Big Beyond, one of the country's hottest live cover bands. Some took to the dance floor early, while others dined on lobster cannelloni, filet mignon and decadent desserts.

After dinner, the main event of the night took the stage - The Chainsmokers! I pushed my way up to the front with my friend, Ellie Smith, and we managed to fight our way to the front row, even touching the main singer's hand (twice for me!). They performed all their hits, with some surprise samplings from popular songs. Fire and steam exploded whenever the bass dropped, and the crowd went wild when confetti burst from the ceiling. It was a performance I'll never forget - old and young alike danced to the music. The Big Beyond returned to the stage after The Chainsmokers were finished, and partygoers continued to dance the night away. It was a late night, but well worth it.

Saturday was a late start for everyone who had gone out the previous night. As tradition, my family hit up the Knights of Momus Parade Day party, throwing beads during the daytime to revelers below. The KOM day party is always held at the Roof Garden on the Strand. This year, in keeping with the Scandinavian theme, the balcony was strewn with flags from various Scandinavian countries. You couldn't miss us. Around noon, a parade came through, and we all grabbed as many beads as we could before heading out to get ready for the evening festivities. 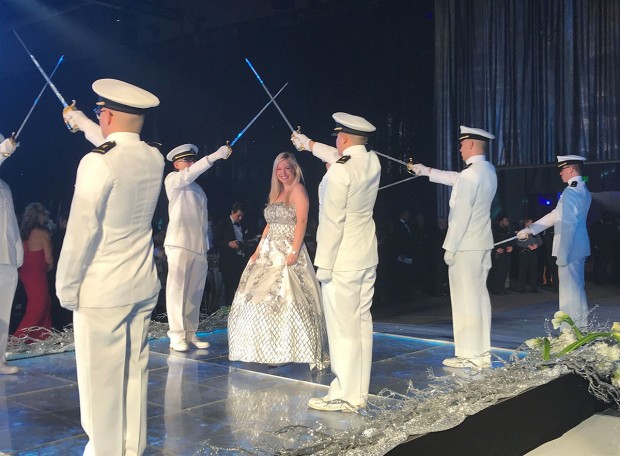 The Grand Parade in Galveston is put on by the Knights of Momus, so the floats all featured some sort of Scandinavian influence. Because my sister, Holly, was a Duchess this year, she rode on the Duchess float, and we waited all night from the Tremont House (the site of the KOM evening party) to watch her come by. She only threw us a couple of beads, but I forgave her. The parade was moving pretty fast, after all!

As the parade ended, the Duchesses met family and friends back at the Tremont House to celebrate the end of two long weekends. Light bites were served, including mini shrimp tacos, salmon, egg rolls, and deviled eggs. We caught all the beads we could from the rest of the parade (the heavier the bead, the more likely you'll get whacked in the face, but it's all in good fun) and danced the rest of the night to the sounds of the DJ.

It was an absolutely wild weekend and a perfect end to Mardi Gras Galveston. I hope all the other partygoers had a wonderful time this weekend - Laissez les bon temps rouler! 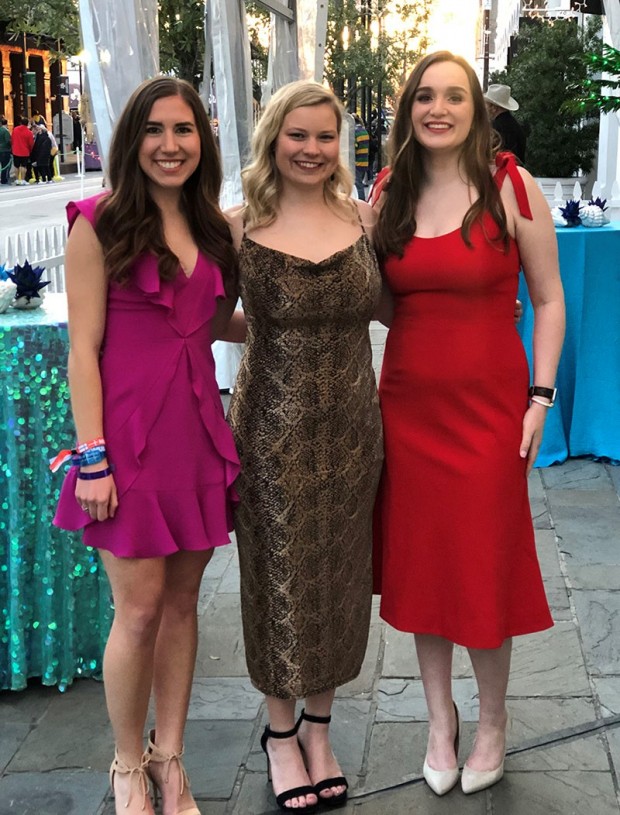 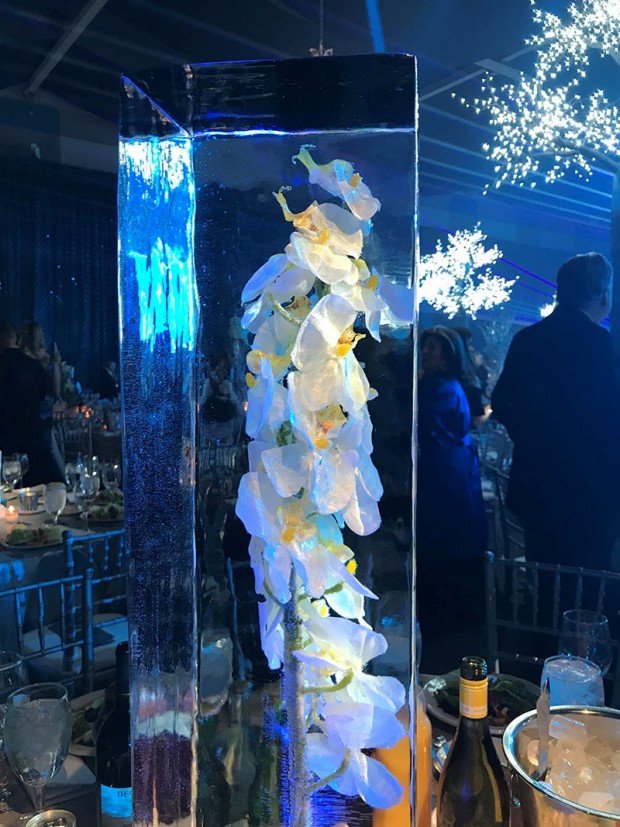 Beautiful centerpieces with flowers inside ice went with the theme of the evening. 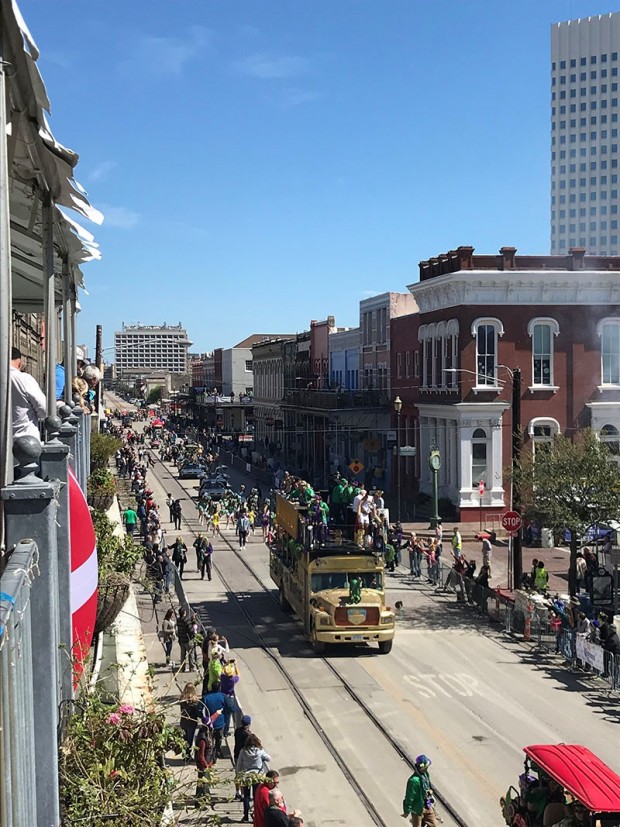 The daytime parade on Saturday. 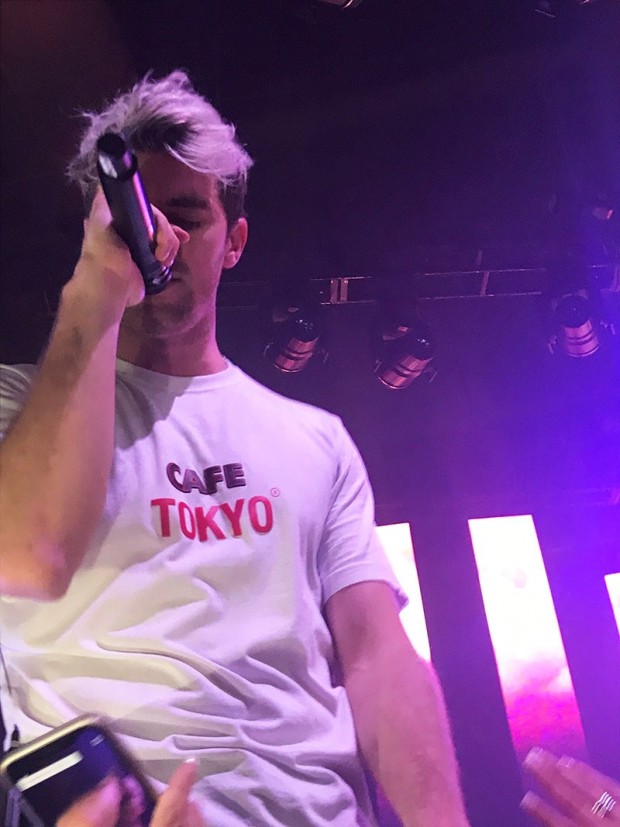 The lead singer of the Chainsmokers, pictured right before he grabbed Haley Kurisky's hand, much to her excitement. 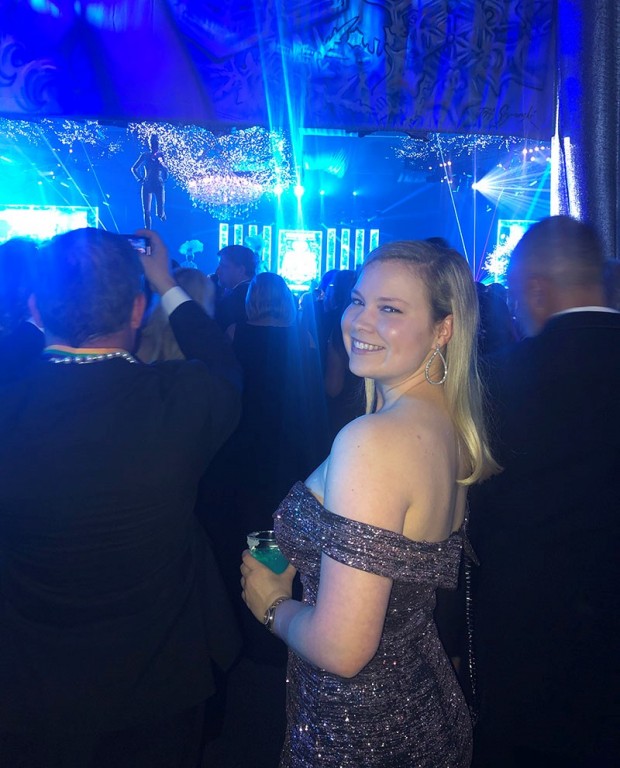 Writer Haley Kurisky - whose dress matched the theme of the party - entering the festivities. 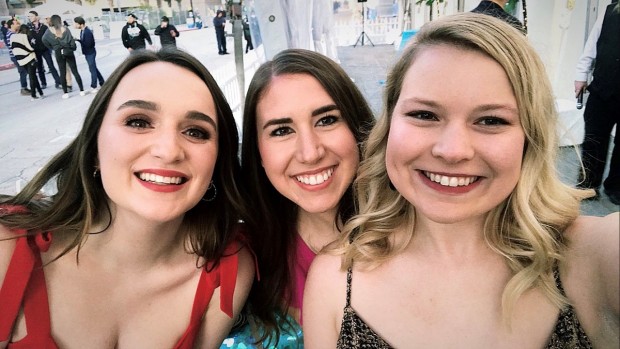 (From left) Sarah Kubena, Ellie Smith and Haley Kurisky at the Saturday parade day party at the Tremont House.