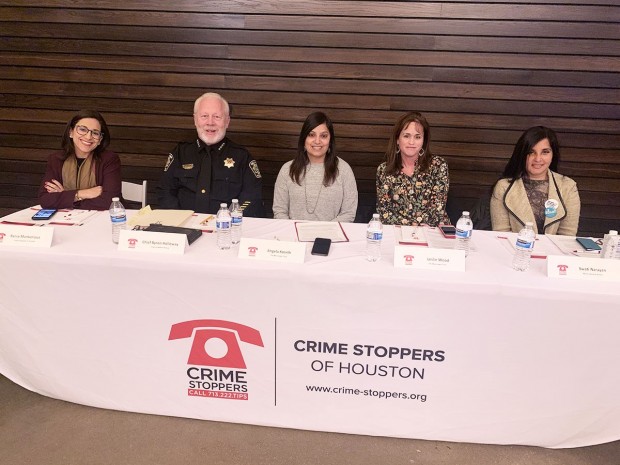 In light of rising crime rates across Houston, a powerhouse panel of public safety experts and mental health professionals gathered at Evelyn’s Park Conservancy on Wednesday evening for an open, community discussion titled “Stop the Madness.”

The event, organized by Crime Stoppers of Houston in partnership with The Buzz Magazines, addressed questions ranging from how to keep guns out of schools, to what the warning signs are for self-harm. The goal was to provide community members with useful and actionable steps to protect themselves from becoming victims and to respond appropriately to safety concerns. Public safety panelists were Chief of Bellaire Police Byron Holloway, Crime Stoppers of Houston CEO Rania Mankarious and volunteer leader with the Texas Chapter of Moms Demand Action Swati Narayan. Mental health experts on the panel were Angela Koreth and Leslie Wood from The Menninger Clinic. Moderating the panel was Sydney Zuiker, Safe Community Institute Manager at Crime Stoppers.

“We want everyone to feel empowered and to walk away with a nugget of information to help your family feel safe,” said Buzz editor Joni Hoffman, who opened the event. “We wanted to do this in an intimate session with comfort food – Whataburger – so we could just talk.”

Chief Holloway set the scene by outlining the rise in crime rates in Bellaire. Crime in Bellaire last year was up 22 percent over 2018, with the biggest increase being thefts and robberies. The impact of theft has increased, too, Chief Holloway said, since people nowadays carry around more valuables including expensive cell phones.

What is becoming especially common, and preventable, are “sliders,” which occur when a motorist gets out of a vehicle and leaves the door unlocked (for example, when pumping gas), allowing a criminal to slip in and steal a purse or other valuables. Also common are “juggings,” when an individual is targeted as he/she leaves a bank with cash. Many juggers conduct surveillance at the bank and are waiting for customers to leave a bank with cash.

The first step in preventing oneself from becoming a victim of such crime, said Rania, is to recognize that crime happens all over, regardless of zip code.

“It is critical that we become public safety minded and that you recognize that there is a chance – when you go out to get gas or go to the mall – that there will be people looking for an opportunity to harm you,” Rania said, emphasizing that being public safety minded does not mean being paranoid. “If you could be aware, then you may change your behaviors to protect yourself and mitigate crimes of opportunity. Don’t be the easy target.”

As each panelist responded to questions in their wheelhouse, a common theme emerged: the biggest action community members can take is simply to have open discussions about crime and safety. Whether it’s talking to their children about school shootings, having open dialogues about safe gun storage with friends or talking with family about how to ensure you are not the victims of crimes of opportunity, the panelists each emphasized speaking up.

With the recent school shooting at Bellaire High School top of mind, much of the discussion centered around school safety. One attendee asked what parents can do to help their kids after a shooting takes place in their school.

“It is a scary time, and the best suggestion is encouraging the parents to identify with the kid,” responded Leslie, social worker for The Menninger Clinic’s Adolescent Treatment Program. “Say, ‘it’s scary for us too, this is how we’re feeling about it,’ but help them realize that there are adults in place who are doing everything they can do to make the school safer.”

Angela, program manager for The Menninger Clinic’s Outpatient Services in Bellaire, added that parents should continuously check in on their kids and loved ones following an incident. While students might be most noticeably affected immediately following a shooting, it’s important to check in on them in the weeks and months following the incident as well. “It means asking open-ended questions like ‘how are you doing with that?’ and ‘how are your friends doing with that?” said Angela.

“If they aren’t sleeping, not doing well in school and they can’t focus [following a traumatic event], we really encourage parents to take control,” said Leslie, explaining that they might need to confiscate the child’s cell phone at night for the child’s mental health.

Swati added that prevention starts with safe gun storage, as more than 80 percent of kids who commit gun violence get the weapon from a parent or relative with a license. She described the Be SMART program, which provides a framework to help parents normalize conversations about gun safety.

“Rarely do we talk about guns and how they are stored. That is something we fundamentally have to change,” she said.

“We need people to be dialed into wanting to learn and share information,” added Rania. “That’s the biggest thing you can do.”

Editor’s Note: Sign up for our Morning Buzz e-newsletter to see the latest “buzz” and to learn about future community events.