Spring Break 2020 was anything but usual. In the days leading up to long-awaited vacations, excitement turned to worry as families began to wonder if leaving town was still a good idea in the midst of the global pandemic. Trips that had been in the works for months were put on hold, and many would-be travelers settled into the reality that they weren’t going anywhere.

With time to fill and restless kids to entertain, young Buzz families turned boredom into creativity and came up with Plan B. Some said they were pleasantly surprised to find plenty to do, even while practicing social distancing. Simple activities like talking with neighbors, taking driving day trips, or helping others suddenly became grand entertainment.

Julie Levine, owner of PicMontage, a video-montage company, and former camp director at the Evelyn Rubenstein Jewish Community Center, wasted no time finding an activity. With the help of her daughter, Riley, 14, Julie created an online scavenger hunt for friends and neighbors. “I wanted to give families a fun activity to do together. We had almost 70 families ask to participate, and I think it was a blast,” Julie said.

The scavenger-hunt items could all be found either inside people’s homes or in their yards. It was a creative list of random objects: a bobble head, a wristwatch with hands, a coin dated earlier than 1977, six different colored socks. Other goals required action: creating a pyramid with cups, drawing a family portrait. At the designated start time, everyone began furiously hunting down items and taking photos, trying to be the first to complete the list.

According to parents, Riley came up with the best item on the list: a fully made kids’ bed. “I have never heard my girls yell, ‘Quick, go make your bed!’” reported one parent. Another favorite of Julie’s was a photo of a boy nodding his head like a bobble head because the family didn’t have an actual bobble head. In the oldest-coin category, Deborah Rose Kopel’s family located one from 1890, and Hayden and Dylan Kramer discovered that their family collection contained some that are about 1,500 years old.

After just 21 minutes, the first completed set of photos arrived. Heather Lepow and her daughter, Samantha, documented each of the 24 items on the list and won first prize, a $25 Amazon gift card.

Memorial-area mom Lauren Reichenau’s family originally planned to spend Spring Break in San Diego, but as the warnings began, they canceled their flight and stayed home. Lauren brainstormed ideas about how to piece together a fun Spring Break. “I knew I wanted to do something outside to burn our energy.”

Lauren, with children Austin, Landry and Rylan and boyfriend Stephan Guidry, headed downtown to the Allen Parkway trail for some in-town sightseeing. Lauren’s friend, Staci Johnson, joined them with her kids Ally, Connor and Parker, and they rode bikes along the paved trails, taking in surprisingly beautiful views of downtown and the bayou. The kids took a break to watch the skateboarders at the Lee and Joe Jamail Skatepark at Eleanor Tinsley Park, and then wrapped up the day with a game of football.

The two families also drove to Huntsville State Park, about an hour outside Houston. They biked six miles on a trail through the pine trees that took them around Lake Raven. After finishing the challenging ride, the kids cooled off in the lake and had a Reichenau vs. Johnson wiffle ball competition before heading home.

For some families, Spring Break fun didn’t require leaving home. After a few days, Frostwood Elementary fourth grader Tucker Alberger was bored, and his mom, Anita, was running out of ways to fill the empty time. She thought about things they could do together to help ease the boredom, that were also teachable moments, and came up with the perfect art project.

Anita called the Vosswood Nursing Center to ask if Tucker could make cards for the elderly residents, and the response was an enthusiastic yes. He got out construction paper, markers and scissors, and made a card that said “Having a gloomy day? Here’s something to cheer you up.” He spent the afternoon making even more cards, and Anita dropped them in the mail. “I hope sending the cards will make the Vosswood grandmas and grandpas a little less lonely,” Tucker said.

It wasn’t the Spring Break anyone expected – and it ended up lasting a whole lot longer than a week – but it turns out that even quarantines can have silver linings. 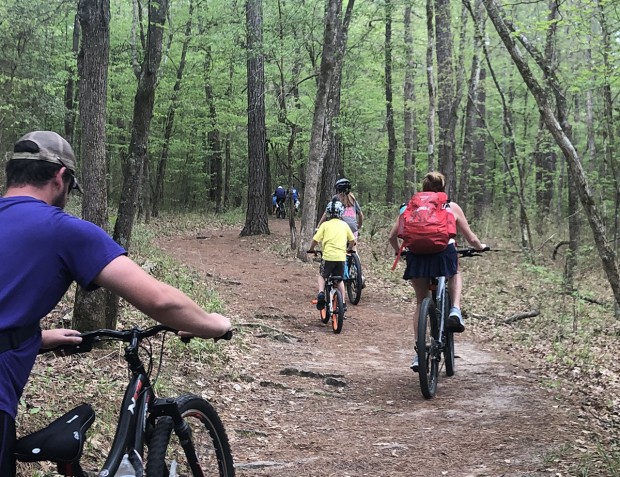 ON THE TRAIL The wooded trails at Huntsville State Park are the perfect way to explore on bikes. 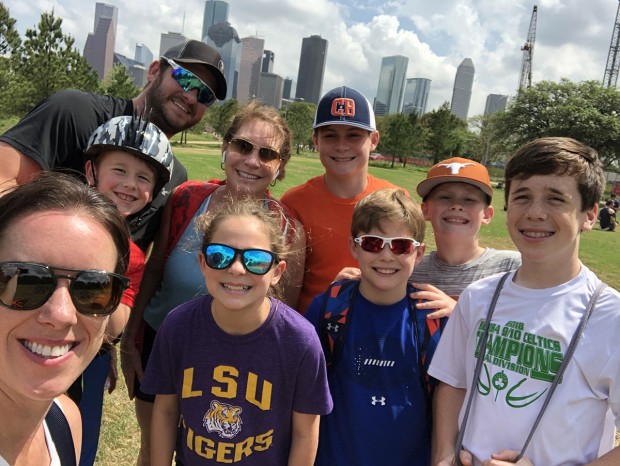 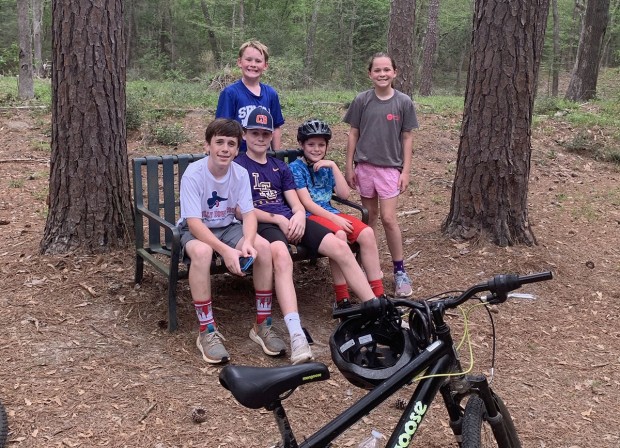 QUALITY TIME The Reichenau and Johnson kids take a break from biking at Huntsville State Park. Next stop: Lake Raven, to cool off from the Spring Break heat. 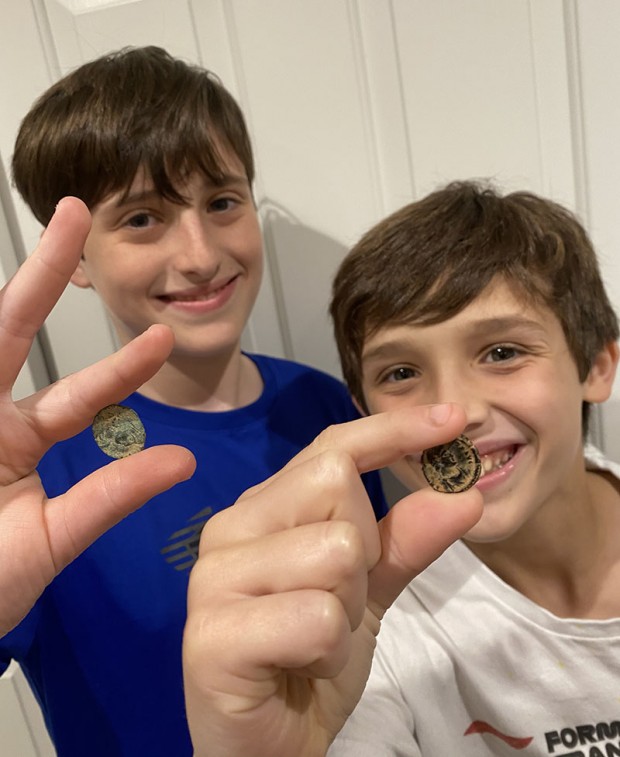 TREASURE HUNT Hayden and Dylan Kramer (from left) raided the family coin collection to search for old coins for their Spring Break scavenger hunt. The 1,500-year-old coins earned them valuable points in the contest. 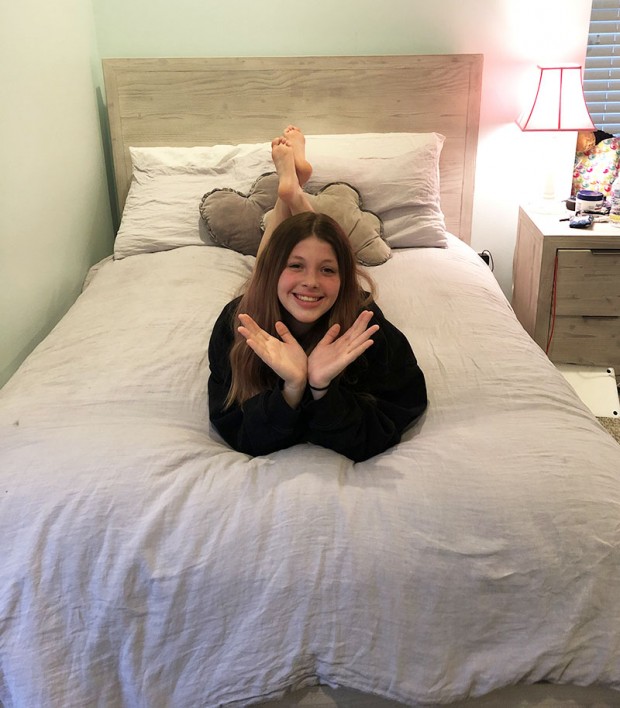 BEST MADE BED Riley Levine (pictured) won the award for documenting the “best made bed” in the photo scavenger hunt. She helped her mom Julie organize the event that provided Spring Break fun for 70 families.