5 Historical Fiction Titles that Everyone Should Read 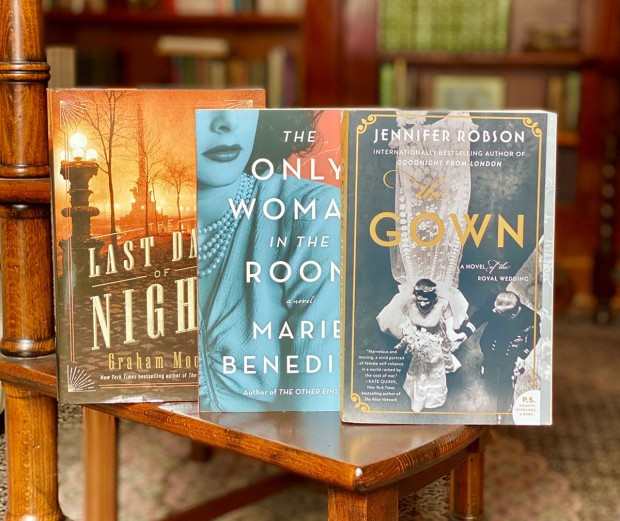 Historical fiction appeals to me due to its ability to transport me to another time and place while often highlighting a little-known or underreported event in history. The genre has exploded in recent years, and it can be hard to decide which titles are worth reading. I picked five of my favorites to feature this week – I consistently recommend these books to people who are wanting to become completely engrossed in a compelling tale.

As Bright as Heaven by Susan Meissner - As Bright as Heaven tackles the Spanish Flu epidemic that struck the United States in 1918-1919. Set in Philadelphia, Meissner’s tale is fascinating and heartbreaking, and her characters are well-developed, authentic and believable. Using the four Bright females as narrators, she unfurls their various stories slowly as the pages fly by. Each female character has a distinct personality, and Meissner deftly chooses the perfect individual to reveal a particular secret or fact. In her Author’s Note, Meissner states that the Spanish Flu pandemic of 1918-1919 was the deadliest disease in history, significantly worse than the Black Plague, and she chose it because it was an untold story. This book is a particularly timely read in light of the current spread of coronavirus.

The Gown by Jennifer Robson - While The Gown is a heartfelt tale about the creation of Princess Elizabeth’s wedding gown, it is also ultimately the story of three women who strive to find their place in the world and how each deals with love, loss and family. The book is told in a dual timeline format with Miriam’s and Ann’s stories taking place in 1947 and Heather’s in 2016. In the midst of the harshest winter in memory and shortages still resulting from the war, England welcomes the engagement of Princess Elizabeth to Lieutenant Philip Mountbatten. Norman Hartnell is chosen to design her gown, and Miriam and Ann are chosen to help embroider the creation. Years later following her grandmother’s death, Heather uncovers a box with her name on containing some delicately embroidered flowers. Robson exhaustively researched the time period resulting in a descriptive and satisfying tale of courage and triumph in the face of horrible shortages and grim weather conditions. I was surprised to learn that the end of the war was not the end of wartime rationing in London and how harsh living conditions were for London residents long after the war had ended. The Gown is a beautiful tale which touches briefly on Princess Elizabeth and her family but mainly details the creation of the wedding gown and the despondency of London following the end of WWII.

Last Days of Night by Graham Moore - As the book opens, George Westinghouse and Thomas Edison are in the midst of a massive battle over who owns the lightbulb and therefore will have the ability to electrify the United States. Both men are fighting for the right to have their name linked to this great invention and the chance to amass a great fortune as a result. Westinghouse hires a young attorney named Paul Cravath to represent him in the numerous (over 300) lawsuits brought by Edison related to the ownership of who owns the lightbulb. In addition, the Westinghouse and Edison are battling over which type of current, direct or alternating, will prevail. Moore incorporates so many fascinating facts related to the dispute and its effects on our world including that attorney Paul Cravath is responsible for the law firm hierarchy system that still exists today (created as he worked on the electrification dispute), all of the details relating to Nikola Tesla and his role in the electricity process and his other inventions, and the references to Henry Ford and the fact that he worked early on for both Edison and Westinghouse. Moore also manages to convey what the advent of electric light meant to society - factories and business are no longer bound by when the sun rises and sets, crime is diminished in public areas at night, and day and night no longer are no longer so distinct. Each chapter cleverly begins with a quote that is relevant to the subject of that chapter; Moore quotes Edison, Tesla, Alexander Graham Bell, Steve Jobs and even Neil deGrasse Tyson. This book is a page turner, and I still think about it regularly.

News of the World by Paulette Jiles - Set in Post-Civil-War-era Texas, Jiles tells the story of Captain Jefferson Kyle Kidd, an aging veteran of several wars who travels across Texas reading the news to various towns and communities. When the book opens, Captain Kidd is asked to transport 10-year-old Johanna, who was recently released from captivity by the Kiowa, to her relatives near San Antonio. The pair begins their journey up in Wichita Falls, Texas by the Red River and Indian Territory and makes their way south through areas fraught with danger due to the terrain, various warring Indian tribes and bands of raiders taking advantage of the lawless Reconstruction Era Texas. I was unfamiliar with the concept of a news reader who travels from town to town disseminating important stories from around the world and found myself fascinated by Kidd’s profession. One focus of the book is the difficulty Johanna experiences trying to assimilate back into her native-born culture, an issue many children captured by various Indian tribes experienced upon return to their families or towns. Jiles weaves this thread throughout the story and even includes an Author’s Note at the end with additional information on the topic. I loved this book so much when I read it and still regularly recommend it to people.

The Only Woman in the Room by Marie Benedict – The Only Woman in the Room chronicles the long and accomplished life of Hedy Lamarr (born Hedwig Keisler), the Hollywood screen star from the 1940s and 1950s. Escaping her Nazi-affiliated husband in the dead of night, she arrives in Hollywood where she launches the acting career for which she is well known. Unable to forget the horrors she witnessed in Austria, she recruits a partner (George Antheil), and they quietly begin work on an invention that she hopes will help the United States win the war against Germany. While the U.S. Navy did not adopt their invention until the 1960s, their work eventually led to the creation of Bluetooth and ultimately WiFi and the cell phone, and she and Antheil were inducted into the National Inventors Hall of Fame in 2014. While I was familiar with Hedy Lamarr’s acting career, I had no idea that she had also contributed to an invention that we all rely on daily.

I would love to hear about your favorite historical fiction titles! Please feel to comment and include them below.