Buzzy Beats: Music in the Time of Coronavirus 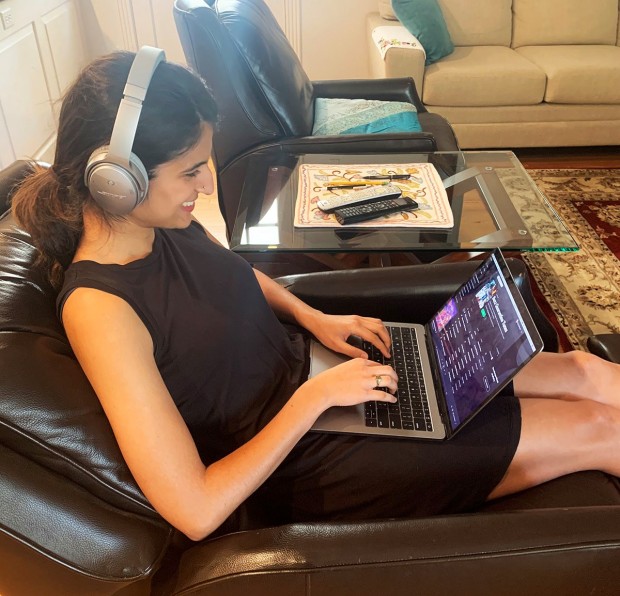 It’s a scientific fact that music has the power to improve mood. Research has found that listening to your favorite music releases dopamine – the “feel-good” neurotransmitter – into parts of the brain specifically associated with pleasure. Studies also demonstrate that music therapy can reduce symptoms of anxiety and depression.

In a time of a global pandemic, we could all use some extra good vibes and positivity. Each of us has different tastes in music, but whether you like Justin Bieber or The Beatles, there is something for each of us.

We put together a Buzz playlist with some of the songs we’ve been listening to over the past couple of weeks. Note: the playlist includes song selections from both men and women ranging in age from their 20s to 60s+, so you’ll likely find at least a couple songs you like! You can download our playlist on Spotify or see the list of songs below. 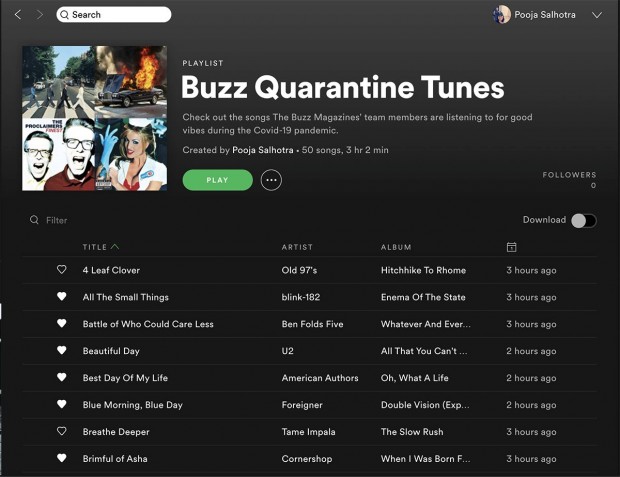 For a range of upbeat songs to listen while sheltering-in-place, check out the “Buzz Quarantine Tunes” playlist on Spotify.

Buzz Quarantine Tunes Playlist:
4 Leaf Clover by Old 97’s
All The Small Things by blink-182
Battle of Who Could Care Less by Ben Folds Five
Beautiful Day by U2
Best Day Of My Life by American Authors
Blue Morning, Blue Day by Foreigner
Breathe Deeper by Tame Impala
Brimful of Asha by Cornershop
Circles by Post Malone
Come Together by The Beatles
Dancing on Glass by St. Lucia
Days Like This by Van Morrison
Don’t Start Now by Dua Lipa
Everything is Possible Now by Clouds And Thorns
Feel It Still by Portugal. The Man
The Fighter by Keith Urban & Carrie Underwood
Happy by Pharrell Williams
Here Comes The Sun by The Beatles
Hey Ya! by OutKast
Highs & Lows by Emeli Sande
If I Go by Ella Eyre
I’m Gonna Be (500 Miles) by The Proclaimers
I’m Not Gonna Teach Your Boyfriend How to Dance by Black Kids
Intentions by Justin Bieber feat. Quavo
Island in The Sun by Weezer
It’s a Beautiful Day by Rob Drabkin
Knock You Down by Keri Hilson, Kanye West
Let It Whip by Dazz Band
Miracle by CHVRCHES
MMMBop by Hanson
My Church by Maren Morris
My Way by Mike Mains, Yacht Money
Never Comin Down by Keith Urban, Shy Carter
Never Seen the Rain by Tones And I
Nice To Meet Ya by Niall Horan
Not a Love Song by bulow
One Angry Dwarf and 200 Solemn Faces by Ben Folds Five
Peanut Butter Jelly by Galantis
The Power is On by The Go! Team
Praise You by Fatbow Slim
Probably Up by Lawrence
River Deep, Mountain High by Celine Dion
Route 66 by Chuck Berry
September by Earth, Wind & Fire
Smooth by Santana, feat. Rob Thomas
Some Nights by fun.
Summer Girls by LFO
Sunday Best by Surfaces
Superman by R.E.M.
Where Is My Mind? by Trampled by Turtles

As music festivals and concerts scheduled for spring are being cancelled, many artists are also turning to virtual shows. Global Citizen announced “Together at Home,” a free, virtual event series that has already featured performances by John Legend, Charlie Puth and Niall Horan. Other artists are streaming concerts using Instagram or Facebook Live. See here and here for a schedule of upcoming virtual shows you can tune in to.

Editor’s Note: This story was inspired by this “songs of summer” story in which our summer 2019 interns came up with a list of summertime favorites. Read the story here to get in a summer state of mind.