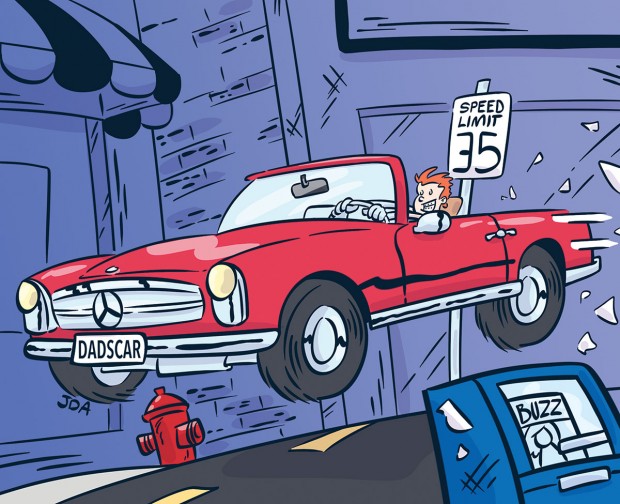 SEEMS LIKE YESTERDAY Many of us pulled some stunts as teenagers that live in our memories and make us shake our heads. (Illustration: behance.net/runamokstudios)

They’re the stuff of movies, those not-too-bright teenage shenanigans that we improbably got away with.

Think Matthew Broderick in Ferris Bueller’s Day Off and Tom Cruise in Risky Business, the kings of keeping things from their parents. Unlike Ferris and Joel, most of us didn’t get city-wide parades in our honors or host epic parties in our parents’ absence that lasted for days. But in our own ways, we’ve each been there.

Do you have a teenage memory or two waiting to be confessed after years of secrecy? These readers shared theirs (albeit anonymously), and they’re good for a laugh – and maybe a trip down memory lane.

“My older sister’s friend always parked her jalopy on the street in front of our house. My dad would fuss and tell her to pull into the driveway because he was afraid someone would hit [the car] on the street. One day, I was backing out of the driveway fast, and as I curved off the driveway onto the street, I rammed into that ugly car. The friend wasn’t there, so I ran inside to tell my sister. She talked me into keeping it a secret because she said we had warned the friend repeatedly not to park there. So I snuck my own car to the car dealer and got a new backlight and they banged out my back dent. My dad got home and went ballistic and called the neighborhood cops and told them some hoodlum had crashed the parked car! OMG we never told either the girlfriend or my dad. The friend is still my sister’s best friend, but we don’t think she would find the humor like we do.”

“In 1965, my parents were giving a cocktail party. When the liquor delivery truck came, nobody was home, so they put it in the garage. My friend Shorty and I backed his car into the garage and put it all in the trunk. Mother called the police, and Shorty and I simply stood there while Mother made the report.”

“My brother and I [he was 4 years older] didn’t get along very well growing up. But one thing that brought us together was throwing a party one summer at our parents’ house when our parents were out of town. He was home from college, and I was in high school. We moved furniture and rolled up rugs. Had the party, then put the house back together the next morning, when we weren’t feeling too good. It was a bonding experience.”

“When I was 13, I decided to sneak my dad’s car out and teach myself how to drive. It was a stick shift. Every time my parents went on a date night or to a party, I would take his car out for a spin. When he got a new Mercedes, I couldn’t resist that either. I would drive around Tyler in my dad’s convertible Mercedes picking up friends. I can’t believe I never got caught or that my dad wouldn’t notice gas draining quickly from his car on weekends or that my parents’ friends never saw me tooling around town! I did this from 13 to 15, until I got my hardship license and, needless to say, passed the test with flying colors.”

“My favorite story really doesn’t count because my parents did find out. We had a formal, and a bunch of girls had an after-party where we slept over in an extra condo one of our parents had. My mom came up to pick me up the next morning and saw one of the dates there, still in his tux. She thought we brought home a waiter!”

“When I was a senior in high school, my friends and I would drive around and change the lettering on signs, usually church signs because they were low to the ground and had lots of letters we could use. We would change the letters Saturday night just before Sunday services. Don’t you know the ministers just loved us?”

“As a grown-up, this sounds so awful I almost can’t say it out loud. We were probably 17 and driving around with nothing to do sometime before Christmas. I don’t know what possessed us, but we stole someone’s Christmas lights. Took them right off the trees. We thought it was hilarious, but, looking back, it really wasn’t!”

Editor’s note: To confess your own teenage mischief, comment under this story at or email [email protected].