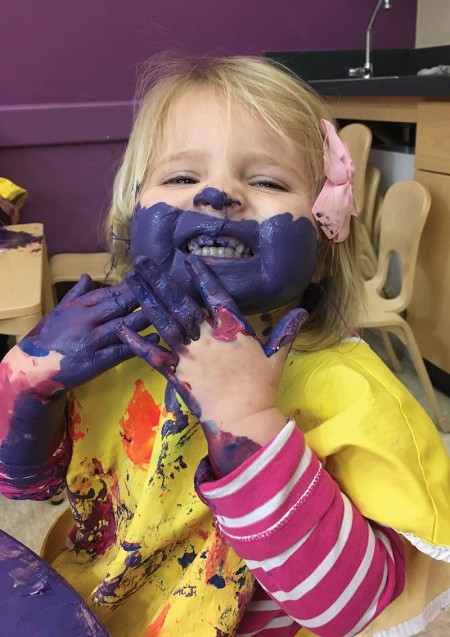 Toddlers make messes. Turn around for a few seconds, and they’ve spilled a huge bag of uncooked spaghetti all over the kitchen (true story), drawn colorful art murals on house walls, or, even better, tattooed their faces with a Sharpie marker (another true story).

When Ashley Hulsey was potty-training her then-2-year-old daughter, Anna Katherine, in 2016, she experienced a household chocolatey mess of all toddler messes. “It is the mess that she’ll never live down,” Ashley said, laughing.

The picture Ashley hurriedly snapped with her phone as the shock was sinking in was even featured on The Ellen DeGeneres Show’s segment “Why I Don’t Have Kids” and we featured the story in our May 2017 Mother’s Day issue (when Ashley’s advice from her own mother rang in her head – “don’t sweat the small stuff”).

The photo is, to this day, circulating the internet and is especially popular in parenting Facebook groups. “Someone is always tagging me or sending it to me,” said Ashley.

It started like a normal evening in the Hulsey household. Ashley was home, preparing dinner for her two kids, Anna Katherine, the tot, and older brother Alex, 4 at the time.

Ashley said everything seemed to be calm, under control. She started cooking while the kids were happy and playing quietly, keeping to themselves.

Since Anna Katherine was being potty trained, her reward for successfully using the toilet was chocolate milk – not the store-bought, premade kind, the old-school way, with a glob of dark chocolate syrup in a cup of milk. 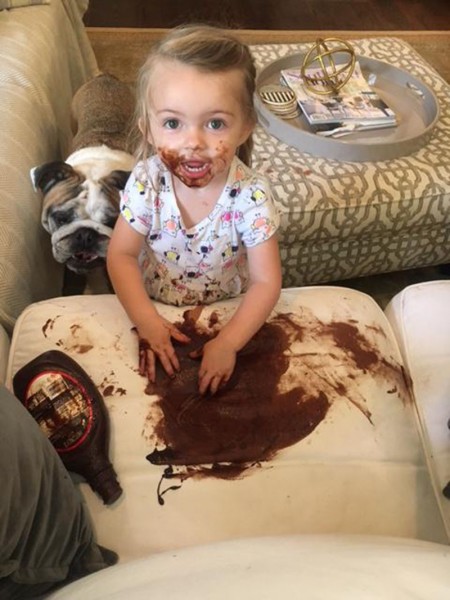 Ashley had just purchased a brand-new bottle of Hershey’s chocolate syrup. Anna Katherine used the potty, so naturally, Ashley upheld her end of the deal, concocted a cup of chocolate milk and proceeded to leave the bottle next to their (white) couch. She went back to the kitchen, not thinking anything of it. Anna Katherine was leaning on the couch.

“She was playing quietly, and I could see her little head in the living room from the kitchen and knew she was fine,” said Ashley.

Dinner was ready, so Ashley peeked over the couch where she discovered that almost the entire white couch had been covered with chocolate syrup. Anna Katherine was smearing it up and down and all around. Their English bulldog, Bob, sat and looked on at his human sibling. “She had been quiet as a mouse the whole time,” said Ashley.

Ashley eventually laughed it off, and believe it or not, the chocolate stain came out of the white couch. She received an insider tip from an employee of Hershey’s – soak the stain with Dawn dish soap. (Ashley then laundered it 3-4 times before it eventually came out.)

Artist and elementary school art teacher Maggi Dunwoody Cummings loves it when her two daughters Josie, 2, and Emeline, 1, get creative with paint. Maggi says when the girls paint at home, she usually leaves Josie in a pull-up diaper outside so she can make a mess without staining her clothes or messing up the house. 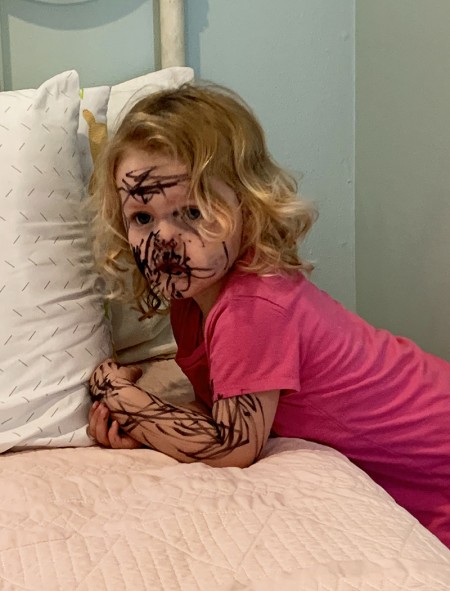 FACE IT Georgia McQueen, 3, took a Sharpie marker to her face and arms the day before her third birthday

Recently, while Josie was at preschool, she and her classmates learned about mixing paint colors. The tots were playing with red, blue and white – they mixed them together to make a deep purple concoction. Josie started to paint her face, and she kept going until her entire face was covered in dark purple paint, her little eyes peering out.

“Her teacher texted me the picture, and I could not stop laughing,” said Maggi. “I thought it was hilarious, and was so Josie. She is a very silly girl, so full of life, so sweet and loves to laugh and make others laugh.”

Maggi said some of the other kids were doing it, too. “I guess that once a couple of them started putting it on their faces, they didn’t want to stop the fun. The kids were laughing and being supervised, definitely contained. They just let the fun keep going, which I appreciate for my 2 year old.”

As I know all too well, toddler messes can be stressful, but it’s important to remember to take some deep breaths when they inevitably happen.

It also helps to have the right cleaning supplies on hand: Mr. Clean Magic Erasers (for drawn-on walls, countertops or floors), OxiClean and Carbona stain removers (for laundry stains) and good old-fashioned baby oil (for permanent markers or paint on skin).