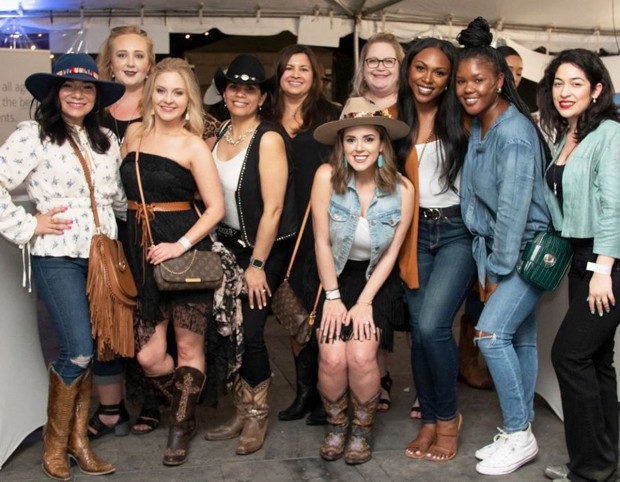 Rodeo patron Nicole Lopez-Cummins worked with Cara Adams to create the 2020 Rodeo Houston Vendors Facebook page. Here, Nicole is pictured at this year’s rodeo along with her colleagues.

Cara Adams and Nicole Lopez-Cummins haven’t seen each other since they graduated from Kingwood High School together in 2004. But a shared passion for helping others brought the two Houston-area mothers together.

After hearing that the Houston Livestock Show and Rodeo would cancel due to coronavirus concerns, Cara and Nicole both felt devastated for the rodeo vendors, many of whom count on sales from the 20-day event to earn a living.

“Some of these vendors work all year to come and sell at the Houston rodeo,” said Cara, 34. “This is their source of income. I was hoping to find a way to help them.”

Cara was trying to think of a way to support the vendors when she came across a Facebook post from her old friend Nicole, a mom of three who lives in the Heights and works as a realtor. Nicole’s post encouraged Houstonians to support rodeo vendors by shopping for their products online.

Upon seeing the post last week, Cara immediately messaged Nicole, suggesting they create a Facebook group together that would connect rodeo vendors with buyers. Cara had previously helped create a Facebook group called Hurricane Moms Memorial to support those impacted by Hurricane Harvey, and she hoped she could use Facebook to similarly help the rodeo vendors impacted by rodeo being cut short. 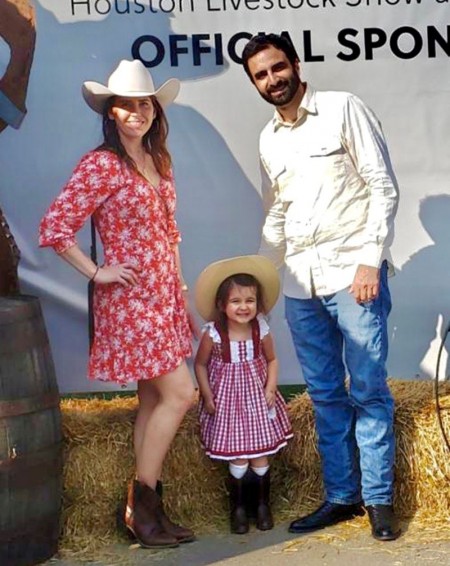 Cara Adams, who used to show her goats at the rodeo while growing up in Houston, helped create a Facebook page to connect rodeo vendors with buyers. Here, she’s pictured at the rodeo with her daughter Victoria Shaar and husband Shad Shaar.

“We were definitely not prepared for the number of people who wanted to shop the rodeo,” said Nicole. “But that’s just indicative of the spirit of Houston. Whenever somebody in Houston is hurting, we always kind of rally around to make sure they are taken care of.”

Initially, requests to join the group were coming in so quickly that Cara and Nicole were having a hard time responding to all the requests in a timely fashion. They therefore recruited three of their friends, America Gussett, Matthew Marchetti and Lindsey De La Rosa, to serve as page administrators. Still, they were working around the clock.

“I was up at 3 in the morning approving posts and approving people coming in,” Nicole said on Friday afternoon. She explained that the group is closed – meaning both members and posts must be approved by an administrator – in order to preserve the space for rodeo vendors.

When the page was public for the first few hours, vendors unaffiliated with the rodeo started posting their own products for sale, Nicole said.

Nicole and Cara have also listed a set of rules to protect the integrity of the page. For instance, buyers are told that once they claim an item, they cannot back out of the purchase, for that would be unfair to the vendors. “Backing out of a sale is not allowed and will be grounds for removal,” the rule states. Another rule tells people to be kind. “If you are not being kind, you will be removed without question.”

Initially, Nicole and Cara only planned to run the Facebook group until the end of rodeo season, but positive response may influence them to continue operating it for longer.