SAT Canceled in Light of Coronavirus, Impact on SJS Students 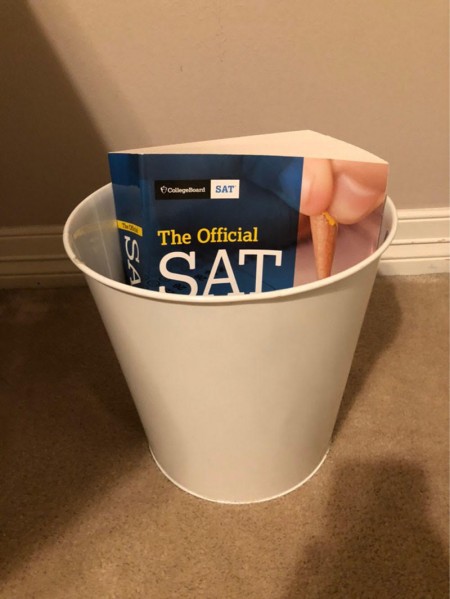 As an avid member of his Boy Scout troop and soon-to-be Eagle Scout, junior David Hindman rarely misses a campout. However, in the week leading up to his first SAT, Hindman decided to forgo camping to fit in one more practice test. He also decided to sacrifice paper writing time during the week for last-minute test prep before the March 14 administration. However, Hindman, along with several other juniors, were never able to take the test after receiving an email from College Board the night before informing them that their test had been cancelled due to growing fears of the Coronavirus (COVID-19) pandemic.

“I wish I had that time back so I could’ve worked on my English paper instead of preparing for a test that I’m not going to be able to take until several months from now,” Hindman said.

A few days after sending the first email, College Board announced that they were cancelling the May SAT and the March makeup administration, scheduled for March 28. These cancellations have presented a unique set of challenges for juniors across the country. Having registered for two SAT subject tests in June, the earliest Hindman can take his first SAT will be at the start of his senior year.

“I honestly didn’t think that waiting till March of junior year was waiting till the last minute,” said Hindman.

Hindman, who had planned to complete his Eagle Scout project and brainstorm ideas for a new club over the summer, says that he will lose much of that time in additional preparation for the test at the start of the next school year.

For many juniors, the March SAT represented the culmination of months of preparation for the test, including an eight session partnership course with Advantage Testing which ended the Saturday before the exam.

“I felt incredibly prepared for [the SAT] this time, and it would have been nice to knock it out knowing I’ve done my best,” said junior Nicholas Sorak.

The April ACT test has also been cancelled and all previously scheduled students will be moved to the June 13 administration.

While most institutions have not yet announced changes to their testing policies for the Class of 2021, Case Western Reserve University announced last week that they will allow all rising seniors to submit an application without SAT or ACT scores.

In addition to admissions tests being cancelled, the Advanced Placement (AP) program unveiled significant alterations to this year’s exams on March 20. Unlike previous years’ exams that contained several sections including multiple choice, long and short answer questions, and listening and speaking portions, all 2020 exams will be forty-five minute, free-response exams. Students will be able to choose from two national test dates and can complete the exams from the comfort of their homes on any device.

Though the COVID-19 pandemic has upended standardized testing, its effects have impacted other aspects of the college admissions process as well. Most colleges have cancelled all campus tours and information sessions for the foreseeable future, leaving students to rely only on online resources when researching colleges. For juniors like Hindman, who was planning on visiting several schools over spring break, virtual tours are the only alternative.

“If I am doing a virtual campus tour online, sure every school is going to have lawns and trees but it's different when you are actually able to be there and appreciate the size,” Hindman said. “It is the excitement you feel when you are on campus that you don’t feel when you are at home.”