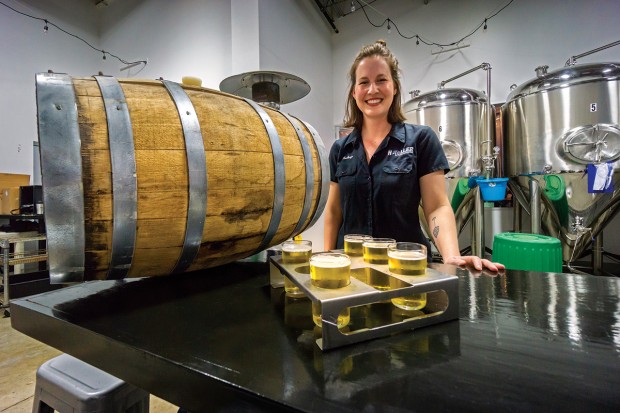 After visiting more than a dozen breweries in the Houston area, we realized that this is a family affair. When you see parents with toddlers in tow, you know breweries are mainstream and no longer a trend.

“When you’re in Germany, and you go to a beer garden, you’ll see everybody from 2 year olds to 90-year-old matriarchs. It’s very much the scene with food and beer. We’re seeing that as well here,” says Brock Wagner, who co-founded Saint Arnold Brewing Company in 1994.

The Rice University grad refers to the mid-’90s as the first renaissance, when about a dozen or so craft breweries opened after Texas legalized them. “Every single one of them closed. Now we’re referred to as Texas’ oldest craft brewery. We weren’t the first, but we outlasted them all,” Wagner says. “Now we’re in the middle of a second renaissance.”

Houston is awash in IPAs, ushering in a second era of thriving breweries and beer bars. They dot the city, with taprooms selling beer to go, as well as giving fans direct access to limited batches of ales and IPAs. Today, more than 55 breweries and brewpubs are licensed by the Texas Alcoholic Beverage Commission between Galveston Island and Bryan-College Station. So, how many are there in the entire state of Texas? Nearly 300.

The surge started in 2013 when a law was passed that allowed breweries to sell beer on site and brewpubs to distribute to retailers. The 2013 law was a game-changer, but last year, the “beer to go” law went a step further, allowing patrons to take home craft beers in sealed containers, says 8th Wonder Brewery manager Joc Mathis.

What started as a hobby for standup comedian Brian Kondrach morphed into a full-time gig.   “We’ve been biking from brewery to brewery for pure enjoyment for about six years. There were very few breweries when we started, but that number increased to eight and then 12.” Two years ago, Kondrach and buddy Jason Buhlman launched Tour de Brewery, which hosts bike tours of breweries.

It’s boom times for beer fans, but with so many choices, it’s also easy to get lost in this sea of suds. Below, Kondrach, Mathis, and other hopheads map their own self-guided beer crawls around town, by car or bike. 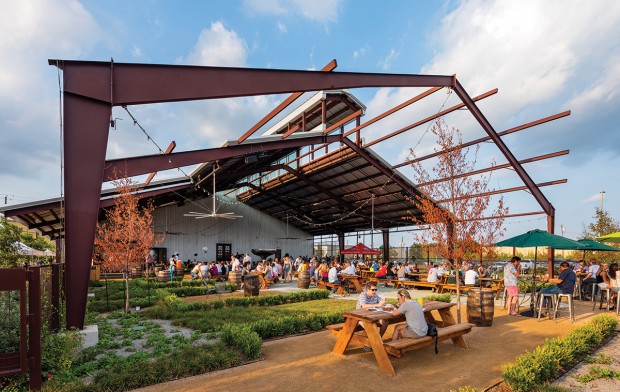 Head northeast of downtown, toward the Fifth Ward, once dubbed “The Harlem of the South,” to start your tour at the grande dame of microbreweries, Saint Arnold Brewing Company (2000 Lyons Ave., 713-686-9494; saintarnold.com). Year-round and seasonal brews are served in the two-year-old Beer Garden & Restaurant, along with a few single-batch brews. New to the lineup are Bishop’s Barrel No. 25, a Baltic porter aged in port barrels, and Chocolate Milk Stout, made with James Beard Award-winning chef Hugo Ortega’s chocolate tablets produced in Oaxaca, Mexico.

Less than a five-minute drive away is the new kid, Local Group Brewing (1504 Chapman St., 713-899-8266; localgroupbrewing.com), which labels itself “a restaurant that brews its own beer” and backs it up by hiring former Post Oak Hotel executive chef Jeff Samoska to oversee its American comfort food menu.

Early in the day, especially on sunny weekends, the delighted squeal of children echoes through “Wonderworld,” the beer garden at 8th Wonder Brewery (2202 Dallas St., 713-581-2337; 8thwonder.com). No wonder – just outside the taproom are two pétanque courts (similar to bocce ball), cornhole, frisbee golf, and plenty of room for other outdoor activities. Oh, and there is the famous Eatsie Boys food truck.

Nearby is Sigma Brewery (3118 Harrisburg Blvd., 346-352-3190; sigmabrewingcompany.com), a no-frills taproom favored by many beer aficionados. It also doesn’t hurt that the Doomsday Wrestling comedic troupe trains there on Thursday and Sunday evenings, around 7 p.m., in the weeks leading up to their shows.

Less than a 10-minute stroll away lies Holler Brewing Co. (2206 Edwards St., 832-781-0555; hollerbeer.com), where John and Kathryn Holler brew a rotation of beers sold exclusively in their tap room and at select bars.

Walking Stick Brewing Co. (956 Judiway St., 713-300-1866; walkingstickbrewing.com) is on a leafy block surrounded by trees in Garden Oaks. Owner Andy Dunn lived in the United Kingdom and fell in love with traditional British ales. You’ll find those, along with various IPAs, plus a rotation of food trucks parked outside.

Eureka Heights Brew Co. (941 W. 18th St., 832-953-4677; eurekaheights.com) put itself on the map after capturing a gold medal at the Greater American Beer Festival in 2017 for its cream ale, Buckle Bunny. Beers are available by the pint or in a flight. As for grub, a lineup of food trucks services the brewery.

Baileson Brewing Co. (2322 Bissonnet St., 832-516-9828; bailesonbrewing.com) is an easygoing 1,600-square-foot space that formerly was an auto service center in Boulevard Oaks on the edge of Rice Village. Co-owners Adam Cryer and wife Sarah Pope focus on hand-crafted ales and currently serve 10 on tap.

Under the Radar Brewery (1506 Truxillo St., 281- 974-1473; undertheradarbrewery.com) offers all-day $4 pints on Mondays and Wednesdays. The taproom typically features five signature beers that are distributed to bars and restaurants in addition to special one-batch-only releases available only at Under the Radar.

The Phoenix on Westheimer (1915 Westheimer, 713-526-3100; phoenixow.com) is described by beer enthusiasts as a true British brewpub that serves standards like Sierra Nevada Hazy Little Thing and Stella Artois Lager, along with its own brews, including Red Irish Ale, Eat Your Wheaties and Dirty Blond. There is a full-service kitchen with an eclectic menu that includes fish and chips, chicken piccata, and even a plant-based burger.

There are no entrance fees to visit and tour the breweries. However, visithoustontexas.com offers brew passes. For example, a one-day pass allows you to sample various brews from four participating breweries for $28.95, or take your time and sample the offerings at 12 breweries with a 90-day pass for $74.95. A three-day pass is available for $39.95 and lets you explore the various offerings from 12 breweries across Greater Houston. Visithoustontexas.com is part of the Houston First Corporation (HFC), the official destination-marketing organization for the City of Houston.

Tour de Brewery offers tours Wednesdays through Mondays. Prices range from $69 to $89 and include beer, bike, and helmet. For more information, call 346-268-7610 or visit tourdebreweryhouston.com.