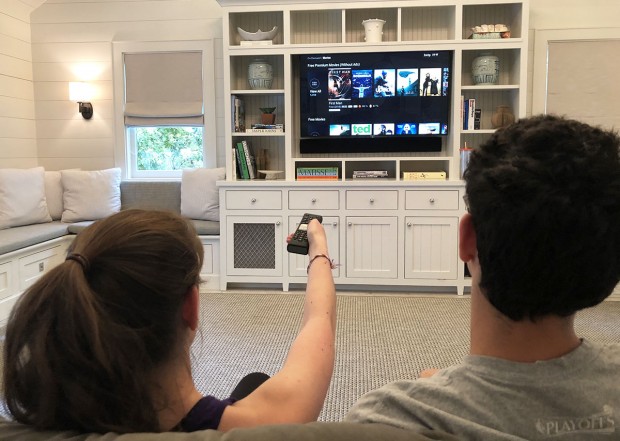 St. John's junior Bailey Maierson and her brother Eli Maierson ('19) choose a movie to watch. When Eli was a student at St. John's, he wrote a movie column for The Review called CineMaierson. Here, Bailey follows in his footsteps and chronicles movies they've watched recently.

My family comprises some of the biggest movie-fanatics that I know, and I have recently joined that cult. I’ve come a long way since my family showed me Gremlins (1984) when I was around eight years old, and I ran to my room halfway through in utter terror. My brother teases me about that to this day, but since then, I have learned to appreciate films, as well as filmmakers, and the stories behind making them.

My mom loves watching rom-coms with me but will also go for drama and horror films; my dad loves anything action, or western, but has a soft spot for tearjerkers; and my brother will watch basically anything.

With four Snuggies and more popcorn than you could imagine, we began our “staycation” movie binge.

Within the first few minutes, I was immediately transported into Mumbai. The aerial shots of the Dharavi slum, curated by cinematographer Anthony Dod Mantle, were some of the most visually stunning scenes in the movie. Director Danny Boyle creates seamless transitions between present-day Jamal, a contestant on the Indian version of  “Who Wants to Be a Millionaire?” and young Jamal, facing continuous struggles.

The music, the glimpse into life in Mumbai and the cinematography were what made this film truly captivating and why you should check it out.

Best Original Screenplay 2002: Eternal Sunshine of the Spotless Mind (aka Best Puzzler or Film to Think About While Stuck in House)

I have seen lots of Jim Carrey movies in my time, but this was by far the strangest and least amusing one for me.

Because my brother had been eager to see this movie for a while, I agreed to watch it. I definitely had nothing better to do and family movie night was no longer optional; it was as if I had signed an imaginary binding contract by this point in our self-quarantine.

Director Michel Gondry intertwines the past and the present of a romance that goes awry. The sci-fi twist keeps you on their toes and gets confusing, so pay attention.

While this wasn’t my favorite movie, I saw it as a sort of challenge: I would definitely have to watch the film a second time to completely understand the madness yet brilliance of screenwriter Charlie Kaufman’s screenplay.

My mom and I decided to start a movie after lunch? After Night 2’s somber pick, we were looking for something more upbeat. While it was technically my turn to choose, she suggested Tootsie (1982).

From the start, Dustin Hoffman’s (Micheal Dorsey) portrayal of a failed actor was hilarious. A montage of his character’s auditions illustrates his stubbornness. When every playwright in New York refuses to work with him, Dorsey adopts a creative solution.

A sort of precursor to a personal favorite, Mrs. Doubtfire (1993), this film was nothing short of hysterical. What is more, the movie was surprisingly relevant to issues of female empowerment. If you’re feeling stressed or worried about what is going on in the world, this movie will definitely alleviate some of those sentiments.

Two movies in one day? I know that you’re thinking my family is nuts, but honestly, I think it was a wise decision.

Hell or High Water (2016) is a cowboy heist film which translates into lots of guns, bank robbers and, in this case, a location in West Texas. The story is centered around brothers Chris Pine (Toby) and Ben Foster (Tanner) who rob banks in order to pay off the mortgage on their family ranch.

As they drive along the barren landscape of West Texas, the billboards indicating “quick loans and fast cash” immediately transport us into a period of desperation for these folk.

I don’t usually love action movies, let alone western ones, but this is a film I highly recommend. It didn’t feel like a typical western movie because of its blend of both comedy and heist. The unique combination resulted in a short film that had something for the whole family. For me, the wry humor of Marcus Hamilton (Jeff Bridges), and the fact that I’m a huge Chris Pine fan that drew me in… *sigh*

Of course my mother picked a classic 1980s tearjerker.

The film conveys the somewhat amusing, somewhat heart-wrenching bond between a widowed mother, Aurora Greenway (Shirley MacLaine) and her daughter Emma Greenway (Debra Winger). The movie flips back and forth between the daughter’s struggles to build her own family, and her mother, who helicopters over her daughter and searches for love. Garrett Breedlove (Jack Nicholson) provides some comic relief as the egotistical neighbor.

As you watch, you’ll find yourself tangled in the lives of these two women as they navigate the daily rigors of life. The personal connection to the characters made the end of the movie all the more upsetting.

I won’t spoil anything if there are any members of Generation Z that have yet to see this movie, but let’s just say you’ll need a box of tissues nearby for the last 30 minutes.

*As a side note, much of the movie takes place in Houston with numerous scenes of River Oaks, Brennan’s and so on, so be on the lookout for hometown hotspots!

Since then, the Maiersons have also watched:

Editor's Note: A version of this story was originally published on The Review, St. John's School's newspaper, here. Also, see more on movies filmed in Houston - including Terms of Endearment - as well as Rushmore, part of which was filmed at St. John's, here.