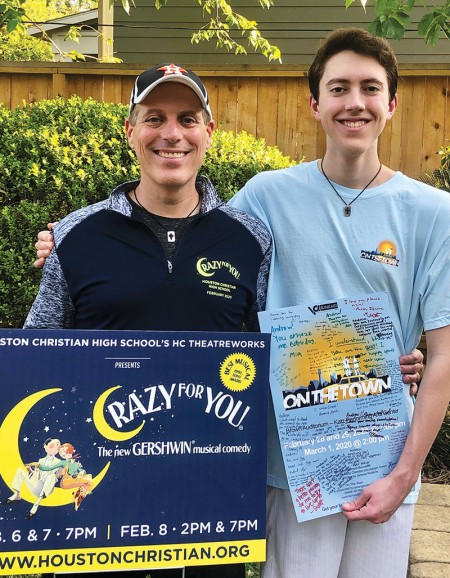 Bobby Linhart, Director of Houston Christian High School theater department and his son, Andrew Linhart, a senior at Kinkaid school, are both nominated for a TUTS Tommy Tune award this year! What a year 2020 is for the Linhart family!

This talented father-son duo both have grown up in the Memorial/Spring Branch area. They have not only been involved in theater, but also played SBMSA. It is a dream that they get to experience the 2020 Tommy Tunes Awards together!

Bobby Linhart is celebrating his 6th Tommy Tune nomination for Best Director this year! This year he directed the crowd-pleasing production of "Crazy For You" for Houston Christian. He’s been teaching music and drama 27 years and in his 8th year at HCHS. HCHS received 11 Tommy Tune nominations for “Crazy for You” including Best Director and Best Musical. Bobby grew up in Spring Branch where he went to Spring Woods High School. He later earned a Bachelor of Arts in Music and Theatre from Southwestern University and Masters in Music Literature for University of Houston Moores School of Music. He performed with Galveston Outdoor Musicals and TUTS.

His family including Stephanie Linhart, his wife, have a long history of musical theater together. He met Stephanie in 1994 while they were both performing in "Jesus Christ Superstar" at The Country Playhouse, now the Queensbury Theater. Bobby played the role of Jesus and Stephanie was a dancer in the show. Bobby has directed Andrew in several productions including Andrew’s recent role as the Pharaoh in the musical "Joseph and the Amazing Technicolor Dreamcoat." All three Linharts are active in music and theatre at their church (Terrace United Methodist Church) and Terrace Theatreworks, a community theatre program at Terrace UMC. They sing in the choir and produce and perform in musicals. What a talented family!

Andrew is a senior at Kinkaid and played the role of Judge Pitkin and is nominated as Best Supporting actor in "On the Town." He played varsity volleyball 4 years, served as Honor Council President, Club President, Peer Mentor, was in upper school musical all four years, and Select Choir four years, including All-State Choir. Andrew was also inspired by his father who was in an a capella group in high school and he decided to start his own, the Kinkaid Falchords. He will be attending Rice University in the fall majoring in Mechanical Engineering.