Name That Tune: The Stories Behind the Videos

Recently, The Buzz began a video series called “Name That Tune” on our Facebook page, in which talented residents submit videos of themselves playing snippets of a song on an instrument and viewers comment to guess the name of the song.

We’ve found these videos to be a fun respite from the onslaught of coronavirus updates. We hope you’ve enjoyed hearing from our local musicians, too!

We sat down (actually, we talked on the phone because, well, social distancing) with our recent Name That Tune contributors to get to know who they are and why they play music. Read on for excerpts from these interviews: 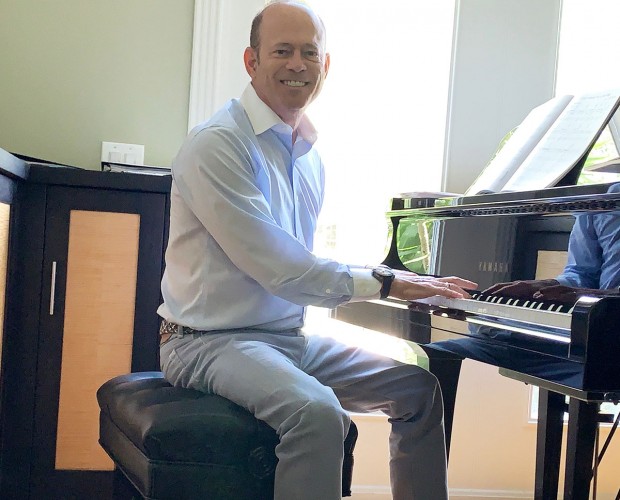 Larry Ginsberg, who has played piano since he was seven years old, kicked off our Name That Series series.

How did you get into piano playing?
When I was young, say 5 or 6, we visited some cousins, and they had a piano. My mother must have seen me take an interest in it, so she said, “I’m going to get him into piano.” I started lessons when I was 7. On my 30th birthday, my mom wrote this poem where she wrote, “A chance to develop his special skill, this is where he would be king of the hill,” referring to the piano. She and my father died in a car accident two months later. It was as if she envisioned the piano as something that would be a feather in my cap. And that proved correct.

So all these years later you’re still playing. But when you were young, did you enjoy taking piano lessons? Or did you feel forced into playing?
I wasn’t pushed into it, but I was a poor student. My teacher would assign me classical songs, and I was bad. I was uninspired. My teacher finally realized that maybe pop music would inspire me, so he’d give me these classical songs plus Beatles or Monkees songs. When I’d come back, I couldn’t play the classical music, but I could play the pop music.

Did you continue taking lessons?
I stopped lessons when I was 15, and I haven’t taken a lesson since. I just got enough knowledge of reading music that, if a song isn’t terribly technically challenging, I can read the music. I can’t sit down and play Rachmaninoff, but I can sit down and play Billy Joel and sing along. Not sing along great but sing along.

How often do you play now?
I play every day. Often, I’ll just play a song or two. Sometimes, I’ll pull out a book and play a song I haven’t played in a long time.

Tell me about how you picked the song you played for Name That Tune? [Billy Joel’s Miami 2017]
On Facebook, a friend posted a video of Billy Joel playing that. It was just emerging at the time that New York City was the epicenter of the coronavirus pandemic in America. The song talks about a devastated post-apocalyptic NYC [after 9/11], so the song was already on my mind. And it’s a song I know by heart.

How do you think your mom knew that piano would become so important for you?
I think that every parent probably looks for something that they think will inspire their kid. It could be dance or sports. Why does any parent give their kid any opportunity? They want their kid to have a lifelong passion. There’s no telling where it leads. For me, it didn’t lead me to Juilliard and a career in music, but it’s nice to have a hobby. 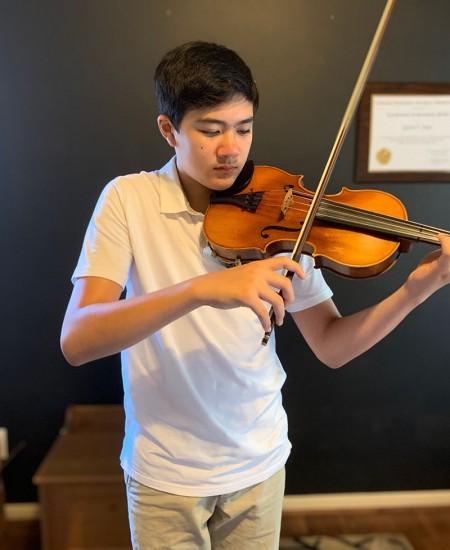 Can you explain the difference between the violin and the viola?
The viola has the cello strings and is a little bit bigger than the violin.

Why did you make the switch from the violin to the viola?
I just wanted to do something different. A lot of my friends were choosing the violin and I picked the viola because it was different.

How did you select your Name That Tune song [John Legend’s “All of Me”]?
I had heard the song on the radio and thought it sounded like it would be a nice song to play. I looked up the sheet music for it and then just learned to play it.

Since you typically play in the Pershing orchestra, how is that working during quarantine?
We don’t have orchestra practice, but my conductor sends us little songs to play and we have to learn them and then send videos in. And I also take private lessons. Those are on Zoom, which is interesting…it’s working pretty well though. 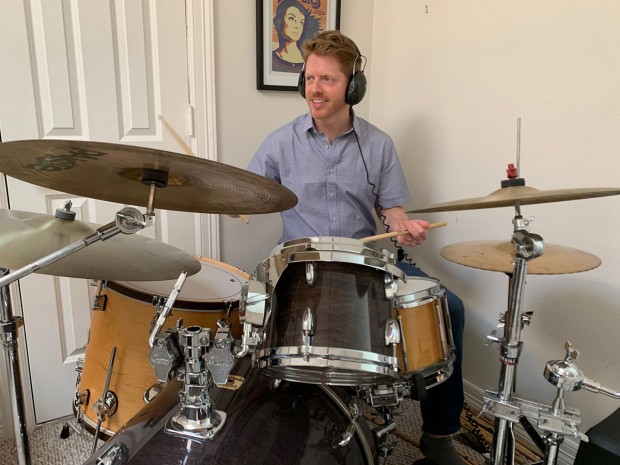 Sam Johnson plays the drums, but only when his 1 year old daughter Eva isn’t home.

How did you first get into music?
I’ve been around music [since I was young]  because my dad used to play in bands. He was a drummer and he sang. He still does play, and my brother is a musician. Growing up, I was around music a lot and had access to instruments.

Which instruments do you play?
I play guitar, bass guitar, and I have some other fun things like a moog synthesizer, but I’m mostly a drummer. I’ve been playing the drums since I was 11 or 12. I played in high school bands. We’d play in bars and my parents would have to be within 15 feet of me because I was only 14 or 15 years old.  And then in college I really played in some bands like a Texas country band, and we played at bars just for beer – that’s how we got paid. I thought it was the coolest thing in the world. We ended up also opening up for bigger acts for small venues around San Marcos and other places.

How often do you play these days?
It’s something I wish I did more. It’s hard to do when you’re working a full-time job and you have a 1 year old running around. You can’t exactly put her down for a nap and then go up to the room above her nursery and start banging on the drums. It’s such a loud instrument and when I play, the entire house shakes. The only time I get to play is when the 1 year old [Eva] is out of the house.

How did you pick the song for Name That Tune? [Led Zeppelin’s "When the Levee Breaks"]
It’s hard with the drums to play something that people will recognize. A lot of beats are pretty standard for different types of music, so you can’t always just hear the beat and know what it is. I tried to pick something where it was at least possible for someone to listen and go ‘oh I know what that is.’ I felt like ["When the Levee Breaks"] was an iconic beat. I really like John Bonham and I figured that would be one that people could guess if I played it well enough. 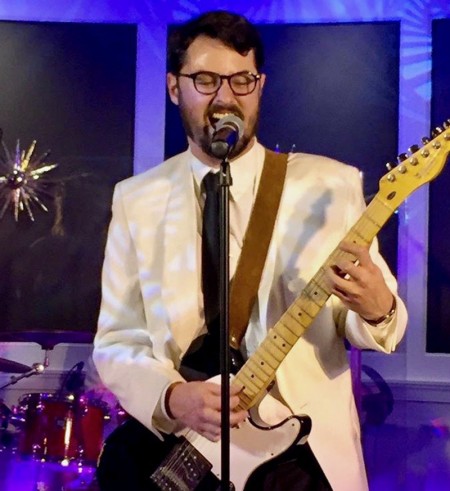 Stephen Frazier comes from a large, extended family of musicians, and he plays in his family's "Band of Brothers."

Age: 30
Instrument: Guitar (and many others)
Profession: Petroleum Geologist

I read about your family in an article we published in The Buzz [The Wedding Singers by Jennifer Oakley, Nov. 2016]. It sounds like you come from quite the family of musicians. What was it like growing up in a family like that?
Oh man. It was magical. There’s so much music constantly around you. It becomes such an important part of your life without you even realizing. It’s been awesome having such a musical family.

How did you end up deciding to start playing the guitar?
I couldn’t tell you why, but guitar was only the first. When I was in fifth or sixth grade, my dad got me a guitar for Christmas and taught me how to play it. I just kept wanting to add to my collection of instruments I knew how to play. A few years later it was the bass, then the harmonica and the mandolin. And of course my mom taught me to sing – she was an opera singer before I was born and when I was really little. I grew up singing and whistling. I almost constantly have a tune playing in my head.

In The Buzz article, you talk about how you were in a band in college. How did that band form?
It was just me and a few buddies I went to high school with who liked to play. A few people who lived on our floor in the dorm heard us playing and the band just kind of happened. We wrote a bunch of our own music.We thought we would make it big, but we didn’t get passed playing a bunch of cover songs at fraternity parties and gigs around Texas and Oklahoma. But I like to tell people we were a touring band.

When you’re getting ready to play at a wedding, what do the rehearsals look like?
We’ve kind of got the workflow down to a science. We normally have a year of lead time, so the first couple of months are spent deciding on the song and getting input from the bride and groom. Then we casually start working on them maybe having a practice every other week or once a month. The last month we have one or two practices a week to really get it together.

Have you started planning your sister’s?
Oh, I’ve been planning this one in my head for years. My dad and I have been talking through songs. She just got engaged last month and then the quarantine happened so it’s been stalled a little bit. Some of it is a surprise, but we always play one song by The Beatles.

Editor’s note: If you play an instrument and are interested in participating in Name That Tune, please email us at [email protected].