Band of Brothers keeps it in the family 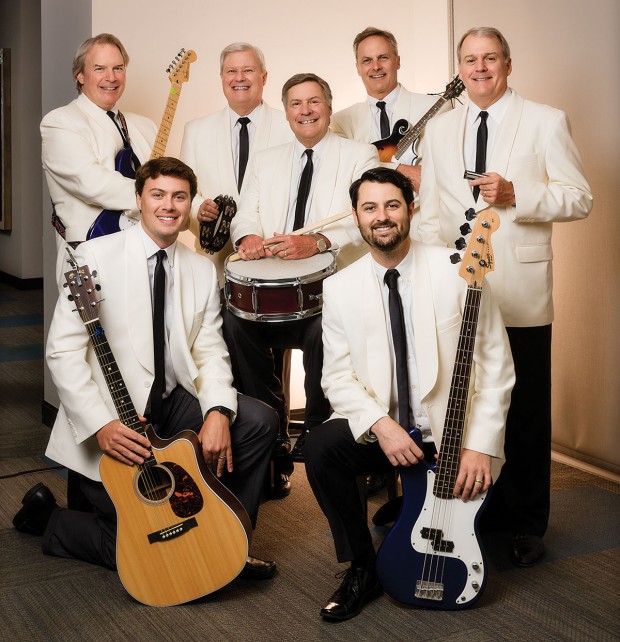 Margaret Frazier gave birth to a band – a band of brothers. The longtime Briargrove resident, along with her late husband L.E., raised their six sons with a focus on love, faith, family and music – a lot of music.

Turns out the Frazier brothers – Mike, Greg, Bob, David, Paul and Joe, from oldest to youngest – took those lessons to heart. All six sons live a stone’s throw from 95-year-old Margaret. Four of the six work together in collaborative family oil businesses. And five perform together in the aptly named Band of Brothers, a classic-rock cover band.

“Music was always important at our house,” says Paul Frazier, who contributes blues harp and vocals. “Our parents played such a big role in instilling a very strong sense of how important family relationships are. The Band of Brothers, which we stole from the Spielberg war miniseries, puts this bond on display for a lot of people to see at the weddings. I think that people who know us well already know how close we all are, but those who don’t seem to be inspired by the bond that we have.”

And what a bond it is among the extended Frazier family. By the numbers, the reach is staggering: a total of 43 – Margaret and L.E.’s six sons and their six wives, 17 grandchildren (eight of whom have spouses) and six great-grandchildren.

The Band of Brothers performs solely at the weddings of their children. With their 17 sons and daughters there are a lot wedding dates on the calendar. So far, they have played at eight of their combined children’s receptions, with more on the books.

“We’re all a bunch of hams,” percussionist Greg Frazier says with a laugh. “Never met a microphone we didn’t like!”

The brothers credit their parents as well as oldest brother Mike for their musical inspiration. “Both L.E. and I made sure that all the boys sang in the children’s choirs at our church [River Oaks Baptist],” says mom Margaret, who graduated from The University of Texas at Austin with a degree in music. “They were not happy about it, but we felt like it was important.”

The brothers now acknowledge that their mother was right about the Sunday singing. “We were ‘all’ – somehow Mike escaped that sentence – in our youth choir at church, so we actually learned some aspects of how to sing on key,” says Greg. 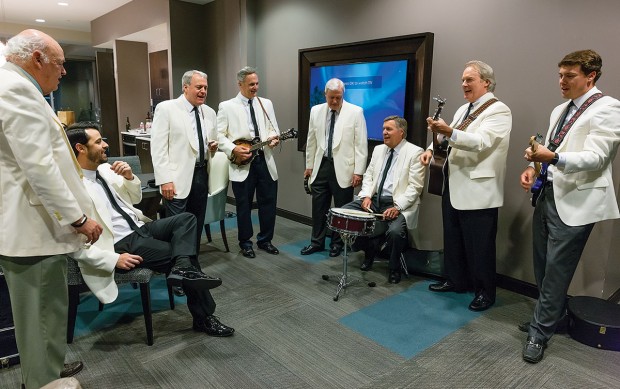 Drum sets and guitars were welcome in the house. “It was just something that they wanted to do,” says Margaret. “The guitar came into popularity because of the music they were listening to,” the “British Invasion” in the mid-1960s. “Mike got so interested in playing the guitar because of his friendship with Billy Gibbons.”

Yes – that Billy Gibbons of ZZ Top fame — whom he was in class with at T. H. Rogers Middle School. Before there was ever ZZ Top, Mike Frazier and Billy Gibbons played in two bluesy rock and roll bands together called The Coachmen and The Moving Sidewalks, the latter of which had a hit song called 99th Floor – it was No. 1 on the KILT-AM chart for six weeks in 1967.

“Mike happened to start the band with Billy Gibbons when I was 8, and here came rock ’n roll into our house like a freight train!” says Bob Frazier, who lives in Briargrove with wife Michelle and who plays electric guitar. “We were all in awe of Mike being in a band, and he started playing Elvis, The Beatles, The Stones and Beach Boys records, and we were all hooked!”

“We had a neat upbringing,” remembers Mike, who lives in Tanglewood with wife Beverly and used to sing in Band of Brothers. “Music has been a big part of my life. I am so proud of these guys, and now I look back here and see the nephews are very instrumental in making it happen.”

At some point along the way, Mike got busy (he is the retired CEO of Simmons & Co. International) and stepped out of the band, and two nephews, Travis Frazier and Stephen Frazier, stepped in. But that is getting ahead of the story – the story about how the Band of Brothers came to be in the first place. 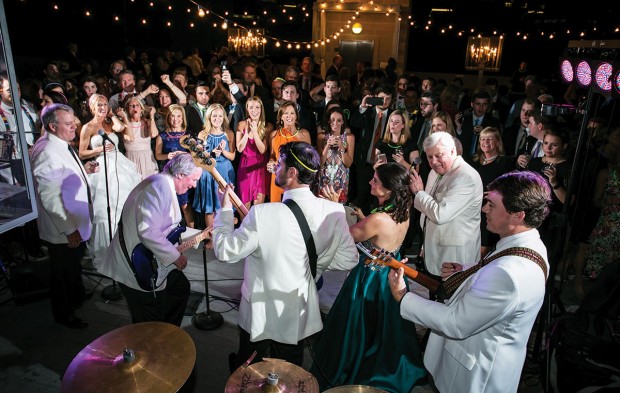 No surprise, it all started with a wedding.

It was 1989, and brother Paul was getting married to Pam. Their reception at The Inn on The Park was in full swing and in an impromptu moment, the sea of brothers jumped up on stage. “The party band we hired was a little surprised when we got up to play Twist and Shout, especially when David hijacked the drum kit and started playing,” says Paul, a Memorial resident who is the executive vice president of Brookfield Property Partners. “The rest of just sang, while our parents danced. It was a night to remember and a little foreshadowing of things to come.”

“The five of us gathered around a couple of microphones while David killed it on the drums,” says Greg, president of Frazier Oil Properties. “Our parents were down in front and loving it. In fact, one of my favorite pictures is of our parents dancing to the strains of their six sons screaming into the mics. That was one of the last pictures taken of our dad.” L.E. died unexpectedly of respiratory failure less than one year later.

Fast forward to 2007, when for Greg, the bittersweet memories of their father dancing away to them singing The Beatles lyrics melded with with the joy of yet another wedding – this time, his son Matthew’s.

“It had been 18 years since our ‘debut’ at Paul’s wedding,” says Greg, who lives in Briargrove with his wife, Jeannie. “Four of the six brothers played the guitar, and David had also taken drum lessons as a kid – it was not much fun to listen to his practice sessions in our house – but he was good, and with Paul having inexplicably taken a few harmonica lessons a few years earlier, we had the makings of a band. So, I asked everyone if they’d consider trying it out for Matthew’s wedding, and everyone was all in.”

And, just like that, the Band of Brothers was solidified.

“We kept it a secret from Matthew and all of the rest of our kids so it would be a surprise,” says Greg. “It was an epic – in my unbiased opinion – performance. Three songs during the real band’s break. Matthew and Mary and everyone else loved it. I know we did!”

The grand slam onstage has turned into a command performance, with each successive son or daughter requesting that the Band of Brothers play at each of their weddings. The brothers knew they needed some parameters for each wedding gig. So, they decided the brother whose child is getting married gets to pick the song list, which they play when the hired band takes a break. And, in a nod to their original performance, each set always contains one Beatles song. Additionally, David’s wife Melanie suggested they dress the part too – and so the white jackets and skinny black ties were added to give them their throwback rock star look.

In the nine years since Matthew’s wedding, the Band of Brothers all say they have upped their game, partly because they practice more and partly because Stephen and Travis joined the band. 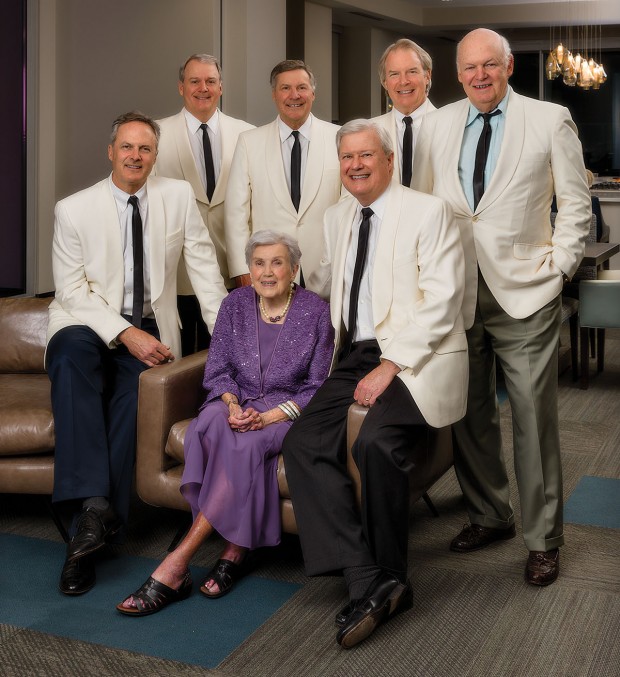 They all point to Stephen, who fronted the Manderly Street Band while he was an undergraduate student at Texas Christian University, as being the “big toe” of Band of Brothers these days. “It’s a line from the movie Stripes,” explains Stephen, who graduated from TCU with a bachelor of science degree in geology. “A foot cannot stand without its big toe. I don’t think they give themselves enough credit though. They played a song without me at my wedding in June, and it was one of the best they’ve ever played.”

The Manderly Street Band had a cult following on campus at TCU, and they played gigs all over the state. It was during those years of getting paid as a musician that Stephen was able to further hone his craft as a lead singer as well as on bass and guitar. After college graduation, the Manderly Street Band members moved on to work and graduate school and they had to disband.

However, Stephen says the most memorable song to date was singing The Beatles’ In My Life to wife Brittany at their wedding reception, with The Band of Brothers all around him. “To be able to play one more time in front of so many friends who hadn’t seen me play in years was something amazing,” notes Stephen, who is a geologist with Frazier Exploration Partners. “And to do it all with my dad and uncles right next to me was one of the greatest experiences of my life.”

Backed with Stephen’s musical knowledge, The Band of Brothers now spend considerably more time practicing and playing. “For our most recent wedding, we prepared seven songs with 13 rehearsals over a 149-day period,” says Joe Frazier, who hosts all of the band’s practice sessions at his and wife Claire’s Southgate home. “We have ramped it up over the years. I think the main driver for this is that our rehearsals are a blast.”

David’s son Travis, who recently joined the band, agrees. The Band of Brothers had played at his own wedding in 2011 when he married wife Sarah. And going from watching on the dance floor to moving up to performing has been gratifying. “It was obviously exhilarating to play on stage,” says Travis, who lives in Briargrove. “But I am pretty sure everyone would agree that the best part of the event were all the practice sessions leading up to it. The crazy thing about our family is we don’t need a reunion as an excuse to hang out together. Some of my best friends are my brothers and cousins, and obviously my dad’s best friends are his brothers. We hang out with each other on the weekends and are in each other’s weddings. At the center of all of this is Nana.”

Margaret – Nana – is delighted to be known as the heartbeat of this band of brothers. “They have so much fun, and it is so wonderful for me to see them having such fun!” she says.

In January, Joe’s son Robert will be getting married to his fiancee, Katherine Hine. The wedding reception will be at the Houston Country Club. And true to form, the Band of Brothers will be up on stage, keeping it in the family.

Editor's Note: Everyone at The Buzz was so saddened to hear that Margaret Frazier passed away, just 22 days after we met her at the photo shoot to accompany this story. She looked so beautiful and happy, surrounded by family. We offer our deepest condolences to the Frazier family. Read more on Margaret and the Fraziers here.