The Parade Goes On: An Art Car Parade of One

On Monday morning along Mullins, groups of students and their parents - spaced at least six apart - cheered on Parker Elementary’s art teacher as she inched Parker’s lion-themed art car down the street. Parker students had worked for nearly seven months to design and decorate the school’s art car. With the 2020 Houston Art Car Parade cancelled because of the coronavirus pandemic, Dickinson – known as Ms. D. -  wanted to recognize their efforts.

So two days after the parade date came and went – which happened to be the morning of Dickinson’s birthday - she drove to Parker with her husband, Ryan Dilbert. Together they pulled the tarp off the bright yellow car decorated with painted violins, cellos, guitars, and even a keyboard, a nod to the school’s music magnet status. Parker’s mascot is the lion. Dickinson drove the 1999 Ford Taurus through Westbury streets for nearly an hour.

“It was a lot of fun to see the kids and show off all our hard work,” says Dickinson.

HISD’s news last week that the district will remain closed for the remainder of the school year, providing online instruction instead, was upsetting, adds Dickinson. “I knew we weren’t going to go back. But still, it was hard to hear the news. It was so nice to see the kids out there. I really miss my students.”

Dickinson marked her route through Westbury on a map she posted online. She and her husband set out just before 10 a.m. to coincide with Parker music magnet students’ regular Monday morning quarantine flash mob.   For the last month, students touting violins and cellos play every Monday morning in their front yards for neighbors. 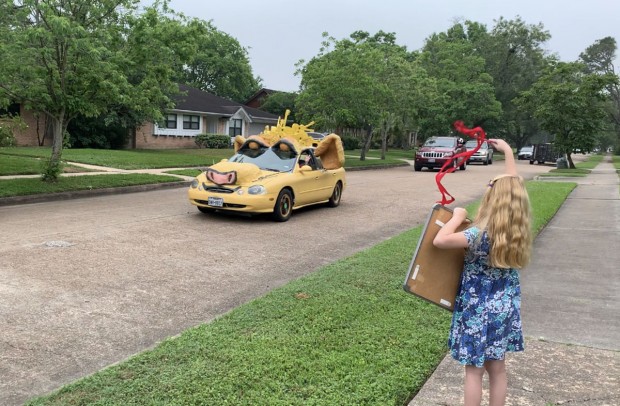 Dickinson had wanted to make an art car last year, but couldn’t find a car. This year, a parent of a kindergarten student donated a car his neighbor gave him that was sitting in his driveway. Dickinson called AAA and had the car towed to the school parking lot.

Parker parent and artist Ashley Hope organized a team of parents to help with the project, while students in Dickinson’s after-school art club, a mix of third, fourth and fifth graders, primed the car. Students in younger grades painted the donated violins, cellos, guitars and other instruments that make up the lion’s mane.

“The kids did a lot of the work,” Dickinson says.

First-grade parents Meredith Grover and Mike Higgins donated an electric guitar, while parents Tammy Biser-Sherborne, Sonia Tamez and Shane Allbriton climbed on top of the car to secure the instruments. 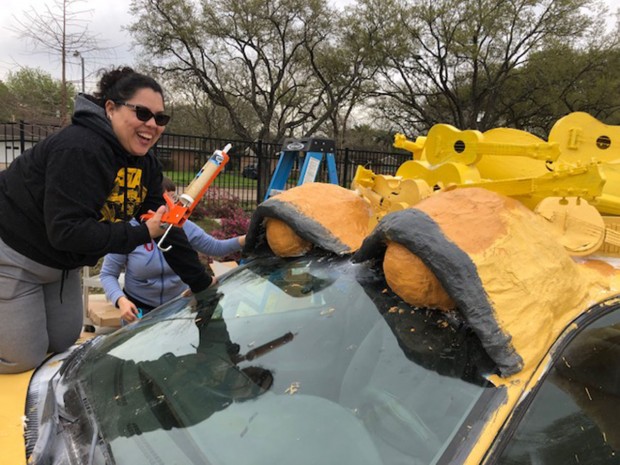 Sonia Tamez was one of several parent volunteers to help with the project.

The month of March was supposed to be for adding finishing touches, like touching up the paint, adding details like pupils in the eyes, and letting students decoupage parts of the car with sheet music, says Dickinson. That work will go on when it can, she says, and the car will appear in the 2021 Houston Art Car Parade.

For now, Dickinson hopes to drive the art car through the neighborhood once a month, but first she’ll have it looked at after it started smoking toward the end of the route. “I’m hoping it’s just the fluids that need to be topped off,” she says, “or maybe an oil change.”

Later that day, Dickinson’s husband and two daughters, Vera Dilbert, 3, and Lucy Dilbert, 7, baked her vanilla cupcakes with chocolate icing and sprinkles, and her husband surprised her with a Zoom birthday party with friends from across Texas. But her spin around Westbury streets earlier in the day, “that was the highlight of my birthday,” she says. 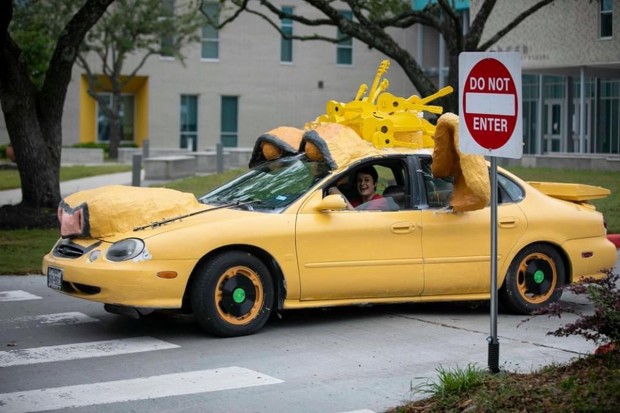 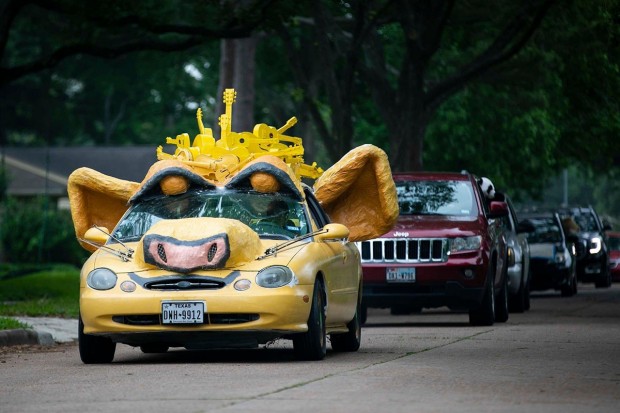 The lion-themed car is decorated in donated musical instruments. 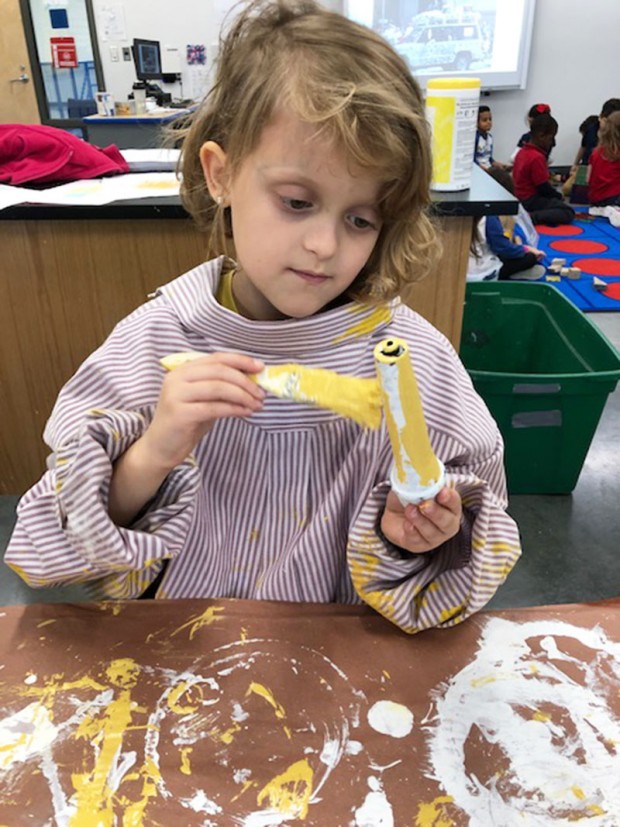 Lucy Dilbert painted a toy microphone to add to the art car. 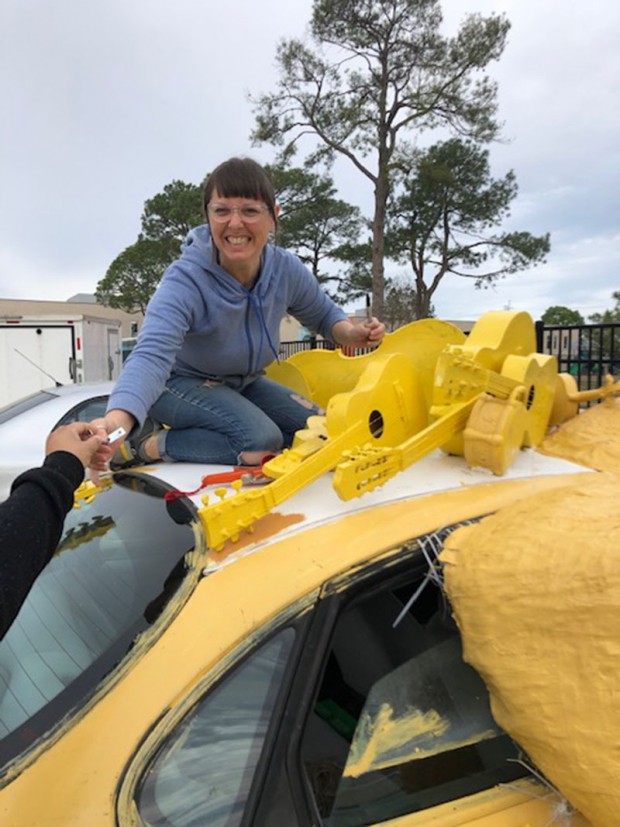 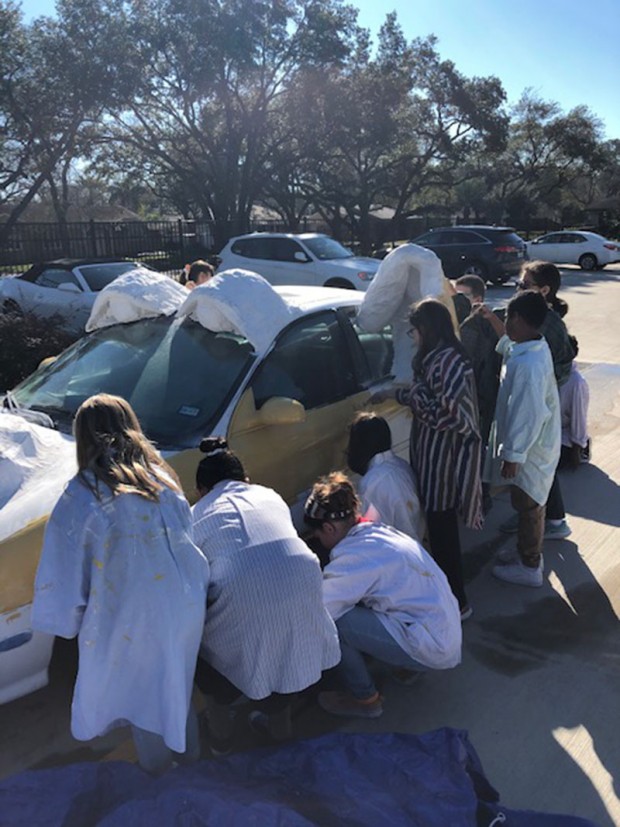 Dickinson's art students were involved in the project from day one. 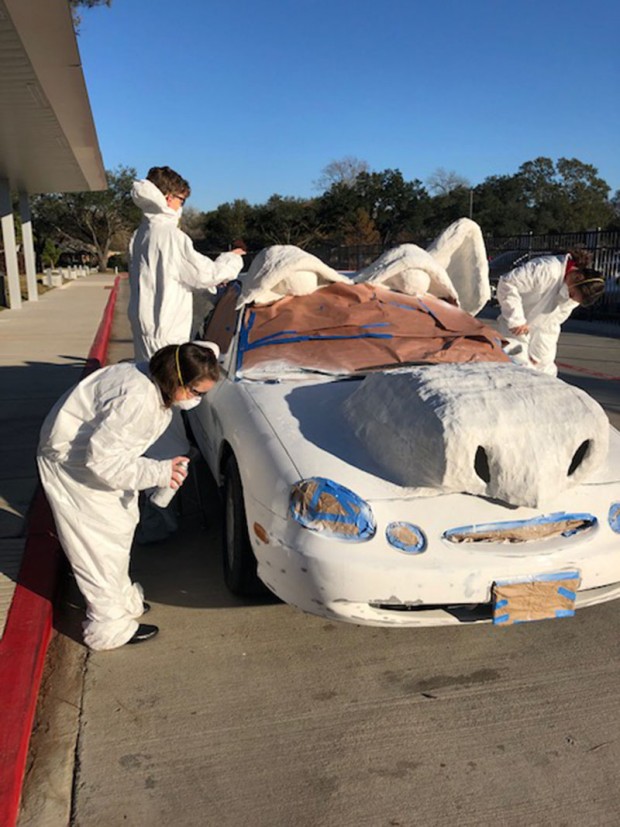 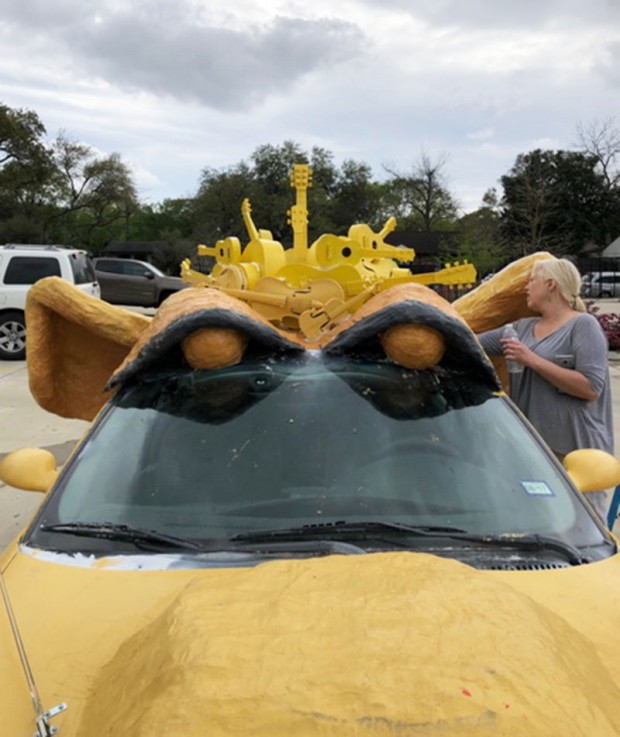