So, it wasn’t quite the prom the St. Thomas High School Class of 2020 had hoped for, but virtual prom for this group of seniors and their dates definitely had some of the world’s coolest chaperones.

The Eagles were scheduled for their prom to take place on Sat., April 4. The venue and the DJ had been reserved. But then along came party pooper coronavirus, which put everything on hold.

As the scheduled prom date came closer and the weeks of social distancing kept rolling by, some of the seniors’ moms realized their kids were getting bummed about missing their friends, school activities and senior-year milestones like prom.

The moms were also bummed about missing all the prom festivities like gathering together beforehand with parents and kids to take photos of everyone all dressed up before heading to the big dance.

So the moms decided to host a pre-party - like they would have normally done before the prom – but, this year, it would be as a Zoom video conference call. They called it a Prom Virtual Pre-Party.

Some of the teenage boys were a little skeptical but with some extra nudging, they agreed to take a break from their video games . . . which was good because something was about to happen on the Zoom call that would be even more entertaining.

The 7 p.m. start time for the Zoom call arrived. It was a whirlwind of activity for the first 10 minutes as St. Thomas seniors and their dates signed in and everyone said hi as names and faces appeared on the screen.

Suddenly, someone said, “Hey, did I just see Lance McCullers? Is Lance McCullers on our call?” People are always playing pranks, so everyone just thought it was someone messing around. Writing a fake name.

There was some more rustling of background noises, nervous giggling, students saying hi to one another appearing on the call. Then someone else shouted, “Was that Alex Bregman? Whaatttt?? That is Alex Bregman! And Lance McCullers!”

The Astros’ stars chatted it up with everyone. Telling jokes, asking what people had been up to. If anyone had been playing Fortnite. Calling out names on the screen to say hello to everyone. A few of the girls showed their families - all were in disbelief that the Astros players had actually “zoombombed” their Prom call.

One of the seniors from Duchesne said, glowingly, “I was already happy just to be getting on a call with our friends. We are all still bummed that the St. Thomas prom didn’t happen, but just doing something was nice. I was so happy to see everyone. And then when I saw Lance McCullers’ face . . . . and then Alex Bregman . . .  I was so surprised. I am a huge Astros fan and that just made my night. It was the best distraction from the quarantine ever.”

A St. Thomas senior added, “That’s so cool that they took the time to do that for us. It was really great. “

Then it was time for the virtual prom to reach its ninth inning and #43 and #2 had to say goodbye and take it back to the clubhouse. They wished everyone well and left the call. One still-in-shock senior said what everyone was thinking: “Did that really just happened?!”

The Zoom call participants smiled the biggest smiles they had smiled since pre-quarantine. They suddenly forgot all the prom moments they were missing like the pre-parties, photos, ball gowns, tuxedos corsages, boutonnières, dinners, limos, DJs, after-parties and so on. Instead, they just laughed with their friends. Sure, it was through a phone screen, but it still felt good.

Fifty years from now when they reflect on their prom, these members of the Class of 2020 won’t remember all the things they missed that night but instead they will grin and tell their grandkids about that night's really cool and unanimously picked Prom Co-Kings (and fellow Zoom Ragers) Lance McCullers and Alex Bregman.

Editor's note: Congratulations to the Class of 2020! Share with us where you're headed to college - fill out this survey for an opportunity to featured in our annual "Where are they headed" print article. 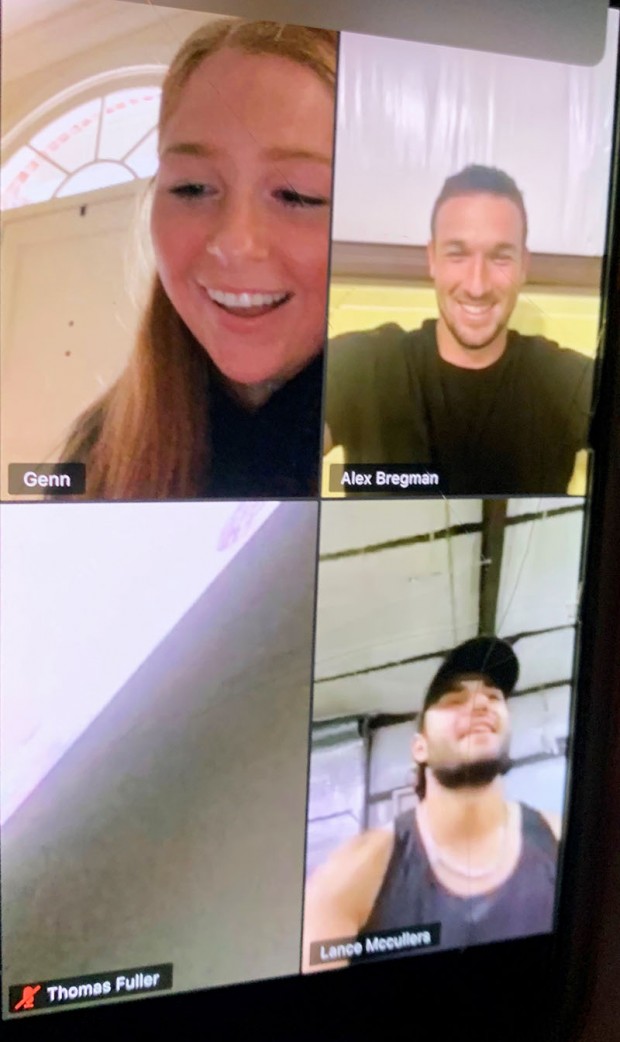 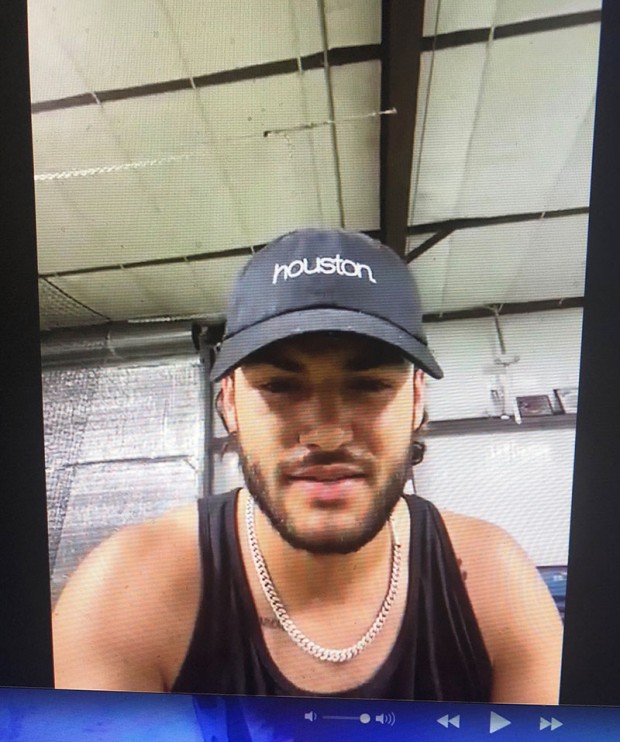 Lance McCullers was nice enough to accept the invitation to the virtual prom for this group of St. Thomas High School seniors and their dates. 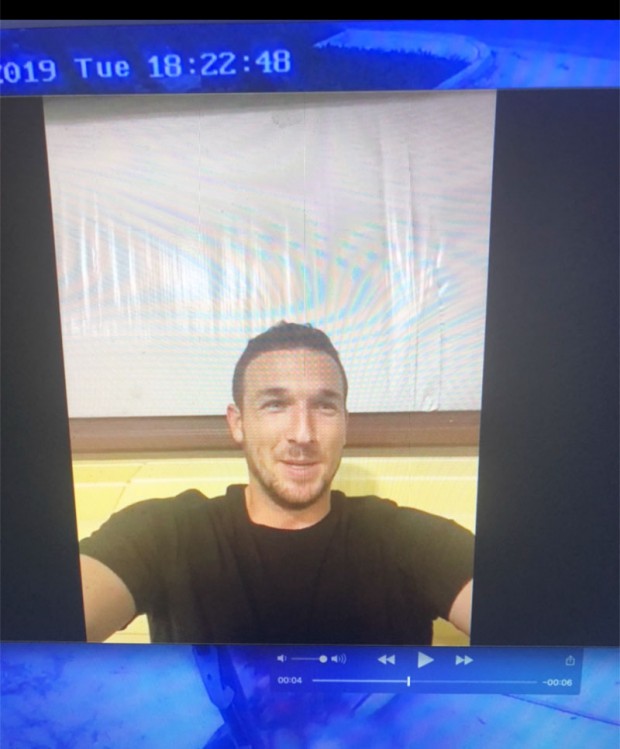 Like his batting skills, Alex Bregman's Virtual Prom partying skills were out of the ballpark. 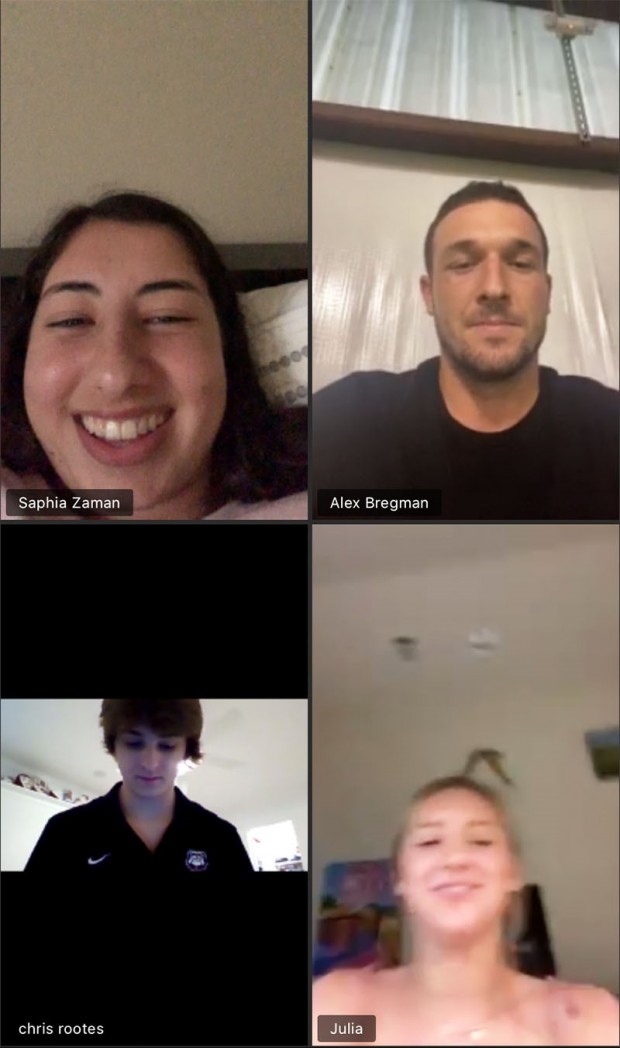 Saphia Zaman, Chris Rootes and Julia Cook cracking up, still in disbelief to be on the same video phone call with Astros player Alex Bregman. 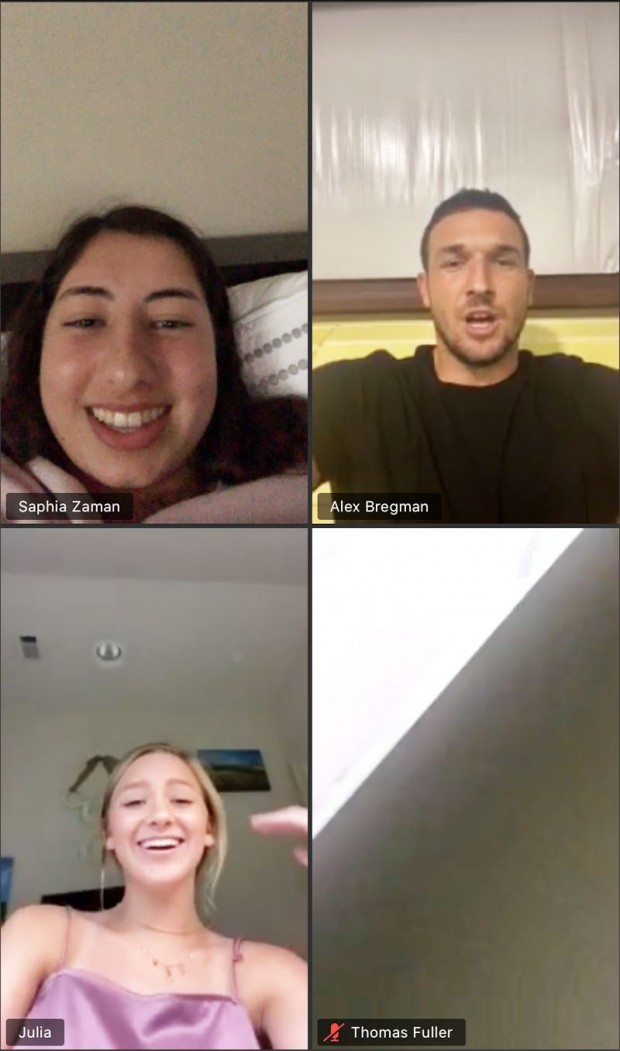