A Life in Recipes

Through good times and bad 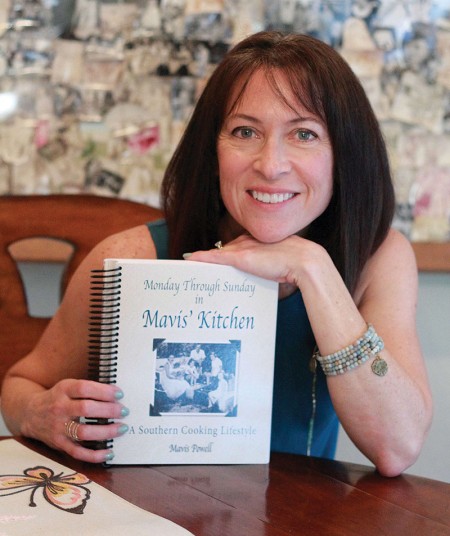 COOKING WITH MAE-MAE Shannon Gosda published a book of her grandmother Mavis “Mae-Mae” Powell’s recipes, which tell the story of her life. (Photo: Joanna Brandt)

Shannon Gosda recently wrote to “Back Porch Table,” a weekly recipes blog I write at thebuzzmagazines.com. She wrote that she related emotionally to what we were doing “because I, too, love connecting recipes with memories.” Then she shared with us how she did just that, in a very special way.

“My grandmother Mavis was the most amazing Southern cook – of course, we’re biased – ever,” says Shannon, a preschool teacher and mother of Zach, 14, GG, 11, and Marinn, 10. “We all grew up on her amazing cooking. In the 1950s, she and my grandfather hosted lots of parties, and that was when people got dressed up for everything. They gave their kids a fun, family-filled life that revolved around food and good company.”

As it is for many of us, food was how Mavis, or Mae-Mae, as her grandchildren called her, showed love to her family. Shannon found a way to show that love right back to Mae-Mae.

“As my grandmother aged, we started to be terrified that she might die and we wouldn’t have all of her recipes,” Shannon says. “When she was about to turn 90, my Aunt Holly realized, ‘We’ve got to do something right now, because the clock is ticking.’” That something was to compile Mae-Mae’s recipes and stories and turn them into the book Monday Through Sunday in Mavis’ Kitchen: A Southern Cooking Lifestyle.

“For us,” Shannon says, “these recipes were a legacy. They had to be in print.”

Holly, who lives in Los Angeles and had written a book previously, took charge, finding a template online that allowed them to enter recipes to create a book. “But there was really no way to be creative and cute and fun,” Shannon says. “We were in a major time crunch because everybody was getting together in Dallas for Mae-Mae’s 90th birthday. Aunt Holly wanted to do a book signing, so we got it done and had books in hand.” Mae-Mae signed them for everyone in the family.

After the work of the first book, Holly and Shannon took a break. The problem was that Shannon had a background in editing and writing. “I was very aware that this book was inconsistent and boring, with a bad layout,” she says. “I knew this could be something really special. So I started going to Dallas to visit with Mae-Mae, and I sat down with her and went through the book.

“I started asking her, ‘When did you make this?’ and ‘Tell me a story about this.’ We pulled out boxes and boxes of pictures. And we started putting the pictures together with the stories that were connected to the recipes.

“It was just glorious, interviewing her.” 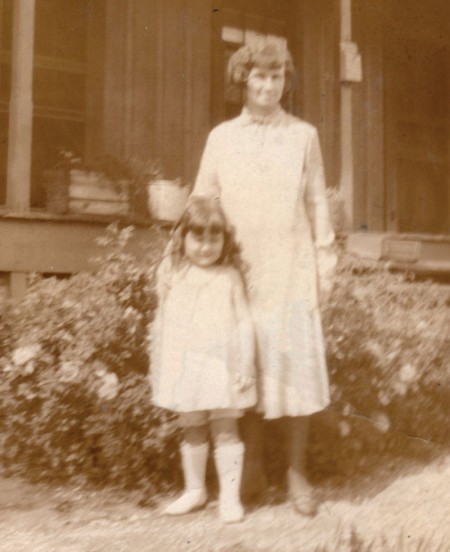 PEARLIE’S LEGACY During the Great Depression, Pearlie Hollingsworth, Mavis’ mother, here with a young Mavis, would share her vegetable soup with anyone walking by who was hungry.

Holly and Shannon redid the book together, which was made easier because Holly already had a graphic designer and publisher. “The majority of the recipes in the original book were Mae-Mae’s handwritten notes,” Shannon says. “Holly took a pile, and I took a pile, then my mom [Nancy Powell Bartlett] and [my mom’s sister] Janis had some recipes they had put in online in the original book. I sat down and went through the whole thing and marked up everything.

“I manually put the whole thing in Word. I put pictures and captions where I wanted them and did the table of contents and counted pages and did an index. After that, I sent it all to Holly, who sent it to her publisher, who formatted it and had a graphic designer put it into a format to print. I don’t know what that magic is, but it’s magic!”

Mae-Mae saw the book before she died, just before her 95th birthday, in 2017. Shannon says, “She joked, ‘My kids pushed me into doing this book because I might die!’ But as she got to the end of her life and saw the book, it felt like the culmination of all her joy. She was thrilled beyond words, out of her mind, smiling and beaming ear to ear.”

Recipes include stories about the first thing Mae-Mae ever made for company, Chili and Tamales con Queso, and the soup that her mother would make for “hobos” passing through during the Great Depression, Pearlie's Vegetable Beef Soup (with Mavis’ Additions).

“Considering the strange times we are living in,” Shannon says, speaking during the coronavirus health crisis, “the story provides a snapshot in time during the Depression, which is a reminder that humans have been through, and come out victorious from, tougher times than this.”

Also, Shannon says, the recipes use ingredients “that should be available at stores, and they’re good comfort food, which we need right about now.”

Shannon learned about more than recipes from her visits with Mae-Mae. “Life-application things,” Shannon calls them. “There was a super funny story about how to survive on a mutiny cruise ship! They were on a cruise going to Bordeaux, and before they docked, the staff mutinied and refused to work and disappeared. Mae-Mae said the passengers were just walking around. She told this story like, ‘Well, we all just went down to the ballroom and made ourselves drinks and had so much fun!’”

Today, while everyone sticks to home, Shannon’s sixth grader GG has started baking her grandmother’s recipes. “She made cinnamon sticks today,” Shannon says. “They’re typically only for Christmas, but nothing is typical now. I was like, ‘We’ve got pecans, let’s go for it!’

“By the way,” Shannon told us, “I so enjoyed ‘The let's-get-real-about-the-pantry edition’ [of “Back Porch Table”]! To your list of must-haves [while staying home during the coronavirus outbreak], I ‘hoarded’ four giant rolls of slice-and-bake cookies and four boxes of wine, because when it's in a box, wine doesn't go bad. But don't share that with anyone since that might cause a run on box wine!”

From Monday Through Sunday in Mavis’ Kitchen

In the top of a double boiler, pour in chili and tamales and use a fork to mash the tamales. Stir in grated cheese to mixture. Add garlic, onion, Worcestershire and Tabasco. Stir constantly until cheese is melted. Serve hot with Fritos or tortilla chips.

From Monday Through Sunday in Mavis’ Kitchen

In a Dutch oven (or large soup pot), brown seasoned soup bone and meat in olive oil for 5 minutes. Add the onion, celery and bell pepper; stir. Cover and steam about 5 minutes. Add chicken broth, beef broth and 4 cups water and cook over low heat for 20 minutes, allowing meat to season the broth. Add canned tomatoes (including liquid) and tomato sauce; stir. Add seasonings as needed. Cover and simmer for about 1½  hours or until meat is tender. Remove soup bone, remove meat from bone, and add meat to the soup. Add bone back to the soup for flavor.

Add all the fresh vegetables you want, bring to a boil, then add frozen vegetables. Reduce heat, check seasonings, and cover. Then sit down and have a nice cup of coffee and enjoy the break! Add more water or broth if the soup is too thick. A dash of Tabasco gives a little lift. Serve with crackers or cornbread.