Responding to Acts of Racial Violence 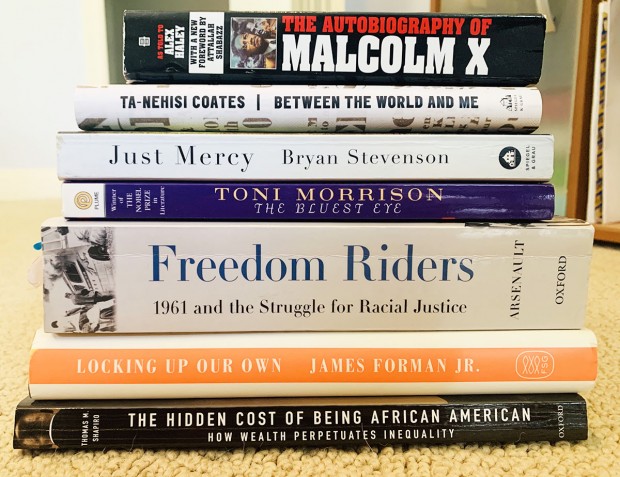 These are just a few of the many books that can be helpful resources to educate yourself on race in America. (Photo: Pooja Salhotra)

Pooja Salhotra, 26, is a Buzz writer passionate about social justice and specifically interested in criminal law. She previously interned for the Legal Aid Society in Manhattan, working with public defenders on investigations for criminal cases. See some of her other articles about social justice here.

Several incidences of violence against black people over the past several weeks have again brought to light that racial injustice continues to plague the United States in 2020. Most recently, a 46-year-old black man named George Floyd died in Minneapolis, Minnesota on Monday. In a video that surfaced, a white police officer is shown kneeling on Floyd’s neck for seven minutes, as Floyd pleads repeatedly “I can’t breathe” and then “I’m about to die.”

The death of Floyd, who formerly resided in Houston and was a beloved member of the Third Ward community, is sadly only one of many horrific incidents of violence against black Americans.

Donate to the George Floyd Memorial Fund
This GoFundMe was created by Floyd’s family in Houston in order to cover funeral and burial expenses, mental and grief counseling, lodging and travel for all court proceedings, and other assistance for the family as they continue to seek justice for George. A portion of the funds will go to the Estate of George Floyd for the benefit and care of his children and their educational fund.

Sign a petition and make phone calls to seek justice for George Floyd
Join Grassroots Law Project in making calls to County Attorney Michael Freeman who has the power to arrest and charge the police officers involved in Floyd’s killing. You can also sign a petition demanding that the police officers involved in the case be held accountable. The police officer who knelt on Floyd's neck was arrested Friday; the petition still stands and calls are still helpful as he will still need to be charged and sentenced. A similar petition exists to seek justice for Breonna Taylor, a 26-year-old black woman who was fatally shot inside of her home in March after officers forced their way into her home. Also visit this website to seek justice for Ahmaud Arbery, a 25-year-old black man who was running in his neighborhood in Georgia earlier this year when he was fatally shot by two white supremacists.

Share and discuss the stories of George Floyd, Ahmaud Arbery, Breonna Taylor and other victims with your friends and family members. Having tough conversations about these acts of violence is an important action you can take to bring heightened awareness to racism.

Commit to reading about race. Here are some works I’ve found particularly helpful:

Watch these films and shows that discuss racism:

Editor’s Note: Rania Mankarious, CEO of Crime Stoppers of Houston, will be writing on this topic this Sunday as part of her Sunday Mornings with Rania blog. Follow the blog here.