Don’t remind me - we are all still (hopefully!) playing it safe and social distancing, which isn’t great for the live concert scene. However, there are always silver linings; this quarantine has inspired artists to find creative ways to celebrate and share music with others. And although we can’t gather in person, we can still enjoy new music being released as well as entertaining virtual events, like the ones listed below!

Virtual New Orleans Jazz and Heritage Festival
My favorite music festival, Jazz Fest, was cancelled this year due to coronavirus. The Fest will be hosting a virtual celebration for usual festival-goers on Facebook Live, where quarantiners can listen to live recordings from past Jazz Fests while simulating the experience in folding chairs, baseball caps, a good sit in the sun, and perhaps some Cajun cuisine. I was supposed to be heading to NOLA for the first weekend of Jazz Fest this year. Instead of being sad about not being able to go (although I might still shed a commemorative tear or two), I decided to pay homage to my favorite Cajun dish served at Jazz Fest, Crawfish Monica, by attempting to cook my own version. Although it didn't compare to the original, it’s still a great way to celebrate! Tune in to the festivities on Jazz Fest’s Facebook page and New Orleans radio station WWOZ through the fest’s end on May 3.

Virtual Party on the Plaza benefitting the Houston Food Bank
On May 2, Houston First is sponsoring a virtual Party on the Plaza, showcasing local musicians and celebrities. Originally scheduled to take place at Avenida Houston, the event will continue as scheduled - just from the comfort of our own homes! Expect appearances from Hugo Ortega, Mayor Turner, Alex Bregman, Bun B, and Scott McClelland. The event is hosted by Deborah Duncan and can be seen on Channel 11 and Channel 11’s Facebook Live, starting at 7 p.m.

Garth Brooks + Trisha Yearwood at the Grand Ole Opry
In keeping with Grand Ole Opry’s tradition of having a concert in its hall every Saturday night, GB and TY will be performing virtually May 2, 7 p.m. central.

MFAH on the Mat
On May 3 at 11 a.m., the Museum of Fine Arts Houston will be hosting their weekly virtual yoga session featuring a lesson from teachers at Black Swan Yoga. The event will be hosted on Facebook Live, so tune in there and at the link here. Also recurring on May 10!

Rice Alliance Energy Tech Venture Day
Formerly held at OTC, RAETVD is now a virtual event with time for networking and business pitches. Forty new energy technology companies will all be pitching their ideas (in 2.5 minutes each) - this is like the real Shark Tank), with time afterwards for networking, consultations, office hours with industry experts, and more. This event takes place on May 7 from 9-11:30 a.m.

The Buzz Virtual Workout
Work out with The Buzz from home! Join for a free, one-hour workout via Zoom, Thurs., May 7, similar to the workouts The Buzz hosts with Pledge To Fitness at Evelyn’s Park. Register here.

Fight to the Finish Flyover
On May 8, the Lone Star Flight Museum is putting on a flyover all across Houston to honor the 75th Anniversary of VE Day. Nearly 30 rare and historic warbirds will be participating in the flyover, all for your viewing pleasure! The planes will begin to take off at 11:45 a.m. from Ellington Airport, and will fly a 120 mile flight plan over Houston, landing back at Ellington at about 1:10 p.m. Check out the website for the flight plan!

Big Freedia’s Friday Night Shakedown
On May 8 at 8 p.m., New Orleans “bounce” musician Big Freedia will be doing a live virtual performance over Facebook Live. Any proceeds raised from the event will go towards the New Orleans Disaster Relief Fund.

Dickens on Dickens—Facebook Live Lecture
From 2-3 p.m. on May 8, join the great-great-great granddaughter of Charles Dickens for a lecture on Dickens and Galveston’s popular event, Dickens on the Strand. Keep a lookout for other Galveston historical events with the Galveston Historical Foundation.

Virtual Blanket Bingo
From 5-7 p.m. on the 9th, join Market Square Park for a virtual bingo game! Entering the game is free, but donation to “Houston Shift Meal” are encouraged. Winners get prizes!

Houston Symphony Living Room Series
The Houston Symphony is hosting weekly virtual shows every Friday during May featuring a music performance from a Symphony member inside their home, followed by remarks from that performer about the piece, as well as a question and answer period. It’s a unique chance to get up close and personal with Symphony musicians. Each performance costs $10. A private link will be sent to you register. Read about the slated musicians here.

And because you may want some new music suggestions for your own personal Quarantine Concert, I have provided a list of some of the music I have been listening to recently. Any new suggestions? Let me know!

CALM, the new album from 5 Seconds of Summer
If you listen to just one song off this album, listen to “Wildflower.” It will be stuck in your head for DAYS (in a good way).

DaBaby’s new album, BLAME IT ON BABY
If you’re a rap fan, you likely already know about DaBaby, who shot to fame within the last year or so. He was featured as the musical guest on SNL a few months ago and has a great energy. My favorite song off the album: ROCKSTAR.

Bob Dylan’s new album, Murder Most Foul
Not an album as much as it is a very long song (17 minutes, to be exact). Bob Dylan is a genius, but I’ll probably stick to listening to his older works. Dylan is having another moment though: Coldplay’s Chris Martin recently covered Dylan’s song “Shelter From the Storm” in his virtual SNL performance a few weeks ago. Some of my favorite Dylan songs to listen to: “All Along the Watchtower” (bet you didn’t know he wrote this song, made popular by Jimi Hendrix!) , “Jokerman,” and “Knockin’ on Heaven’s Door."

Editor’s note: Check out our Buzz Quarantine Tunes Playlist for some fun songs and good vibes. 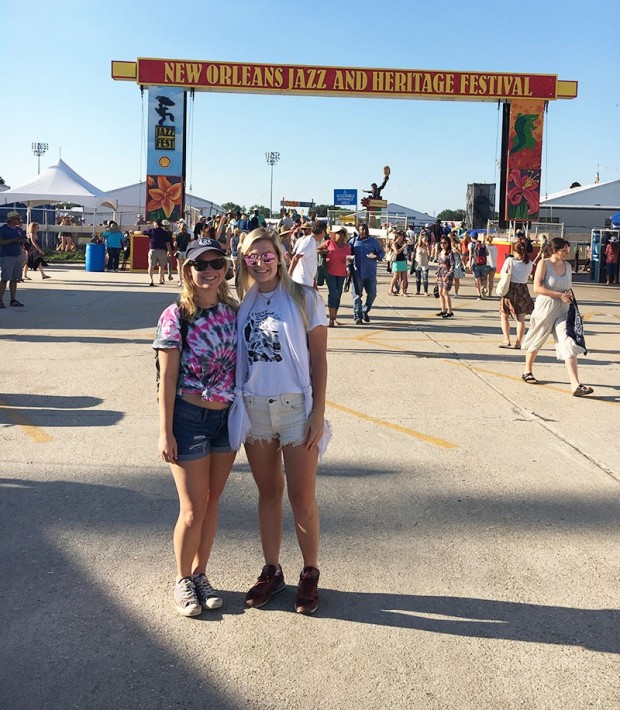 Haley Kurisky was disappointed her favorite festival, Jazz Fest, was cancelled this year but she's glad fans still have to option to listen online and celebrate in spirit. Here, she's pictured with her sister, Holly, at the festival in 2017. 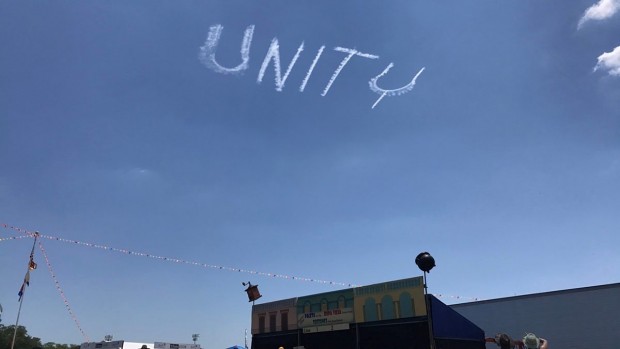 A snapshot of skywriting from a previous Jazz Fest, which Haley felt was particularly fitting to remember today.