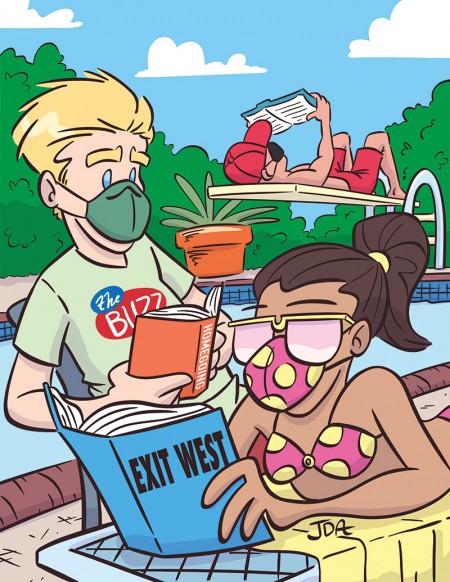 Even as the summer of 2020 looks different from summers past, one thing remains constant: We are hungry to find books that will inspire, educate and entertain us through the long, hot days.

Stefanie Trachtenberg and her son Jacob, a recent St. John’s School graduate headed to Bowdoin College, are both avid readers whose top reading-list suggestions are books that opened their minds and expanded their perspectives.

“My first pick is a book I think should be required reading for all high school students,” Stefanie says. “It is a standout in understanding the African-American experience in America.” That book is Homegoing by Yaa Gyasi, a debut novel and winner of numerous accolades and awards.

The story follows eight generations of a family, beginning with two half-sisters born in Ghana in the 18th century. One marries an Englishman and remains in Africa, living a comfortable life. The other is captured, sold into slavery and sent to America. Each chapter focuses on a descendant of one of the sisters, each from a different generation. In 2017, the year Homegoing was published, an Amazon reviewer wrote, “I…consider myself a[n]…open minded person, but this book opened my eyes to just how ignorant I still am.”

“If you have one book you’re going to read this summer, this is it,” Stefanie says.

Jacob’s No. 1 recommendation comes from his senior honors English class. Between the World and Me, by Ta-Nehisi Coates, was a Pulitzer Prize finalist and tops many current “must-read” lists (at the time of this writing, it is sold out on Amazon).

“I think it’s really important to understand what life is like for people who don’t have the same background as you,” Jacob says. Between the World and Me is an intimate series of letters from Coates to his teenage son on what it is to be black in America, offering both insight into where we stand today and reflection on how to move forward. Jacob says, “This book did a great job of showing what it is like to be black in this country. It’s a history of structural racism. You can’t be ignorant to history, or else you’re part of the problem.”

To her list, Stefanie adds Home Fire: A Novel by Kamila Shamsie. Another book about background and perspective, Home Fire is a love story that explores jihad and ISIS as a framework for family connection, and also for strife. “This book actually allows you to see why somebody might join ISIS, and the larger ramifications on their family and others who don’t support it. I could really feel how the characters felt. It’s fascinating. I don’t agree with their choices, but I can understand them.” Some have likened Home Fire to a modern version of Sophocles’ Antigone.

“I also absolutely loved We Were the Lucky Ones by Georgia Hunter,” Stefanie says. “It’s a true story about a Jewish family during World War II, but it’s not about the Holocaust. It’s a story of how people can face adversity and triumph. If you didn’t know it, you would never believe this was a true story.”

Stefanie adds a few more favorites to her list: Before We Were Yours by Lisa Wingate, The Stationery Shop by Marjan Kamali, The Dutch House by Ann Patchett, and The Paris Architect by Charles Belfoure. And, “for anyone who’s had family drama,” she says, “The Floating Feldmans [by Elyssa Friedland], which is quite a funny story about a family forced to go on a cruise for the mom’s 70th birthday.”

Jacob adds to his list: Sapiens: A Brief History of Humankind by Yuval Noah Harari, which was also a summer-reading pick of President Barack Obama, Bill Gates and Mark Zuckerberg. “This is a new way of looking at history,” Jacob says. “It’s a different way of looking at the world that everyone should check out, because we’re getting one narrative that everything is getting better. Well, maybe it is in some ways, and maybe it isn’t in others.”

And he adds another book introduced to him in class, Exit West: A Novel, by Mohsin Hamid. “It’s a fresh take on the refugee crisis and the world’s borders, and it adds some magical realism,” Jacob says. “It’s very relevant. The author is brilliant and has a unique style of long sentences that go on for two pages.”

Jacob, we will be in touch after you leave for new adventures in Maine this fall. We’re pretty sure college will give you more books to add to this list, and we need to know about them.