A year of school on the road 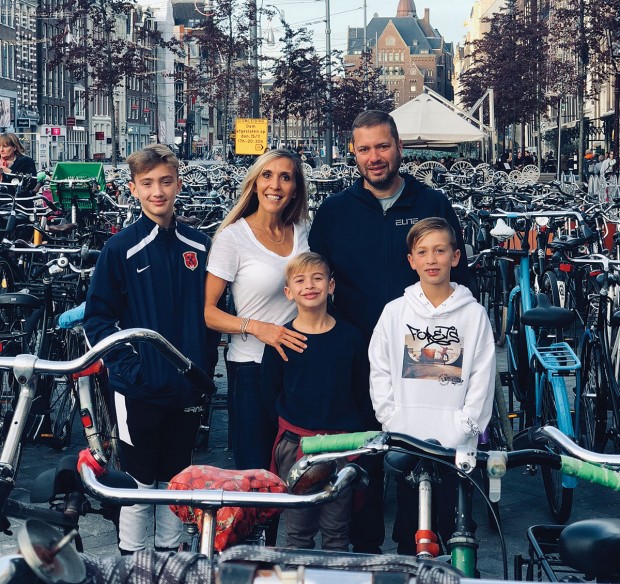 BIKER’S PARADISE Amsterdam amidst a sea of bicycles, the preferred mode of transportation in Holland. From left: Noah, Cassie, Niles, Spencer and Nelson Neumann.

It was something that Cassie Neumann had had on her bucket list for a long time, and for the 2018-19 school year, she and husband Spencer finally decided to do it. They took Noah, Nelson and Niles – at the time, 12, 10 and 7, respectively – out of school and on the road for a year.

Today, as they shelter in place in Bellaire, they are homeschooling as so many families are – and they are drawing on a year of ample experience in doing so, as well as the many learnings from their global expedition.

“We were kind of scared, but Spencer said why not? If not now, when?” said Cassie. “There were lots of doubters and naysayers. Even the people who trust me and love me were saying, ‘Are you sure you want to do this? You’re pulling them out of school, and are you making a good decision….’ But we just kind of went with our gut and said, ‘Well, we can’t ruin them in a year, so we’ll see.’”

She laughed. “It ended up just being so amazing for everyone. Were there times it was exhausting? Yes. We’re a family who doesn’t relax when we’re on vacation. We work, and we move, and it’s not really a vacation – we need a vacation when we get home from the vacation.”

Cassie, who has her own interior consulting company, took the year off, while Spencer has his own marketing firm and was able to work virtually. At first the family planned to just take off and keep going until the year was through. But as they talked it through, they decided it would be better to do a series of trips, returning home to recharge for two or three weeks and continue schooling before taking off again for another destination. Their nanny, Paige Whitson, formerly Niles’ preschool teacher, accompanied them as well, lending a hand with the homeschooling – which, as many parents are finding these days, is a one-on-one kind of job.

“It’s interesting now because so many of our friends who were like, ‘I can’t imagine teaching my children!’ – and now all these moms are homeschooling themselves because they have to. I knew they could do it all along – and now they know.”

One thing they’ve come to realize, however, is the enormous difference between homeschooling and distance learning.

“With homeschooling, I wrote the curriculum,” she said, whereas with distance learning, parents serve more as substitute teachers instead of the real teacher.

But the biggest difference, obviously, was that their classroom – instead of being their living room – was the world. And as is often the case with hands-on learning, the most important lessons are not on the curriculum.

Everywhere they went, Cassie and Paige would study up in advance and shape the lessons around what they wanted to teach, often approaching the cities through culture, religion and food – “because food gets us all excited.”

When they were in Rome, they connected with the Gregorian University and had a priest in training – from Houston – serve as their guide, taking them to religious sites and explaining their significance. 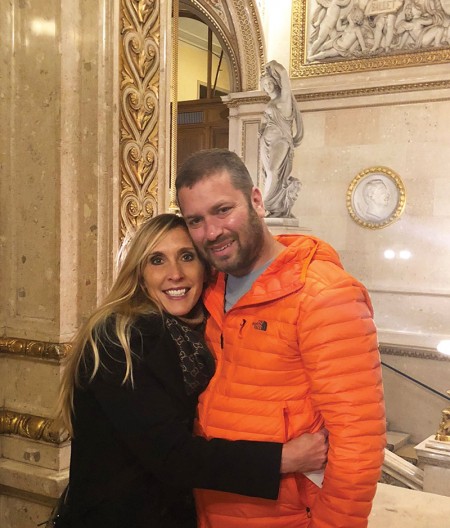 Date night for Cassie and Spencer Neumann in Austria at the Vienna State Opera.

Many days began with morning excursions, followed by four hours of study, with the lesson based on the excursion. They used the Duolingo learning app to study basic language skills for each of the countries they were visiting. Noah worked online with teachers back in Houston to supplement his material.

“Sometimes the most amazing things would happen,” said Cassie. “Like one time he was on the computer with other classmates and he said, ‘Look where I am!’ and he was standing at the Taj Mahal – or, ‘What’s that sound? – That’s the call to prayer.’”

Spencer was always in charge of the itineraries. “He would just instinctively know what we should see, what foods to try, what not to miss, etc.,” said Cassie. “He would book hotels and tour guides, and plan out our days. He kept us moving, but always built in time for school and a good night’s sleep.”

“My dad should’ve been a travel agent,” added Nelson.

Many places left their mark on the kids. They trekked through 13 countries and 26 cities with a lineup spanning the range of human existence. In Europe they visited Austria and Amsterdam, France and Spain, Portugal, Italy and Ireland. In Asia they spent time in India and Nepal, and in the Middle East they explored Egypt, Israel, the Gulf States of Dubai and Abu Dhabi; in Africa, they explored the souks and the beaches of Morocco. The journey taught them about the wisdom and history of world religions from Catholicism to Islam to Sikhism to Hinduism to Judaism, and it taught them a lot about themselves, as well.

“As parents we wanted to teach them that the world is bigger than just what we see every day, and that we are blessed to have so much – and that there are people who really don’t have so much,” said Cassie. “And that maybe having the latest Nikes isn’t the most important thing.”

This lesson was brought home to them in full force in Mumbai, where they took a tour through Dharavi, the world’s third-largest slum, where Slumdog Millionaire was filmed – led by a resident of the slum. The hive of humanity was marked by dirt floors, flimsy dwellings and, in many cases, a lack of running water.

“We loved our tour guide, who was amazing,” said Cassie. “And at the end of the tour I said, ‘With all due respect, you seem educated and you’re very eloquent and you have a skill – do you realize you could leave and go outside and be successful?’ But he was like, ‘Why would I leave? I love this place – this is our town.’”

Cassie describes walking into a hut and seeing people squatting on the floor making luggage, handing pieces to each other in a sort of prehistoric assembly line. “And he would say, ‘You’d be surprised what brand names get put on this luggage, and it gets shipped to America.’”

“It was the most shocking place, and the one where I learned the most,” said Noah, now 13. “It was more about realizing what you have… and then, when we’re going through the slums and seeing this infrastructure and seeing these people who have nothing but are living happily like they have everything – they have a great life!”

One of the most spectacular memories is of the ancient Hindu festival of Holi, when people throw colored powder into the air. Everywhere they went, people were having parties, and families would spot the Neumanns and invite them to come throw colors with them.

“It was the first day of summer in India, and something that stood out to me is that the people wanted to know more about us; they were very curious,” recalled Noah. “Mom said it’s because we’re of a different color.”

The boys were shocked to learn about the ancient caste system, and while discrimination based on caste was outlawed in 1950, it is far from a thing of the past.

Another India memory was the day they volunteered at a Sikh temple that served a daily meal to 10,000 people, and then sat down to eat with them.

The most jarring aspect of that particular journey was that after India and Nepal they flew to Dubai, which provided a shockingly stark contrast to the poverty of millions that they had just left behind.

“It was crazy to see,” said Noah. “It was just too much; there were gold vending machines where you could go and get gold. And we’re on the side of the street calling an Uber, and they’d ask – ‘Do you want a car or a helicopter?’

“It was weird going from poor to rich like that,” he added. “If I were to come from Houston to Dubai I might have thought about it differently. But I kept having flashbacks on Mumbai and seeing what these people had, and that made it feel different. And in Nepal – we were laying in bed and the whole entire power circuit would go out every three hours.” 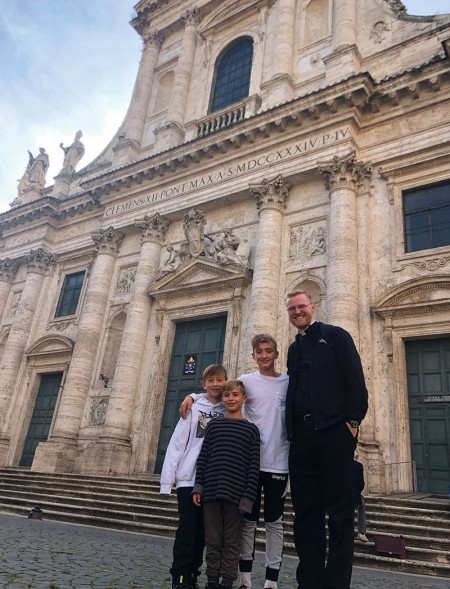 OLD WORLD CHARM Noah, Nelson and Niles Neumann with their tour guide, a Texan studying at Gregorian University in Rome; date night for Cassie and Spencer Neumann in Austria at the Vienna State Opera.

Nelson, 11, agreed. “It’s kind of like, you have too much at home, so you feel guilty – and they have nothing. You feel like you’re so spoiled, so privileged … you come back not running the water, trying not to waste so much. When I came home, I was changed.”

A hands-on lesson in archaeology came in Egypt when they went to the Karnak Temple Complex near Luxor, and were allowed to enter a tomb that had not yet been released to the public – and they had the place to themselves.

In Morocco they did the typical tourist things – charmed a rattlesnake, rode a camel, wandered the ancient souks – but the country won their hearts with its friendliness and color and vibrancy. In Austria, they took in the grandness of the Vienna State Opera and studied the rise of the Third Reich in the place where it happened. In Amsterdam they were amazed to see the sea of bicycles overtaking the traffic. Seeing the Great Pyramids and King Tut’s Tomb in Egypt was unforgettable as well. They loved the Middle East so much that they have begun studying Arabic as a family.

The lessons were profound and were too many to count, but Spencer and Cassie each summarized it in their own way. As they planned their next trip – Turkey, Ethiopia and Rwanda, with a possible return to Morocco — they contemplated perhaps the most important one that their year on the road taught them.

“When we were writing home, people were very worried about us all the time, just because we weren’t taking the usual seaside vacation,” said Cassie. “We were really pushing the boundaries – and we’ve only just begun.”

“Don’t let anyone fool you; the people of the world are amazing people, and as wonderful as they can be,” summarized Spencer. “And don’t be scared to go see the world. It’s truly a friendly planet.”