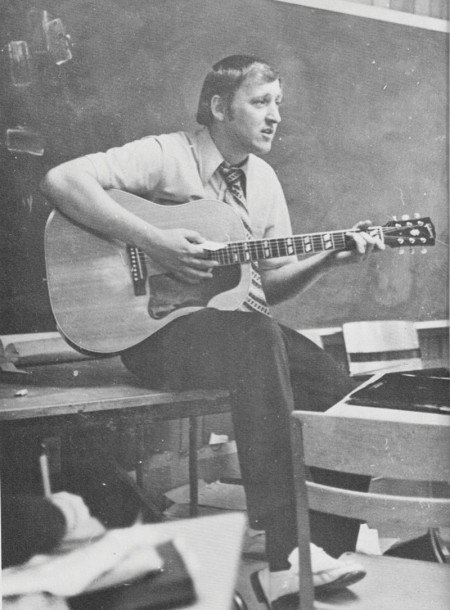 FROM SHAKESPEARE TO BOB DYLAN Forgive the white shoes. It was 1973. The senior class honored Bobby Ezell by dedicating the yearbook to their beloved teacher. (Courtesy of Aldine High School 1972-73 Roundup Yearbook)

I’m sorry it took me so long to grade this, Cindy,” said Mr. Ezell, as he handed over a poem I had written 20 years earlier. It appeared from a stack of papers he thumbed through as former students approached. It was the Aldine High School 20th-year reunion, and Mr. Ezell was a major draw.

In the early 1970s, Aldine was a blue-collar, mostly white school made up of kids who took shop, ag and cosmetology. Future Farmers of America defined the culture until suburban neighborhoods like Inwood and Inverness Forest emerged, the “rich kids” in that unreal reality.

I was an Inwood girl, along with Sharon, Debbie, Julie, Mary, Shirley, April and token boy Blair. Our common bond was that we were transplanted into a new instant suburban community in our tweens. Our friendships developed on the long bus ride to school.

We learned a lot on that bus ride that started in the eighth grade at Stovall Junior High. We put on parent-forbidden make-up, kissed our first boys and tried our first cigarettes.

You were either a surfer or a kicker at Aldine. There would be lunchroom stand-offs and parking-lot brawls. But we collectively turned into lambs in Mr. Ezell’s English class, our oasis.  We dumped our teenage emotions at the door, freed to ease into Mr. Ezell’s world of words. They ranged from Shakesphere to Dylan. Yes, Bob Dylan. The words arrived into that classroom as if they had been on a long journey from deep inside Mr. Ezell’s soul. “Ah, but I was so much older then, I’m younger than that now” is a Dylan line I am only young enough now to understand.

Mr. Ezell seemed to give the same attention and weight of importance to our words as well. He read them out loud with no less reverence.

About halfway through the year, he discovered a tall, cartoonish throne abandoned by the drama department. It became a permanent set piece in his classroom. He would move into it for a while, then back to his desk.

It is now 50 years since we first met. Earlier this year, as if no time had passed, Mr. Ezell posted a comment on my Facebook page about something I had written for The Buzz Magazines.

“I am better for having read your words…. So impressed at the good person you grew to become.” – Bobby Ezell.

Wanting more where that came from, I found him, now Dr. Ezell, in his comfortable Conroe home. Here, he lives retired after 47 years, along with Patricia, his fellow English-teacher wife of 46 years, surrounded by pictures of travel, children and grandchildren.

His study holds cherished notes from students, things they have written and miscellaneous  mementos. Some trophies were also scattered around. Most, he dismissed, but a couple, he said were important to him.

In 1991 he received the Texas Excellence Award for Outstanding High School Teachers from The University of Texas alumni association. He didn’t go to UT. His doctorate came from A&M. “They gave me a thousand dollars and a computer. That was a big deal for me then,” he said. Patricia said the computer turned into a bit of an Aggie joke. He had not yet transitioned from his manual typewriter.

The other award came in his final role as a tenured professor in the Sam Houston State University Department of Education, where in 2009, he received the Outstanding Teacher award from among a faculty of about 100. I’m happy to think that thousands of teachers today encountered Dr. Ezell between 2004 and 2012.

One of my classmates at Aldine, Janet Jones Spradling, benefited from a curriculum he created for aspiring teachers. Seniors were allowed to spend half of their day working in elementary-classroom settings. Janet said it confirmed her childhood desire to teach.

She retired in December after 42 years of teaching. Once again, upon her retirement, a rare post emerged from Bobby Ezell on her Facebook page.

“I’ll share with you a thought that I have about teaching. Teaching is about creating good. I know that word ‘good’ is vague, but we all have a feel regarding what it’s about. Good is about making a child’s life better, it is about making a child believe they can do something that they didn’t know they could do, good is a potential you create inside a young person.”

My high school best friend, Sharon Trojan Hollinger, is amazingly self-effacing despite her lifelong career as a television director in Los Angeles. She always thinks of a line Mr. Ezell told her: “Pride is the opposite of love.” He said it’s a recurring theme in Greek literature.

He uses the world “learned” where most people would use “decided.” He said he became a much “better” teacher after those early years with us. But he “learned” from us that he would teach for the rest of his life.

“A teacher is always learning,” he would tell his Sam Houston students. He learned that “a teacher can be a magician.”

We will talk more about that next month. See you in September.