The View of a Lifetime: Look Up to See NEOWISE Comet 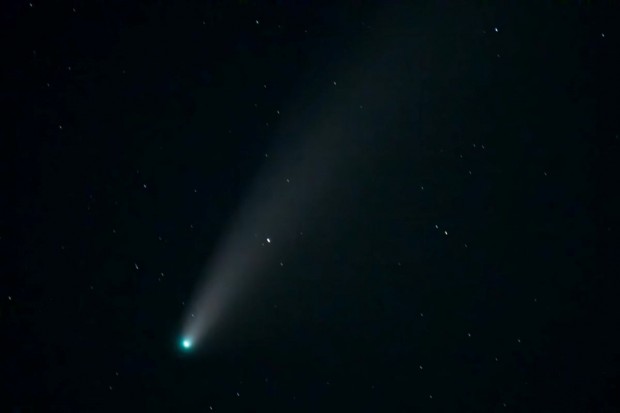 Comet NEOWISE is shining bright in the northwest sky amongst thousands of other stars made visible by the less-polluted air. (Photo: Ben Cowan,

If you don’t pay any more attention to the stars than knowing your zodiac sign, you could be missing out on a really cool event. Through the end of July, a recently-discovered comet named NEOWISE is passing by Earth in its long orbit around the sun.

What’s unique about NEOWISE is that it is so close and so bright that it can actually be seen with the naked eye. If you can escape the light pollution of the city and point your gaze to the northwest sky after sunset, you will see this icy space rock dazzling in the sky. No telescope is necessary, although a good pair of binoculars or a camera with a long zoom lens will give you an even better look. But you better get a look at it soon - its orbit is so large that it only passes through our solar system once every 6,800 years. That’s why scientists only recently discovered its existence.

When my family learned about this once-in-a-lifetime event, we decided it would make for a great, Covid-safe night out, so we hopped in the car on the night of July 18 and drove about an hour west of Houston to get the best view. We pulled off highway I-10 and found a quiet dirt road in the countryside near Sealy, where there is less light pollution to obscure the view of the comet.

Since the comet is in the northwest sky, we chose to head west so that we would not be looking into the lights of Houston but driving north past the Woodlands would work as well. About an hour after sunset, the darkness settled in and the comet became visible. We downloaded a free app called Sky Safari to help us locate the comet. We pointed our binoculars at the spot where the app said the comet would be and there it was. Comet NEOWISE in all its glory was shining bright for us to see. It looked like a bright blurry star with a bluish hue and a long, shimmering tail. The multitude of stars visible in the dark, country sky around it were just as gorgeous.

Although NEOWISE is traveling at 144,000 miles per hour, about twice as fast as the Earth is traveling around the sun, it moves almost imperceptibly through the sky, so you can spend as long as you want watching, admiring, and taking photographs like my dad did. We spent a couple hours enjoying the peace, quiet, and relatively cool night air far out in the country. It was a great escape from a city in the grip of a pandemic and experiencing this together made for a great family bonding activity.