When your students include your kids 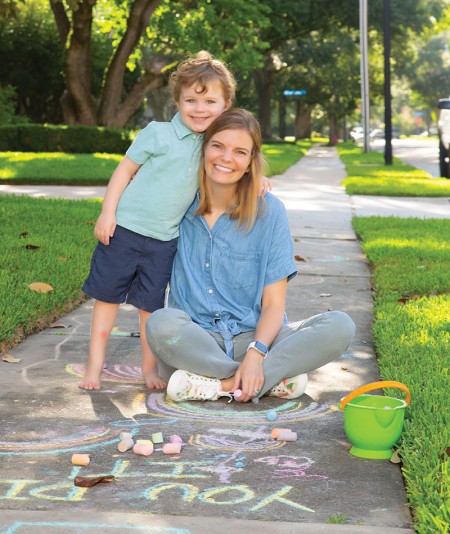 The first time Ashley Moseley tried to institute “quiet time” with her two children, her 5-year-old daughter chopped off her own hair. Another time, her 3-year-old son bolted out the front door in his underwear.

“It was pure chaos,” Ashley admits as she looks back on the spring semester, when the coronavirus pandemic upended lives and forced schools worldwide to shift to distance learning. “There was always something. The haircut or a runner…”

Ashley, 33, teaches kindergarten through fourth-grade art at River Oaks Baptist School. Her kids, Alice and James, are usually in school or daycare while Ashley is in the classroom. But beginning in mid-March, going to school became a public health threat, and both Ashley and her children were stuck at home.

Ashley thought she’d be back in the classroom by May. May rolled into summer, and then fall. Today, nobody knows how long it will be until schools are back to normal. This semester, most Houston schools have begun classes online, or, as in the case of ROBS, in a hybrid format. Plexiglass dividers separate desks, face masks are required, and only half of lower and middle school students are allowed on campus at a time to reduce crowding. Ashley is continuing to teach art through recorded lessons while also assisting in classrooms. 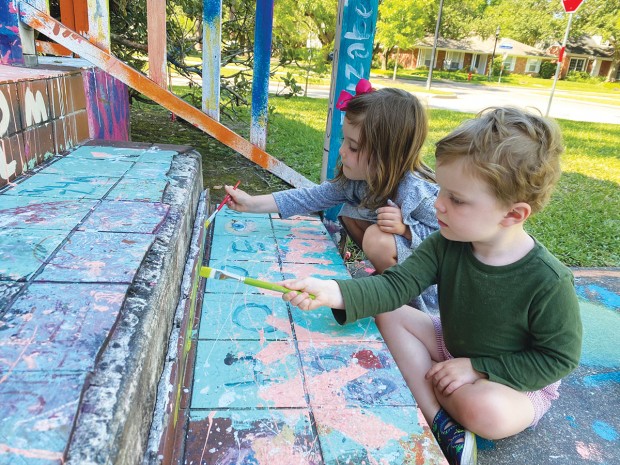 Siblings Alice and James Moseley paint on “The Art House,” a home in West University that families were invited to paint on this year prior to demolition. (Photo: Ashley Moseley)

Ashley, upbeat and with a bright smile, doesn’t hesitate to share that she’s had some breakdowns over the past few months. There were moments when she wondered how she could possibly get up the following day and do the whole thing all over again – waking up at 6 a.m. and finding ways to deliver a meaningful art curriculum online while also entertaining her energized children all day on her own. Ashley’s husband, Seth, is an anesthesiologist and is working on the frontlines of the pandemic. He recently started a second job at a new hospital in Cypress.

Now, Ashley laughs as she recounts the time son James escaped from the house and ran down the street wearing nothing but his underwear. Or the times daughter Alice was playing in the background of her teaching videos that hundreds of students and parents would watch. In the midst of this madness, Ashley discovered how to give herself grace.

“I think self-care is so important,” she says. “Set up what you need to set up in order to do your top priorities, and then let everything else go. With teaching, that meant having my kids watch a show while I was in a meeting. It meant allowing myself not to record a video five times. If there’s a mistake, you just have a mistake in there. Honestly, putting your best out there and not worrying about being perfect.” 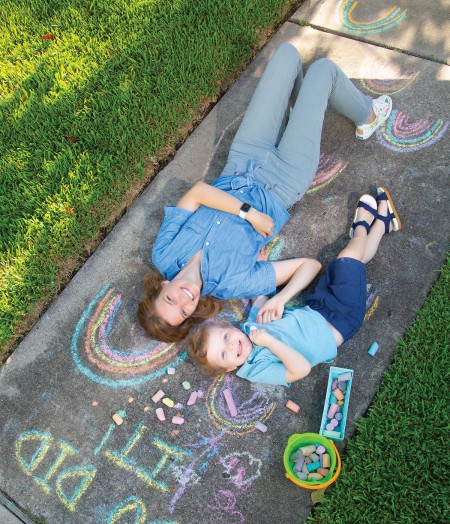 Part of what’s helping Ashley get through these strange times, she says, is her underlying love of teaching art. Ashley decided she’d become an art teacher back when she was in college at Vanderbilt University. She fell in love with the subject while taking a course on art education and then went on to get a masters in K-12 Art Education at Belmont University. She landed her first teaching job at ROBS, the same school she attended as a child.

Even though everything is upside down, there are bright spots, like the creative quarantine lessons, including one she called “spreading love by sharing your art.” Students were encouraged to hang up their art in the windows so neighbors could feel the love during evening strolls. Nature-inspired art projects motivated kids to go outside. Students made a pot by molding and baking biscuit dough in their kitchen oven.

Art class has become an escape from reality – a chance to leave behind the computer screen and Zoom lectures and to create something from imagination.

Art has become the go-to activity for Ashley’s own two kids, who normally attend Southampton Montessori School. After Ashley pre-recorded a lesson for her students, her kids did their own projects. The windows are plastered with their art. Rainbows drawn with chalk decorate the sidewalk in front, and phrases like “Houston is working together” are etched onto the driveway.

“I learned just how life-giving art can be,” Ashley says. “We are tapping into the student having an experience. Being able to have an escape is a very healthy way to gain control. To feel like they can do something even when they are isolated – letting kids lead in their creativity.” 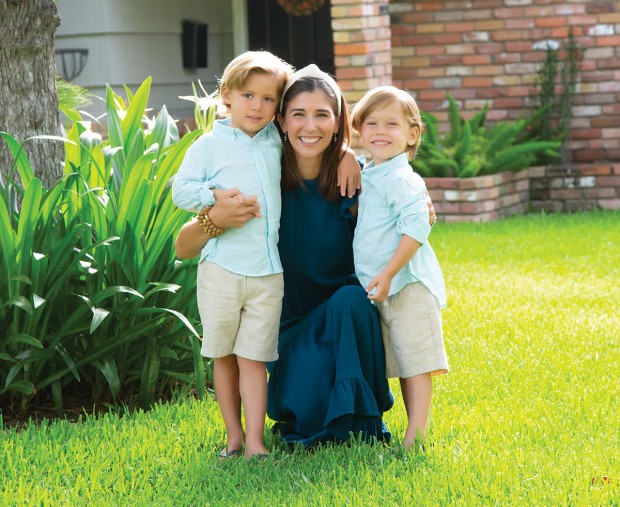 Casey Croley, who teaches at Presbyterian School, is balancing teaching during a pandemic with parenting her two little ones, Henry and August. (Photo: lawellphoto.com)

In Bellaire, mom and teacher Casey Croley realized that teaching prekindergartners how to use Zoom was one thing; doing so while simultaneously entertaining two rambunctious boys was quite another.

At St. Michael Catholic School, where Casey was teaching pre-K last school year, quarantine classes were a combination of pre-recorded lessons and live Zoom meetings. Casey recalls the first few weeks of online teaching as overwhelming, as she learned to balance teaching while engaging sons Henry, 5, and August, 3. While Casey’s husband, Anthony, was working from home, his job soon required him to travel, so Casey was sometimes managing on her own.

Casey started out by setting a detailed routine for her kids. “I had this whole printed-out schedule, and every day we’d talk about what we’re going to do. We’d start with our little morning meeting and read a book.”

But the routine only worked for a week. Casey quickly realized that, on some days, her kids were bursting with energy, and getting them to sit down and read a book first thing in the morning was nearly impossible. A more useful morning activity on those days was going on a bike ride. Other days, the weather prohibited outdoor activities, or the kids were more settled, and morning physical activity was not necessary. 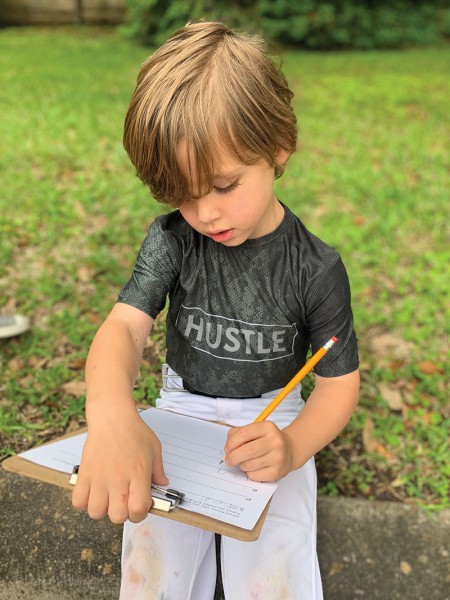 “I realized really quickly that school doesn’t translate to the house,” said Casey, who is now teaching kindergarten at Presbyterian School. “Learning can look like all different kinds of things. You can use opportunities from real life. If you’re having a day when you’re struggling to teach numbers, you can say, hey, let’s bake some chocolate chip cookies and use measuring as the math lesson that day. Or go on a nature walk and look at the license plates as you walk by the cars and see if the kids can ID the numbers.”

As Casey reflects on distance learning, the challenges are obvious. Early-childhood education is usually hands-on, and beyond academics, school teaches children social skills. On Zoom, kids struggle to understand that they can’t talk over each other on the platform, and they don’t get the same interaction with peers. “Not only did they not understand that they couldn’t randomly start talking, but they have siblings in the background and all kinds of stuff going on.”

Despite the challenges, it’s also apparent that her kids and students learned quite a bit. Henry learned how to ride his bike without training wheels, for instance. August’s vocabulary skyrocketed as he was spending more time with his older brother. Many students developed strong relationships with parents or other family members.

“A lot of times we worry so much, but they are going to be okay,” says Casey. “Kids are resilient.”

It is undeniable that teaching classes online is far from ideal. For Clay Guinn’s 11th- and 12th-grade English classes at St. John’s School, a sense of connection and flow was getting lost through Zoom, the platform Clay used to teach his students. (Teachers are continuing to use Zoom at St. John’s, which postponed in-person learning to Sept. 8, contingent upon improved coronavirus situations in Houston.) 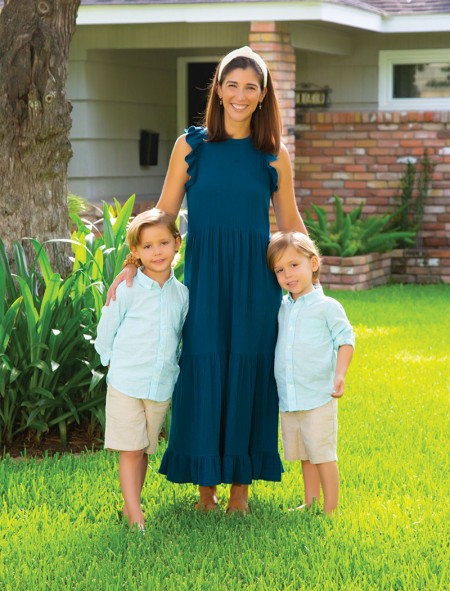 As a mother and a teacher, Casey Croley has been juggling online teaching with outdoor activities that engage sons Henry and August. (Photo: lawellphoto.com)

“What I love about being an English teacher is that at the beginning of the class I know we’re going to talk about a book, but I don’t know where it's going to go,” said Clay, who is balancing teaching with parenting his two elementary school-aged daughters.

On Zoom, Clay explained, some spontaneity is lost. Students are usually muted during class and must be called on to talk. Unlike a classroom, where Clay can sense from a student’s body language if they have a thought they’d like to share, on Zoom they are relegated to tiny squares.

At the same time, Clay has found some unexpected boons to online teaching. One key learning is the value of online discussion boards, where students could post responses to questions and interact with their classmates. Clay was skeptical about them at first, but students had fun engaging with literature that way.

“I think when we’re back full-time, I’m going to figure out how to use them again because I like having students write low-stakes stuff as an English teacher,” says Clay.

In a similar vein, Ashley says she plans to give more open-ended art projects to her students, as she has discovered the value in letting kids lead their own projects.

And Casey will bring more real-life lessons to her classroom, engaging kids in a way that they don’t even realize they are learning.

Ironically, a new sense of community may be fostered through online learning, one that might even bring students and teachers closer than they have been in person.

Ashley says parents who live in the neighborhood walk or drive by her house and ask about her kids – they know them now from the at-home videos. Casey has empathized and grown closer with parents struggling to juggle it all. Clay says online learning offers a reminder that teachers are humans, too.

“It became intimate really quickly,” says Clay. “At the same time as it got more distanced, it was like ‘oh, I know what your house looks like now…’ When my kid walks in and she still has bedhead, my students see me as human. They don’t expect me to be something else.”