Our Own VING Teen: GiVING Back 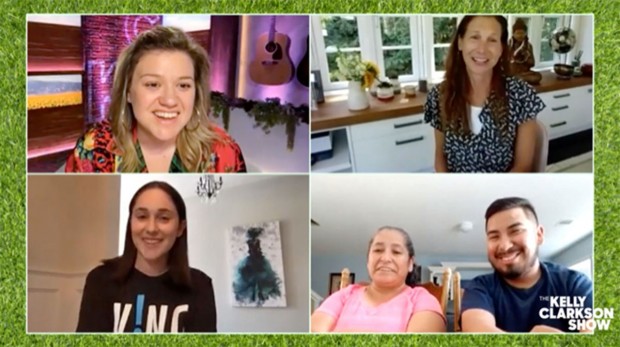 When 16 year old Lindsay Frankfort of Braes Heights was shut in like the rest of us, she did something that not even her parents were aware of - a random act of kindness that would get national attention and land her on The Kelly Clarkson Show.

The St. John’s School junior admits she was doing what so many other teens have done with their pandemic-induced boredom …scrolling through social media. But she came across an ad for a non-profit organization called V!NG that encourages teens to nominating someone deserving of $1,000.

“At first I was thinking it was a scam and too good to be true,” said Lindsay. “Who gives a teen $1,000? But I checked out the website and I decided to submit a simple one-minute video saying who I wanted to nominate.”

Lindsay nominated Maria Rivera, a woman who has been cleaning the Frankfort family home for almost a decade. A week after submitting her video, Lindsay found out it was picked not only for a $1,000 gift but also a spotlight interview on The Kelly Clarkson Show. Monday’s pre-recorded episode features the segment where Lindsay surprises Maria with the check.

“To us, she is more than just the lady that comes and cleans our houses. She’s always smiling and has such a positive light and energy. She would always leave me and my sister these sweet and funny notes around our rooms and on our family white board. She makes such an impact on our family that I wanted to make a big impact on hers.”

V!NG is a platform that wants to give a voice to teens. The name comes from the last syllables in words like giving, loving, receiving and believing. The organization hopes to empower teens to think outside of themselves and pave the way for a new generation of givers.

“I’ve had a lot of good fortune in my life and I’m just appreciative of it all. In quarantine, everyone has had time to reflect on how important family is and all the things we may have taken for granted,” said Lindsay. “Then when my mom was making us clean our rooms, I thought about Maria and I knew she was going to be affected by Covid …she has kids and has a job that doesn’t pay for healthcare.”

The calls and messages have flooded the Frankfort family especially from many Braes Heights neighbors who also used Maria’s cleaning services before the pandemic.

“Lindsay showed a lot of initiative and kindness to prepare and submit a video, and she showed so much poise and compassion on the show,” said mom Michelle Frankfort. “We are so proud.”

And the giving didn’t stop with Lindsay. Singer/songwriter and TV personality Kelly Clarkson threw in another $5,000 for the Rivera family.

“It was a huge surprise for all of us. Maria started crying. It was incredible,” said Lindsay.

Lindsay has been appointed a New Teen Ambassador for the V!NG Project, which includes answering questions on the organization’s social media platforms, but mostly planting the seeds of a movement inspiring giving teens - something Lindsay says has already taken root.

“This has really changed my whole outlook on everything and made me feel like I can make a difference. And that I have a voice and I can use it. My age isn’t something holding me back. I can start now to better the world… it’s been very eye opening."