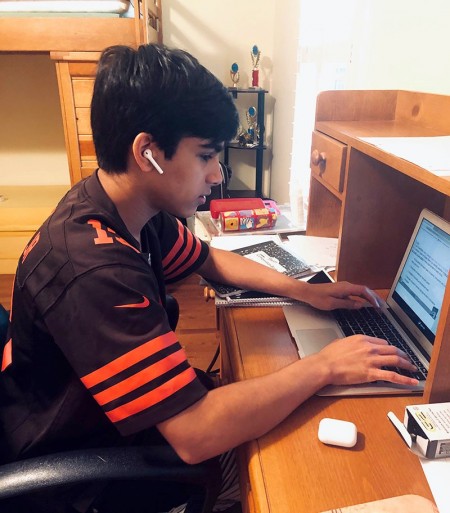 No driving to school. No anxiously sitting in advocacy. No frantically searching for the right room number, and no sighing in relief while sitting down right as the bell rings.

This school year, hundreds of Bellaire High School ninth-graders logged on to their first day of classes as newly-minted Cardinals. In a normal year, they would have been plunged headfirst into the noise and controlled chaos that fill Bellaire’s labyrinthine halls. Instead, they were greeted by silent “classrooms” and a constantly crashing website that was supposed to be their virtual ticket to their first day of high school.

For students like Krishiv Masand, who finished his eight grade year at T.H. Rogers online, starting at virtual Bellaire did not feel all that different from the last few months of middle school. “At first it was weird because the switch from Google Classroom was kind of jarring, but we used [Microsoft] Teams at Rogers so that wasn’t as hard,” he said, referring to the change made by HISD schools from the user-friendly Google Teams platform to the HUB, the less-popular district platform. When asked about how real the middle-to-high school transition felt, Krishiv added, “I don’t think I’m getting a high school experience just yet,” however, “there is more homework and more responsibility.”

By beginning high school in a virtual setting, many students like Krishiv have yet to experience the unnerving sense of change that accompanies freshman year. Rather than adjusting to a new building and new people, ninth-graders are just clicking on new links on new websites.

Thankfully, Bellaire administration was able to create a sense of normalcy for incoming students with virtual orientation events like Cardinal Camp, an upperclassmen-led program that helps ninth-graders navigate Bellaire physically, socially, and academically before the school year begins. Cardinal Camp still proved to be a valuable event even without the tours and in-person social interaction. “It was really helpful,” said Krishiv, who emphasized how valuable it was to be connected with upperclassmen. “My Cardinal Crew leaders gave us a Remind group to join if we had any questions.”

Just the ability to send a simple Remind message and the opportunity to put a face to the elusive Bellaire community was enough to make orientation a small victory for admin and students alike. This success story lends truth to the words of administrators who have touted Bellaire's ability to serve students in a pandemic; even without a building, the Bellaire experience lives within its students and the community they have created.

Unfortunately, Cardinal Camp was merely a respite from the virtual chaos that was Krishiv’s first week at Bellaire. Having been placed in the wrong classes and enrolled in two first periods, nobody would blame him for being unenthusiastic about being a Cardinal. But he maintained a calm attitude: “Some things are a mess, but I’m liking it so far” - a surprisingly positive takeaway from what is likely to have been the rockiest week of the entire school year.