From stingray prey to trout victor 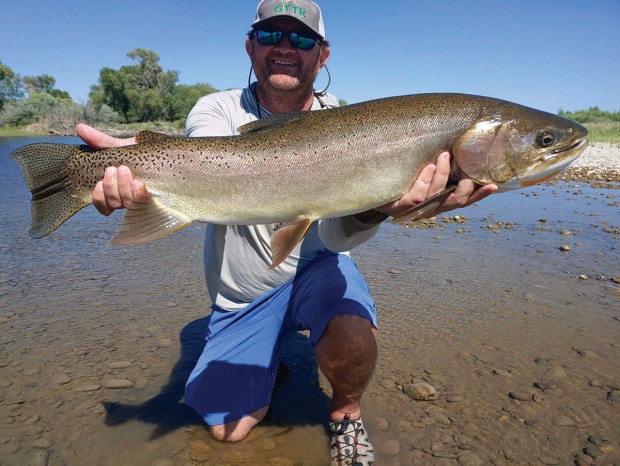 The water is always calling Sam Hix. It calls when he’s crunching numbers as a tax partner at Deloitte in Houston or at home raising three kids with wife Nicole. Fishing is in Sam’s blood and has been ever since he was little.

He fishes off his 25-foot ShearWater boat at his bay house in Tiki Island, and since high school, he has helped a friend’s dad crew a shrimp boat at the opening of every season.

But five years ago, he tried a new kind of fishing – fly fishing – and was hooked.

“It’s the only thing I've ever done that can really draw all my attention and focus,” said Sam. “I don't think about anything else except the fly fishing.”

In fly fishing, delicate flies are made to look like real insects. The fly is cast using a long, thin, flexible rod, reel and weighted lines. Fly fishing takes practice and patience to become skilled. Sam often practices out on the lawn.

What happened in August, on the last day of his annual four-day fishing trip with friends on Idaho’s Snake River, is one for the record books – literally.

Sam and friends Brandon Bingham, Kevin Reed and David Smith were with guides from the Lodge at Palisades Creek, a fly-fishing lodge located at the banks of the South Fork of the Snake River in Irwin, Idaho.

Sam caught a Yellowstone cutthroat trout (a freshwater fish in the salmon family) with a girth measuring 15 inches at its widest point and a tail span of eight inches from tip to tip. It later was confirmed by the Idaho Fish and Game department to be 30.5 inches long, setting a new catch-and-release state record.

Sam described reeling the trout in as “pandemonium.” There’s already some disagreement as to how long it took, somewhere around 10-20 minutes. “It was like winning the Super Bowl. We were all high-fiving and pretty excited,” he said. But at the same time, they took care for the fish, who was out of the water only long enough to be measured and photographed.

Sam gives all the credit to guides Josh Heileson and Jason Pruett. “When I was finally able to get the fish in, I was shaking because it was such a big fish. Some of those guides have been fishing the area their whole life, and that's one of the biggest fish they’ve ever seen. It was really an unbelievable, unique, lifetime fishing experience.”

What makes this prize catch even sweeter for Sam is that it was his first time back in the water since April. He was wade fishing in the West Bay of Galveston when something in the murky water below attacked, piercing his rubber wading boots.

Sam felt instant and intense pain, “like a hot iron sticking through your heel.” He couldn’t even swim back to his boat, which was only 25 yards away. His friend pulled him in and pulled off his boot. There was a lot of blood and a hole through the back of his ankle just centimeters from his Achilles tendon. Doctors say Sam was likely barbed by the venomous spine of a large stingray.

Nicole Hix was home helping their kids navigate remote learning while teaching AP World History at St. Agnes Academy. “It was terrifying,” said Nicole. “I got this call saying, ‘Hey, I just dropped Sam off at the ER. They won’t let me in.’”

She and the kids unplugged and hurried down to Galveston. To her surprise, Sam was released, but Nicole was convinced the wound didn’t look right.

“It was the nastiest thing you had ever seen. You couldn’t even see his toes because it was so swollen,” said Nicole, who insisted Sam go to an emergency room at a Houston hospital. “This time, doctors said you’re not leaving. They said it was a ticking time bomb if he didn’t have surgery right away.”

Adding to the anxiety was being in a hospital in April, when so little was known about Covid-19. Nicole describes it as one of the worst experiences of her life. And this family is no stranger to unlucky events. They flooded during Harvey, and last year the whole family had to get rabies shots after a small colony of bats moved into their home.

Sam ended up in a cast and couldn’t walk for two months, but other than some nerve damage, the foot is healing well.

He’s got a new nickname now, “Old Salt,” a term for experienced mariners who have lived to tell stories about their adventures – and redemption on the Snake River.