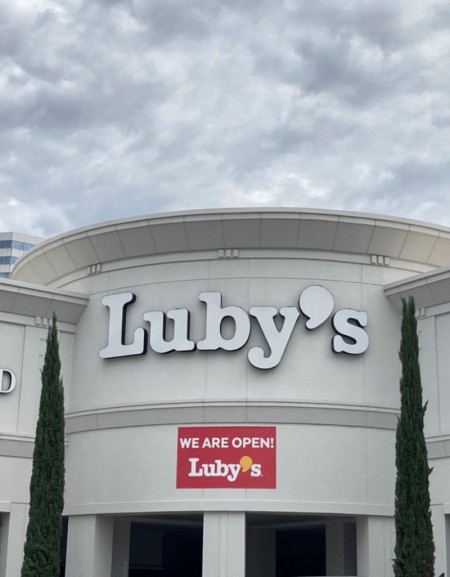 It's a sign of the times: Earlier this month, Luby's announced their financial troubles, leaving many Luby's lovers in fear that the legendary cafeteria would close. Signs like this one help to spread the word that Luby's is indeed still open at dozens of locations across the state.

Like many restaurants lately, the Luby’s cafeteria chain, headquartered in Houston, has been struggling financially. The company recently announced it was putting its business and assets up for sale to attempt to pay off a debt of $35 million. Luby’s, which was first founded in 1947 in San Antonio, said it would keep some of its locations open while looking for a buyer, but the future seemed bleak to Luby’s fans.

But hold on to your hairnets, folks. Just when Luby’s fans across the Lone Star State were getting ready to drown their carrot raisin salad in tears, the next day, COO Todd Coutee shared a reassuring message on Luby’s website. Coutee confirmed that 80 Luby’s and Fuddruckers locations are open for dine in or to-go. Yee-haw! Long live comfort food galore from perfectly square-shaped pieces of fried fish to icebox pies.

The announcement spurred some Buzz neighbors to reminisce and share memories from Luby’s over the years.

Victoria Sheffield said she absolutely loves Luby’s and has a very special memory of dining there on her wedding day in 1993. Victoria said, “The build-up to a wedding is fraught with stress and joy in equal parts. We had our rehearsal dinner the night before, and my younger brother, Brian Sheppard, spent the night at my apartment afterward. Waking late the next day, we talked about how to fill the time before dressing and heading to the church. 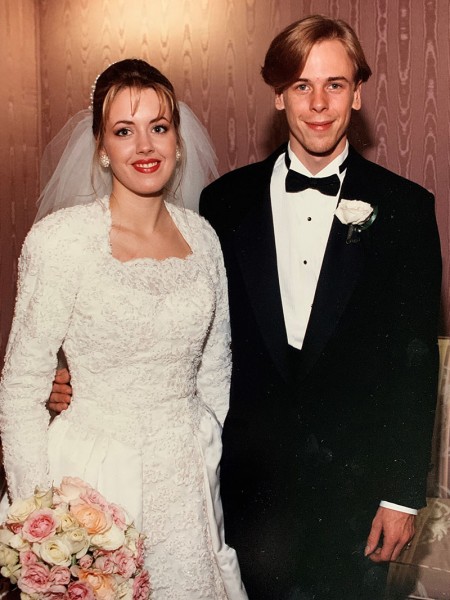 One of Victoria Sheppard Sheffield's special memories from her 1993 wedding day was eating a relaxed lunch at Luby's with one of her favorite people, her brother, Brian Sheppard. Luckily, their happy bellies could still fit into their dress and tux for the fancy festivities a few hours later.

Brian and I ended up dining together at the Luby’s on Buffalo Speedway in West U (at Bissonnet where the Buffalo HEB now stands). The fried fish, pinto beans and mac and cheese provided the perfect comfort and sustenance before the big event! I’ll never forget that special wedding day lunch with my little brother 27 years ago.”

Lynn McCarley, Suzanne Shelby and Sheryl Moore remember back when their West University United Methodist Church’s young married couples Sunday school class, Cornerstone, was just beginning in the late ’90s. Their group would head over to the Buffalo Speedway Luby’s after church. At the time, Magregor McCarley was the only little one in tow.

Suzanne shared, “I remember we had fun taking turns pushing Magregor through the food line in those giant pleather high chairs on wheels.”

Magregor’s mom, Lynn, added, “Magregor always loved riding in those high chairs. Sometimes Luby’s would tie a helium balloon to the high chair so that always kept the kids entertained. As the parents of little ones, it was always nice to get a bit of a break. When Magregor and his little brother, Grayson, got older, they liked picking out whatever entree they wanted. The rule was that they had to have at least one green thing on their plate. There was always the anticipated excitement of what color of cubed Jello they would choose. And a rite of passage was when you were old enough to carry your own tray and the cashier didn’t have to ding the bell for someone to come help carry it to the table.” Magregor and Grayson are now in college as are dozens of other sons and daughters that blessed those couples over the years. 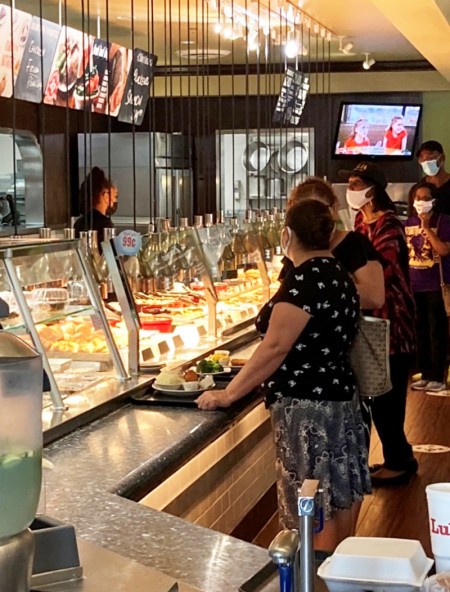 Masked up, lined up and ready to dish up some great Luby's food. It's always a tough decision with so many tempting choices.

Sheryl said that when she thinks of Luby’s, she thinks of friendships. Frequently, their family would join friends and their kids for an easy, tasty lunch after church. “We’d have all of the wheeled high chairs lined up, and LuAnn platters ruled the day.”

A favorite memory is when a new family joined the group one Sunday. “Our daughter was around 2 1/2, and their son was 1. They looked at our daughter using a fork and spoon and eating relatively neatly. The mom remarked, ‘I don’t think my son will ever be able to use utensils like that!’. We are still great friends with that family and our kids are in their 20s now. It’s funny to think about the concerns we had back in the days.” (Note: Yes, the 1-year-old eventually learned how to use utensils. Putting them in the dishwasher is another matter.)

In addition to enjoying trips to Luby’s with church friends, Suzanne also has fond recollections of growing up in Eagle Lake and the excitement of going to a restaurant in the big city. “Luby’s was a treat when we had to go into Houston for different things. When the one we went to had a long line, it would wind out into the atrium garden in the lobby. My dad always got the liver and onions. Always the LuAnn platter for me and, every so often, Dad would let us get dessert. The cheesecake was the bomb!” Suzanne continued, “I also thought it was neat that there was always a nice lady to help me take my tray to the table. I thought that was special treatment. Little did I know they were trying to keep kids from dropping their trays and making a mess!”

Luby’s super fan, Julee Patterson, said, “We ate there every Sunday after church as a kid. Lots of families would go and we would push all the tables together and the kids would be at one end and the parents at the other. We did this for years! Every week I had fried chicken, mashed potatoes, green beans and a roll. And often a slice of chocolate pie.” 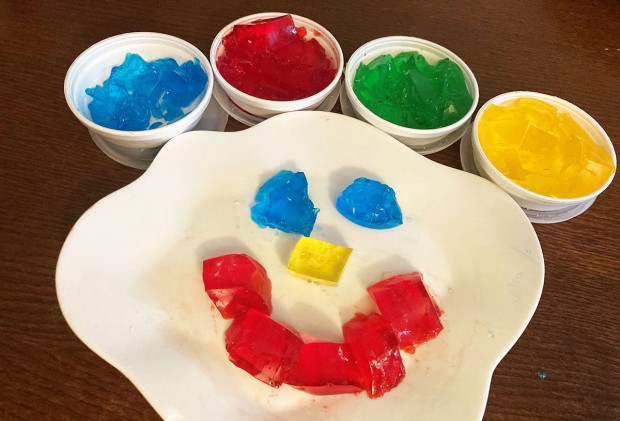 Hello, Jello! Over the years, Luby's colorful selection of Jell-O (and homemade whipped cream!) has put miles of smiles on patrons' faces.

Laura Elwood said she remembers many great times over a LuAnn platter. Like so many kids, her son, Richard, loved the mesmerizing rainbow display of perfectly cubed Jello, just waiting to be chosen and crowned with a dollop of whipped cream. When Laura asked why he liked the Luby’s Jello so much more than the Jello at home, he answered, “You never make it in all those colors!”

Throughout the years, Laura said she always smiles when she sees the lime green Jello salad as an option in the salad area of the food line. The dish includes pecans and pineapple and, when she was growing up, Laura’s mom made a similar version that looked just like it. (Luby’s calls it the Frosted Lime Congeal.)

If you want a taste of Luby’s at home, here are some recipes to consider: 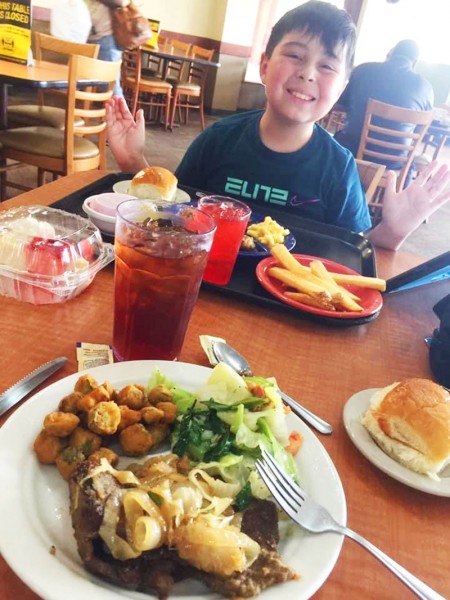 You can also get your square-shaped fried fish, homemade mac and cheese, chicken tetrazzini and broccoli rice casserole in the frozen aisles at HEB grocery stores.

Editor’s note: Share your favorite Luby’s memories with us by commenting here or emailing [email protected]. For more restaurant nostalgia, see Restaurant Memories: A look back at Houston's dining past by Russell Weil.