Finding a Fourth for the Three Amigos 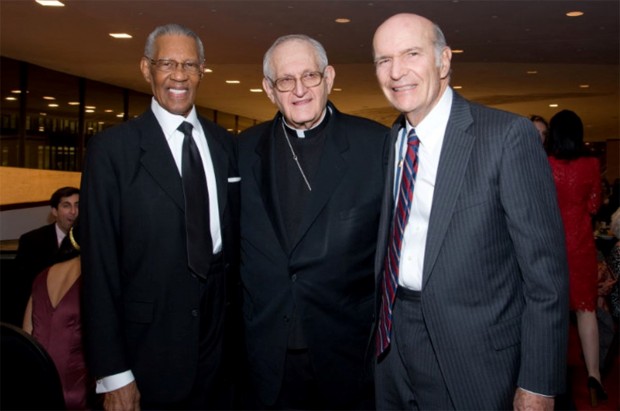 The Three Amigos is what the three religious leaders – a pastor, an archbishop and a rabbi – named themselves. Reverend William Lawson, Archbishop Joseph Fiorenza and Rabbi Karff banded together more than 50 years ago to fight for civil rights for people of all races and faiths. Dedicated to social justice reform, they worked together with other leaders to create the Harris County Public Defender’s Office and addressed all manner of issues of implicit bias and systemic racism. Just this past June, Rabbi Karff, along with his Amigos, participated in a panel led by Interfaith Ministries to celebrate Juneteenth. The threesome was an anchor for the Anti-Defamation League’s Coalition for Mutual Respect.

The bond the Three Amigos shared was deep. When Rabbi Karff’s home burned in a fire several years ago, and he lost his library, Rev. Lawson and Wheeler Avenue Baptist Church raised the funds to replace the library in its entirety. The Houston Chronicle quoted Rabbi Karff in 2013 saying that Rev. Lawson and Archbishop Fiorenza were his “soulmates.”

Last week, a new Amigo was named by Rev. Lawson and Archbishop Fiorenza. Rabbi David Lyon, the senior rabbi at Congregation Beth Israel who was mentored by Rabbi Karff, was already a partner in ADL’s Coalition for Mutual Respect. While Rev. Lawson and Archbishop Fiorenza shared that they could never replace their original third Amigo, Rabbi Karff, they did need a third partner to continue their work in Houston, and they wanted that partner to be Jewish. Rabbi Lyon was the obvious choice.

"Rabbi Karff often spoke to me about his friendship and work with Bill and Joe, as he called his friends. He would be so happy to know that their work will continue in friendships that bridge faith and age,” Rabbi Lyon wrote in a news release to members at Congregation Beth Israel. “Indeed, I will stand on Sam's shoulders to do the heavy lifting. Thank you for the honor and privilege to be an Amigo."

The original Amigos, and all of Houston, continue to mourn Rabbi Karff. But they, along with their new Amigo and ADL’s Coalition for Mutual Respect, look forward to honoring Rabbi Karff’s legacy and continuing their work to secure justice and basic human rights for all.