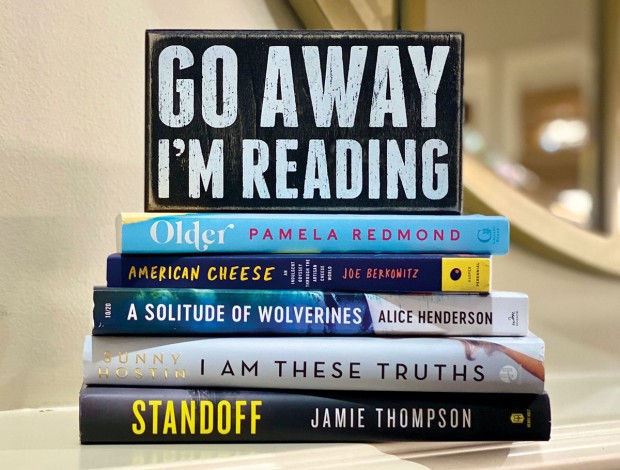 WHAT TO READ This month’s picks include a deep dive into the world of artisanal cheese, two nonfiction books about timely issues, a fast-paced thriller and a funny novel about pursuing dreams.

American Cheese: An Indulgent Odyssey Through the Artisan Cheese World by Joe Berkowitz –  American Cheese takes a deep dive into the world of artisanal cheese (yes, there is an entire subculture). With his signature humor, Berkowitz details his journey from novice to cheese aficionado. Set on this path after attending a cheese tasting at a well-known New York City cheese shop, he spends the next year and a half traveling the world seeking to become an expert. He frequents cheese festivals and the World Cheese Awards, visits American cheesemakers, takes a jaunt along the California Cheese Trail, participates in Cheeselandia at SXSW, and even attends Strip Cheese, perhaps the world’s only cheese burlesque show. This adventure will entertain all kinds of readers, especially fans of cheese.

I Am These Truths: A Memoir of Identity, Justice, and Living between Worlds by Sunny Hostin – Sunny Hostin is now a co-host of The View and an ABC News legal correspondent, but her path was rocky. Born to a Puerto Rican mother and a black father who married as teenagers, Sunny struggled with a sense of belonging from an early age. Feeling like an outsider with both sides of her family and her peers, Sunny felt isolated and marginalized. As an adult, she says, she has sought to shed that feeling of not fitting in and has worked to create her own identity and sense of self. She uses her platforms to promote equality – gender, racial and economic. The book is an eye-opening account of how many in the U.S. treat those who are deemed different, and it offers ways to make a difference going forward.

Older by Pamela Redmond – TV producer Darren Star’s adaptation of Redmond’s book Younger into a successful television series is the basis for Older, her latest novel. In Older, as she approaches her 50th birthday, Liza Miller publishes her own story, entitled Younger, about how she posed as a millennial when she was in her 40s. Her friend Kelsey wants to adapt the book into a TV series, and Liza ventures to Los Angeles to help write the pilot episode. Redmond’s descriptions of life in Hollywood are laugh-out-loud funny, and the behind-the-scenes look at the television industry is a bonus. While billed as a sequel, Older can easily be read as a standalone novel – the charming book will captivate fans of the TV show Younger while also appealing to those unfamiliar with the original characters. Older is a great escape from 2020.

A Solitude of Wolverines by Alice Henderson – The first installment in a new series, this fast-paced mystery stars wildlife biologist Alex Carter, who is hired by The Land Trust for Wildlife Conservation (LTWC) to study the wolverine population on a preserve in Montana. For decades, a ski resort operated on the land until it was abandoned in the 1990s, and the owner later donated the property to the LTWC. LTWC seeks to determine if wolverines, a threatened species, are still living on the preserve. Alex finds herself housed at the derelict Snowline Resort lodge, a clever setting that ramps up the creepiness factor. While reviewing footage from cameras used to track the wolverines, Carter comes across images of a severely injured man. Eventually, she realizes she has stumbled into the crosshairs of an illegal operation. A Solitude of Wolverines will appeal to anyone who likes an intelligent and timely read.

Standoff: Race, Policing, and a Deadly Assault That Gripped a Nation by Jamie Thompson – On July 7, 2016, five Dallas law enforcement officers were killed and 11 people were wounded when a gunman opened fire at a downtown march protesting the deaths of two black men, Philando Castile and Alton Sterling, at the hands of police officers. Using exhaustive research and extensive firsthand accounts, Thompson provides a balanced accounting of that tragic day and the equally tragic events that led up to it, while also delving into social and political forces that contributed. Her retelling of the shooting and its aftereffects is through the eyes of those present, including the hostage negotiator, a surgeon who treated the officers, SWAT officers in charge of stopping the gunman, a mother of four, and many others. Sadly, a takeaway from Standoff is that not much has changed since 2016.

Romeo and Juliet by Houston Grand Opera at Miller