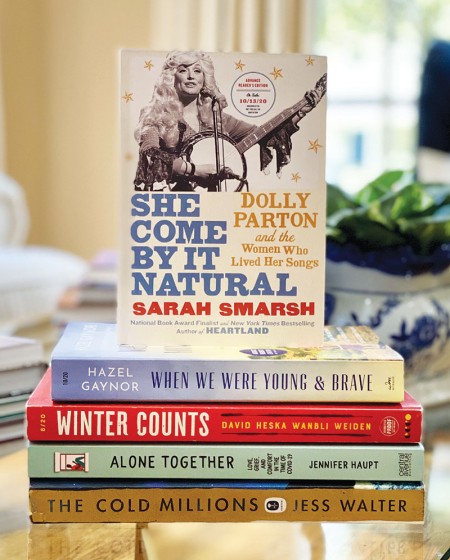 WHAT TO READ This month's picks include a mystery set on the Rosebud Reservation in South Dakota, two nonfiction books about timely issues and two historical-fiction titles. One is about a British missionary school in China during World War II, and one tackles the labor movement in Spokane, Wash., following the turn of the 20th century.

Alone Together: Love, Grief, and Comfort in the Time of COVID-19 edited by Jennifer Haupt –  Paralyzed by anxiety during the early days of the coronavirus outbreak, Haupt decided to rally authors, asking them to contribute an essay, poem, or interview about their experiences during the pandemic. The anthology would benefit struggling independent booksellers through the Book Industry Charitable Foundation (Binc). The responses were swift – 69 authors wrote pieces for the print book, and another 22 are in the e-book and audio editions. Certain contributions resonated with me, including those about spending time with family and reaching one’s limit. However, the beauty of this collection is that, just as the pandemic has impacted each of us differently, the essays and poems will also speak to each reader in a unique way.

The Cold Millions by Jess Walter – In this tale about two brothers, Jess Walter turns his attention to the labor movement in Spokane, Wash. The Cold Millions transports readers to another era when the United States was in the midst of significant upheaval, eerily similar to 2020, but soon after the turn of the 20th century. Walter vividly details life, including vaudeville stars, suffragettes, hobos, union agitators, Pinkerton detectives and tycoons, through the eyes of brothers who strive to move past their upbringing and survive. With his insight into the American experience and events that have built the country, Walter cements his spot as one of the U.S.’s great writers.

She Come By It Natural: Dolly Parton and the Women Who Lived Her Songs by Sarah Smarsh – Smarsh, National Book Award finalist for Heartland: A Memoir of Working Hard and Being Broke in the Richest Country on Earth, returns with an exploration of Dolly Parton and her role in standing up for under-represented women. Throughout her career, Dolly Parton has upended societal norms, fought for what she believes in, and taken on strong female roles in films including 9 to 5 and Steel Magnolias. Smarsh highlights Parton’s songs, such as “Just Because I’m a Woman” and “Coat of Many Colors.” Dollywood – which she started against advice – has contributed about $1.5 billion annually to East Tennessee. Parton’s decades-long ability to remain relevant while staying true to herself is a bright spot in a world where those in the spotlight struggle to stay authentic.

When We Were Young & Brave by Hazel Gaynor – In her latest work of historical fiction, Gaynor brings to life teachers and students at a British-operated missionary school in Chefoo, China. Inspired by a true story, the tale chronicles the group’s experience as captives of the occupying Japanese army during World War II. The Chefoo School educated the children of missionaries and diplomats, and in peaceful times, the teachers were tasked with not only educating but also serving as stand-in parents to children whose parents sometimes left them there for months or years. When Japan declared war on Britain and the United States, the Japanese forces (who had already invaded China) took control of the Chefoo School and eventually moved it to an internment camp, requiring the teachers to help their students weather unimaginable adversity. Alternating between two characters, teacher Elspeth Kent and student Nancy Plummer, Gaynor vividly portrays the horrors of war, life in captivity, the resilience of humans, and the importance of relationships.

Winter Counts by David Heska Wanbli Weiden – Winter Counts is the first book in a new mystery series starring Virgil Wounded Horse, a vigilante enforcer on the Rosebud Indian Reservation in South Dakota who is hired by those seeking justice when the American legal system or tribal council fails them. Heroin has turned up, and its presence has personally impacted Virgil. He heads to Denver to find the heroin’s source and piece together seemingly unrelated events. Weiden’s crisp writing examines life on a reservation today. A member of the Sicangu Lakota nation, Weiden details a broken criminal justice system and challenges faced by those preserving cultural identity while finding a place within their larger community.