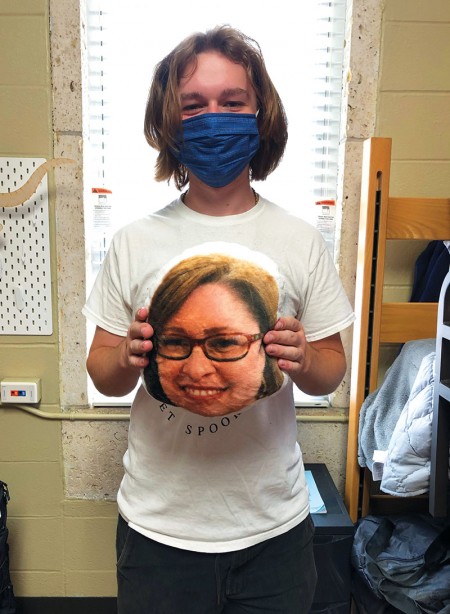 BEST DORM-WARMING GIFT EVER Nothing says, "Happy New Dorm Room!" like a pillow with your mom's face on it.

Comedian Tina Fey said, “You can tell how smart people are by what they laugh at.” If that’s true, then these Buzz-area parents and college students who shared their true texts and conversations score a 4.0.

The face you can’t forget... After a  University of Texas student and his parents finished setting up his dorm room, his mom told him to look at his bed. Staring back at him was his mom’s smiling face on a head-shaped pillow. He started laughing and looked at the other side. It read, “I Love My Mom.”

It’s all squiggly... A mom gave her son a special letter when she dropped him off at the University of Oklahoma. A few days later she asked if he had read it yet. “Mom, thank you so much for giving me that letter,” he said. “I opened it up the other day, but I don’t know what it says because I can’t read cursive.”

Money laundering… Back in August, a Texas A&M mom slipped a $50 bill under her daughter’s fitted sheet, knowing that if her daughter ever took off the sheets to wash them and found the $50 bill, she would call. Three months later, Mom’s still waiting for that call.

It came with a handle… Mom: “Did you ever get a wastebasket to put under your desk?”

Son: “Yes, you can take that off your list.”

Son: “I’m using one of those orange Home Depot buckets. It works great.”

A hot and cold answer…  Mom: “Have you been using the microwave we bought for you and your roommate?”

Daughter: “Yea. It works great. Just this morning I used it to defrost my ice cream.”

A loaded question… A son was texting his mom throughout his first day of doing laundry at Texas State University. It seemed to be going pretty smoothly. That night he reported that it had gone fine, but had taken a really long time because of all the loads. He still didn’t understand why everything had to be separated. The socks load had been so small. Couldn’t he just combine the socks load in with the underwear or shirts load? His mom suddenly realized that he had sorted the laundry by type of clothing and then washed each group separately. One. Load. At. A. Time.

Laundry is harder than AP Physics… Text from an academically gifted female student: “I can mix the whites and the red stuff, right? Also, where do I put the dryer sheets?”

Mom: “When was the last time you washed it?”

Son: “Today. I wash it every day when I use it in the shower.

Fall cleaning or spring cleaning… This Texas Tech Red Raider moved into her dorm with two sets of new sheets. Around the third month of school, her mom asked if she had washed her sheets. The daughter replied, “It’s not time yet, is it? I thought the first set of sheets was for the first semester, and then you used the second set for the second semester?"

At least they’re learning how to save money... Son called home to give an update: “Last night the campus police took my fake ID, but luckily I didn’t get a ticket. I’m not too worried about it because the place where I bought the fake ID gave a discount if you bought six, so I still have five more.”

The comforts of home... “Don’t be thinking I’m homesick because I’m not, but there are certain things I do miss, like sleeping in my own bed and you cooking us dinner, especially that really good frozen pizza from HEB.”

Texas withdrawals… Text from son at Tufts University in Boston: “Mom, can I have my Wranglers and boots, please? I miss them.”

Hand-held hoax… A Colorado State mom was looking for a box that would be the right size to ship a care package to her daughter in Fort Collins. The box from a recently purchased Dustbuster was the perfect size. The next week her daughter called to say thanks for the great surprise and how much she had loved all the goodies inside. But then she confessed that she had been a bit disappointed when she opened the box because she thought there was a Dustbuster inside. Mom shook her head because she never would have dreamed her 18 year old would be excited about the possibility of receiving a Dustbuster.

Best text ever… To a mom who smiled really big after she read it: “Hey, Mom, I met some new friends, and we were all talking about home, and I just wanna let you know that I love and miss you.”