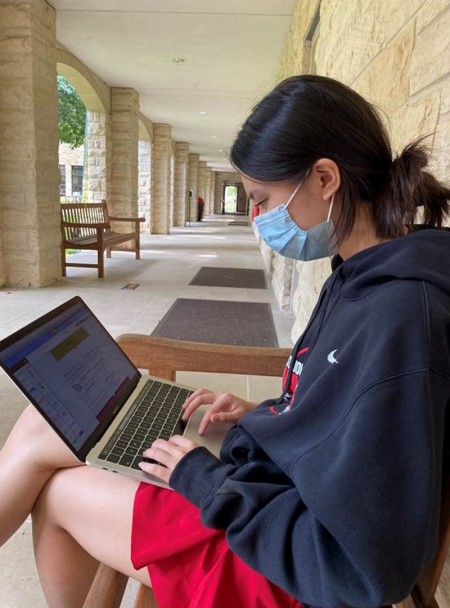 Senior Catherine Dang works outside during a paper work day in English class.

From Sept. 14-Oct. 8, St. John’s School used the Low Density Campus Plan (LDCP), which involved half the students being on campus and half being online each week. Group A was in person during the first week while Group B was online, and then the two switched the following week.

Starting Oct. 13, SJS moved into the Full Density Campus Plan (FDCP), where all students are on campus, except for those who choose to stay online. Prior to the start of the FDCP, I asked people for their reactions to how well they think the Low Density plan was executed, and how they were feeling going into the new plan. I also was curious as to how the first week of FDCP was for students in various grade levels.

Abby Walker, a senior at SJS, thought that though the LDCP was a “necessary step” to transition from online to on campus learning, the “quality of education for the kids at home was significantly worse.” Because her classes are mostly discussion based, she stated that it was difficult to “feel like I was fully a part of the class when I was at home.” For these reasons, she was happy all students were going back on Oct. 13, even though it would pose more of a risk.

Walker added that because students had been respectful in the lower density plan, in that they had been socially distancing and wearing their masks, the FDCP was the right thing to do.

“There were way more students on campus than I expected,” she said. “But the faculty was adamant about wearing masks and following the designated arrows on the floor, in order to safely get to your next class.”

Additionally, Walker was glad that the LDCP gave her two weeks to adjust to the “new normal” before the other half of the school returned to campus.

While she could tell that her teachers were relieved not to deal with Zoom technology as frequently, with the exception of those that stayed home, there were a few hiccups in the plan.

“A few of my classes have the maximum number of students allowed in a class, so every single seat was filled...even though the school said they were going to reduce class sizes this year,” she said.

Freshman John Burnett mentioned that although the FDCP will pose challenges such as crowded hallways, it is better for the SJS community overall, because it will help students return to a more normal life.

After the first week back of the FDCP, Burnett said he was glad to see all his friends in person. Though “sometimes people forgot to social distance, teachers were good at reminding students to spread out, and everyone was very good about wearing their masks.”

On the other hand, senior Sarah Fiedorek thought that the Low Density plan went well, but was nervous that it would be a lot harder to “keep everyone in check” when everyone was back on campus; however, she was pleasantly surprised. Though looking around at a full classroom still makes her a little nervous, it has made her realize just how much of the school experience she was missing out in.

Though many students were nervous going into the FDCP, the combination of the school’s safety provisions and the faculty’s dedication to making sure everyone stayed masked and socially distant helped to settle these nerves and reassure students that the FDCP was the right choice.

“I’m very glad people, especially administration,” she said, “are putting in the work so we can all have a somewhat normal year.”