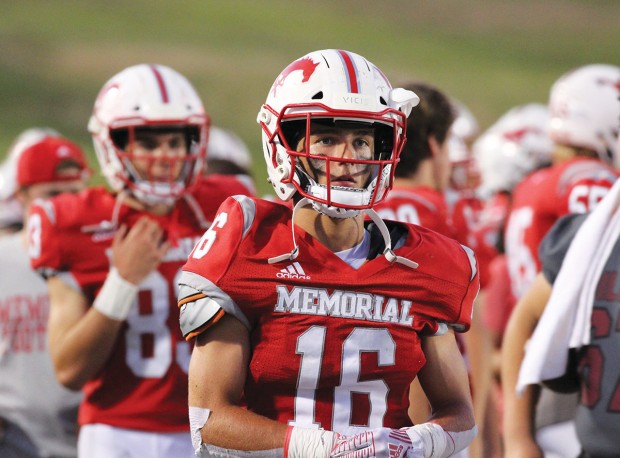 WHAT A GAME Memorial Mustangs running back Carson Zahn led the way in his team’s season-opening victory over Seven Lakes, with 211 rushing yards and three touchdowns on the night.

A four-week delay to the start of the football season was well worth the wait for the Memorial Mustangs, who opened the season with a thrilling 20-15 victory over the Seven Lakes Spartans. The victory for Memorial was even more rewarding considering the earlier threat of no season due to the Covid-19 pandemic.

“It was just awesome to be back playing a real game,” said Mustangs junior Carson Zahn, who led the Mustangs with 211 rushing yards and three touchdowns on the night. A standout on the Memorial baseball team, Zahn saw his baseball season abruptly cut short last spring due to the coronavirus and then faced the devastating prospect of having the football season taken away.

“After we lost the baseball season, the thought of not playing football was tough,” said Zahn. “But myself and my teammates continued to train hard all summer to make sure we were ready. There is nothing like being back on the football field with my best friends and guys I grew up and played football with most of my life. The win had to be one of the highlights of my entire year.”

The win over Seven Lakes also could be a sign of good things to come for the Mustangs. “I feel like this year’s team is extremely and fast and quick,” said Zahn. “We might be undersized, but we play 100 percent at all times. We have about five Division 1 college prospects, and I think we have a good chance to make the playoffs and make a nice run in the post-season.” 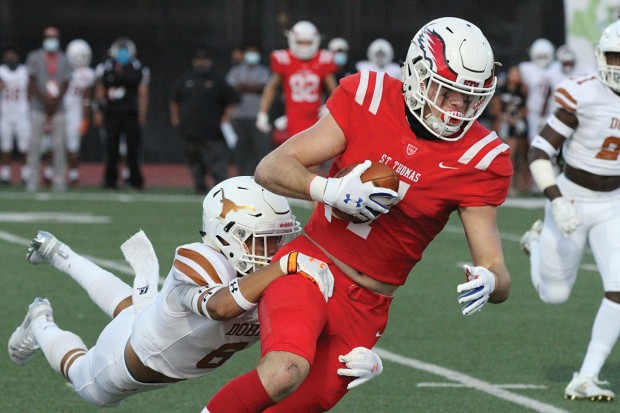 THE NEXT LEVEL St. Thomas senior tight end Drake Martinez is one of several Eagles who will play football at the collegiate level next season. Martinez has committed to play for Colorado State University.

For the St. Thomas Eagles, just getting back in action for an official football game was a welcome relief, despite a season-opening 48-37 defeat to El Campo. “It’s what the kids have been working towards since last November,” said Eagles head coach Rich McGuire. “They just want to play football, so it was pretty awesome to be back on the playing field.”

The season opener was highlighted by yet another big night from Eagles senior quarterback Maddox Kopp, who threw for 456 yards and five touchdowns on the evening. Kopp made headlines before the start of the season with his official commitment to play college football at the University of Houston. “It’s great for our program when you have any kid commit to play major college football,” said McGuire. “In addition, we have several other talented guys who will play at the next level.”

Those high-level collegiate prospects include senior wide receiver Cameron Bonner, who was magnificent in the season opener with 230 receiving yards and three touchdowns. In addition, senior tight end Drake Martinez is committed to playing college football at Colorado State. Along with Bonner and Martinez, Eagles running back John Fontenot, linebacker Vince Lee and defensive back Aidan O'Hare were all named to the Greater Houston Private School Preseason Football Team.

The Kinkaid Falcons admittedly had to shake off a bit of rust in their season opener against Little Cypress- Mauriceville, but, despite falling behind 20-0 in the first quarter, rallied for a convincing 42-26 victory. Quarterback Louis Gustafson spearheaded the comeback win with 256 passing yards and three touchdowns, with wide receiver Dillon Bell hauling in seven of those passes for 90 yards and a touchdown. In addition, Spencer Olsson rushed for 87 yards and one touchdown in the victory.

“After all the uncertainly surrounding the season for so many months and then to wake up on a Friday morning and know that your only concern was playing a game certainly took a load off our minds. It was basically a relief to go out there and play a football game,” said Kinkaid head football coach Nathan Larned. “You look at all the procedures and protocols we all had to adhere to in getting to this point, including approvals to have practices, games, fans and so on, and it was just so exciting for everyone to be playing football again.”

One major distinction as the season unfolds for Kinkaid and its fellow SPC schools is that the SPC has decided to forego its fall championships this season in the wake of the Covid-19 pandemic. “We won’t crown a champion this year, but the nice thing is that we’ll still play our rival schools Houston Christian, St. John’s and Episcopal,” said Larned. “We understand that there are some schools out there who aren’t playing at all this season, so we’re definitely appreciative of now having seven to eight games on our schedule.”